Posted By Marsha West on June 21, 2015 in Homosexual Agenda 1
Share

The decision makers at Tylenol, a popular pain killer, are now attempting to kill God’s design for the family.  The company has decided to promote homosexuality. Monica Cole has the story. 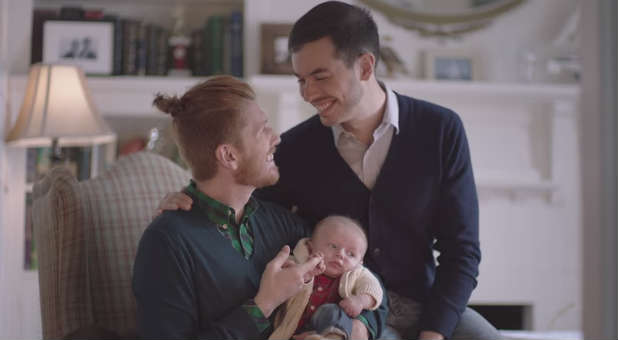 Gay and lesbian couples are featured prominently in Tylenol’s new #HowWeFamily campaign, which aims to change the face of the American family.

A same-sex prom couple and two gay dads with a baby are among those featured in the campaign’s first TV ad. A voiceover declares, “Family isn’t defined by who you love, but how.”

Tylenol is glorifying all modern family types by stating a family is based on love not traditional marriage, and then showing gay couples with their children. One Million Moms believes family is based on love, but this does not justify normalizing sin. 1MM does not agree with the need for Tylenol to support same-sex marriages or couples.

Plus, Tylenol recently used a lesbian couple shown nose to nose in a printed magazine ad. It was included in Good Housekeeping‘s June 2015 issue on page 21, to name one example. At the bottom of the ad it states that Tylenol is a national corporate partner with the Human Rights Campaign.

Companies should advertise the quality of their products, or in this case, how and when to take a medication and why it works. They should not be highlighting who is attracted to whom or who sleeps with whom. This is a marketing decision Tylenol will regret.

This gay-inclusive commercial is attempting to desensitize viewers. There is concern about the way this ad is pushing the LGBT agenda, but an even greater concern is the way that they are attempting to redefine “family.”

Would the Son of God Contradict the Father by Marsha West

CHECK OUT OUR RESEARCH PAPER ON THE HOMOSEXUAL AGENDA