Pastor Gabriel Hughes responds to a piece Dr. Michael Brown wrote on the recent death of Muslim turned Christian apologist Nabeel Qureshi. “Heaven was hardly mentioned in Dr. Brown’s article,” Hughes noted. Not surprisingly a call to repentance by Brown wasn’t given at all. His message was basically, ‘Most people won’t be physically healed, and hardly anyone is ever healed of something major like stomach cancer, even by modern medicine, but pray as though they will be healed anyway, regardless of God’s will.'”

You might say, ‘Obviously, people who die of sickness don’t have enough faith.’ But that would also mean that the many people who prayed for Nabeel, including some used powerfully in healing, lacked faith, too. And if you have so much faith, why didn’t you successfully pray for his healing?

To which Pastor Hughes responded:

Yeah, looking at you, Benny Hinn, Joyce Meyer, Ken and Gloria Copeland, Todd White, and Bethel Church! Where was all the naming it and claiming it for Nabeel?

So with this background in mind, on to Gabriel Hughes’ response to high profile charismatic leader Michael Brown: 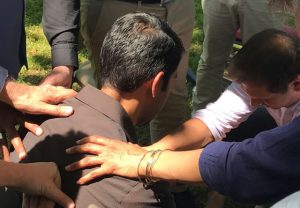 Nabeel Qureshi, best-selling author of Seeking Allah, Finding Jesus, died of stomach cancer this past Saturday at the age of 34. I never met Nabeel, but I followed his ministry and believed him to be a dear brother in the Lord. Nabeel grew up a devout Ahmadi Muslim. His college roommate, David Wood, challenged his beliefs in the Quran, Muhammad, and Allah, and helped lead him to saving faith in the one true God, Jesus Christ (1 John 5:20).

Nabeel spent the last several years as a Christian apologist, and I’ve enjoyed listening to him and Wood. I find their testimonies astonishing, full of the grace of God. Both Wood’s and Nabeel’s stories are amazing in their own right, setting aside the fact that these two men were good friends. Not only college roommates, Wood baptised Nabeel upon his confession of faith.

In August a year ago, Nabeel informed viewers and readers that he had stomach cancer and needed to step away from pursuing his doctorate and the work he was doing with Ravi Zacharias International Ministries. Over the course of his treatment, he provided regular vlog updates through his YouTube channel. I often watched these updates and prayed with him as he led his audience in prayer at the end.

Nabeel prayed for a miracle. He prayed to be healed. And guess what? God healed him! He delivered Nabeel into a healing far greater than he could have asked or imagined. Sickness and death will never touch Nabeel again. This man who once worshiped a false god had turned from idolatry to worship the one true and living God! That itself was miraculous. Jesus said, “I am the resurrection and the life. Whoever believes in me, though he die, yet shall he live” (John 11:25). Nabeel is alive forever with Him in glory. Praise be to the Lord!

Yesterday, several websites, including that Serial of Saint Stalking Sneaky Squid Spirit Silliness known as Charisma Magazine, published an article by Dr. Michael Brown entitled Why Do Some Believers Like Nabeel Qureshi Die of Cancer? Before considering Dr. Brown’s answer, Scripture tells us plainly why people die of cancer — it’s because of sin. Because of Nabeel’s sin? Sure. And because of your sin and because of my sin. All have sinned and fallen short of the glory of God (Romans 3:23), and the wages of sin is death (Romans 6:23).

Your body will suffer from disease, decay, and death. We live in a fallen world subjected to futility by God who cursed creation because of mankind’s sinful rebellion against Him (Genesis 3:17, Romans 8:20). Even people who have faith in Jesus get sick. Sometimes sickness is a judgment on a person because of unrepentant sin (1 Corinthians 11:29-30, James 5:16), sometimes it’s just the natural course in a fallen world, and sometimes it’s God’s will for a person to get sick.

Paul got sick while he was traveling through Galatia, so he stopped to preach the gospel, people got saved, and God was glorified (Galatians 4:13-14). A man was born blind not because he or his parents sinned, “but that the works of God might be displayed in him,” and then Jesus healed him (John 9:3). God put His own Son to death, for our sake and for His glory (Acts 4:28, Romans 8:32).

If you live long enough to die of a ripe old age, it will not be easy. You will feel death coming on you long before it happens. You might even find yourself wishing to die. We still inhabit sinful flesh in a fallen world, and we will feel the effects of the curse as long as we live in these broken bodies. But we have hope knowing that followers of Christ have been promised a kingdom where Jesus will wipe away every tear, and death shall be no more, neither shall there be mourning, nor crying, nor pain ever again, for the former things will have passed away (Revelation 21:4).  Only Christians will receive this kingdom and are even now His kingdom people — those who have repented of their sin, their record of debt has been nailed to the cross and paid for by the blood of Jesus, they’ve been justified before God by His free grace as a gift, and their dead spirits have been raised to new life in Christ. We have peace with God that surpasses human understanding, for the sacrifice of Jesus has satisfied the wrath of God burning against all the unrighteousness of man.

Those who are in Christ Jesus will never have to experience the wages of sin again after their body has died (or, Lord willing, upon Christ’s return). If you know Jesus and He knows you, this life is the only hell you will ever know. Sickness by comparison is nothing. You might be sick for a few years, but you have all eternity to experience an imperishable, glorified body, in which sickness and death and even sorrow and grief will be no more! (Philippians 3:21)

However, if you do not know Jesus, this life is the only heaven you will ever know. When you die, death and suffering will not end. You will suffer for your sins forever. You would take cancer for all eternity over eternity in hell. So repent, and ask Christ to heal you of the disease in your body — the disease called sin, the most deadly sickness a person has. If you ask Him, He will heal you. He won’t make your life easier, but He will make your eternity glorious.

Isaiah 53:5 says, “But He was pierced for our transgressions; He was crushed for our iniquities; upon Him was the chastisement that brought us peace, and with His wounds we are healed.” By Christ’s shed blood on the cross your sick spirit has been healed and made brand new. Here’s Romans 6:23 again, but this time the whole verse: “For the wages of sin is death, but the free gift of God is eternal life through Jesus Christ our Lord.”  Continue reading