Posted By Marsha West on June 2, 2015 in Homosexual Agenda 1
Share

Mass Resistance has done a thorough analysis of what happened in Ireland.  To win, the radical gay lobby had to spend a lot of money — and they did.  Estimates range from $17 – $25 million which is roughly 50 times what was raised and spent by pro-normal marriage groups. And homosexual activists did what they do best.  They played on the Irish people’s emotions. People were repeatedly told that those opposed to same-sex “marriage” are opposed to democracy, will damage lives, are against human rights, will hurt Ireland’s international reputation, will hurt Ireland’s economy, are in favor of discrimination, against love, hateful and the list goes on.

Following is the Mass Resistance analysis: 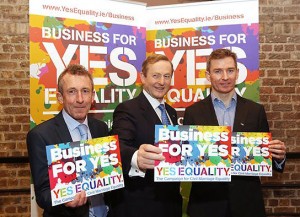 Last Friday’s 62% vote in Ireland to legalize “gay marriage” has been hailed as a triumph of progressive thinking by the mainstream media and the political establishment. The outcome shocked many in the pro-family movement. But what the mainstream press isn’t reporting is even more shocking.

There is no question that the secularization of Ireland, the weakness of the Catholic Church and refusal of the Pope to intervene, the corrupt political class, and the relentless pro-gay media were all contributing factors to the “gay marriage” vote.

But the “Yes” vote would still most likely have failed if it had been a normal Irish election. Those same general conditions existed in many places here in the U.S. from California to Maine where “gay marriage” failed to win a popular vote.

This “culture war” election was conducted under extraordinary conditions that have never been seen anywhere before in the West. As we described in our pre-election article, virtually all of the effort to pass “gay marriage” in Ireland came from massive funding from the United States – primarily a billion-dollar pro-gay foundation, Atlantic Philanthropies –  in a sophisticated campaign spanning over a decade.

Background: Years of referendum losses by the LGBT movement

To understand how this Irish election was won, a bit of history from the U.S. is in order.

Most of us forget that for over 20 years, the idea of a “gay marriage” referendum passing anywhere seemed next to impossible. From 1998 to 2009, there were 31 statewide votes to completely ban “gay marriage.” All of them won. Some won by majorities as high as 80%. Even in Massachusetts, the LGBT lobby fought furiously to keep a “gay marriage” ban from coming to a vote. Their own leaders had come to believe that the only way they would make any “progress” in the U.S. was through the courts.

The big LGBT turnaround in 2012

Then, after the their 2009 “gay marriage” referendum defeat in Maine, the homosexual movement decided to craft an entirely new approach toward elections.

They brought together groups of political strategists, psychologists, pollsters, organizing experts, and various “think tank” types. They meticulously studied the data and their election experiences and designed a new set of strategies and tactics to win against their “right wing” adversaries.

They created a sophisticated propaganda campaign. They shipped thousands of activists into key voting areas to canvass door to door. In order to soften the average people toward homosexuality and create an animus against traditional religious values, they resurrected many of the “big lie” techniques used by the 20th-century totalitarian movements. For example, people were told over and over that not allowing “gay marriage” was bad for the economy and that only backward, ignorant, and superstitious people were still against it. Homosexuality was said to be the next phase of the Civil Rights movement. A key talking point was that by supporting “gay marriage” you are “on the right side of history” – a Marxist concept (later used by the Third Reich).

Fundraising became a major part of the strategy. For earlier elections they had casually raised about the same amount (or less) than the pro-family side. But now, they would tap the “gay” moneymen for very large sums of money.

And it all worked. In November 2012 they won all four statewide “gay marriage” referendum votes: Maine (a re-vote), Minnesota, Maryland, and Washington. In those races they spent between five and ten times as much as the pro-family side. Their propaganda was shrewd – for instance, putting forward friendly faces of “gay” couples who seemed just liked everyone else. Their winning margins were not large (between 51% and 53%), but they won.

Shortly after the 2012 wins, the LGBT movement published an article in a Maine newspaper describing much of their “turnaround” process. And since then, they’ve been virtually unstoppable.

Decisions ahead for Irish churches after country adopts same-sex marriage

One Response to What really happened in Ireland’s “gay marriage” election: Massive US-funded “gay” blitzkrieg as never seen before.