Many people believe that Jonathan Cahn is a modern day prophet and that his books contain “special revelation.” For this reason his books have become best sellers, especially in Christian circles.  His first book, The Harbinger, sold like hotcakes and as a result he became a sought after speaker and frequent guest on the radio talk show circuit. His most recent book, The Mystery of Shemitah, is also a best seller.

We urge our brethren to exercise extreme caution–and spiritual discernment–before diving into one of Jonathan Cahn’s books. 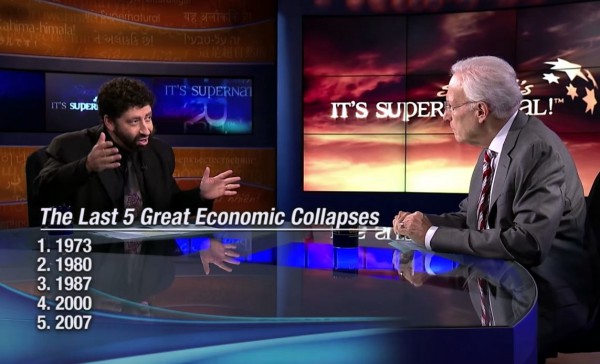 Jonathan Cahn promoting his book to It’s Supernatural host Sid Roth who, time and time again, has shown an astonishing lack of discernment.

When the Most High gave to the nations their inheritance, when he divided mankind, he fixed the borders of the peoples according to the number of the sons of God. But the Lord’s portion is his people, Jacob his allotted heritage. (Deuteronomy 32:8-9 ESV)

Jonathan Cahn, a popular Christian author, claims that his books reveal mysteries and predict the future. He thus portrays himself as like the Biblical prophets, including the claim of having new revelations. The main point of his book is that America is a second Israel and that she is being judged according to the seven-year Sabbath law called “shemitah” that was given to ancient Israel. This judgment manifests itself in seven-year cycles of stock market collapses or other cataclysmic events. The next one is due the fall of 2015, according to Cahn. I will show that these claims are false and that Cahn is not a true prophet of God.

The apostle Paul claims that he was chosen by God to reveal mysteries as were the other apostles. The gospel itself was the mystery of which he spoke. We see this in Ephesians 3:

that by revelation there was made known to me the mystery, as I wrote before in brief. By referring to this, when you read you can understand my insight into the mystery of Christ, which in other generations was not made known to the sons of men, as it has now been revealed to His holy apostles and prophets in the Spirit; to be specific, that the Gentiles are fellow heirs and fellow members of the body, and fellow partakers of the promise in Christ Jesus through the gospel, (Ephesians 3:3-6)

A mystery is something that would not be known had God not chosen to reveal it through His appointed spokespersons. These are Moses and the prophets in the Old Testament, and Christ and His appointed apostles and prophets in the New Testament. The writings of the Biblical prophets in Scripture are inerrant and infallible. In the Scriptures we have revealed all the mysteries that will be known until Christ returns.

However, Jonathan Cahn, who is not one of the Biblical prophets, claims to reveal mysteries: “The Harbringer and The Mystery of the Shemitah are not only revealing mysteries but also the sounding of the alarms.”1 Cahn’s claim to be a revealer of mysteries is strong and severely problematic: “Much that will be revealed in this book has never before been revealed in written form” (Cahn: 2). This is a rather bold claim that echoes the apostle Paul’s cited above. He claims to have special revelation like the biblical authors. The problem is that Cahn did not see the resurrected Christ and was not appointed by Him like Paul and the other apostles. Cahn has no standing as an apostle or prophet and his writings are not binding as Scripture is.

Referencing his previous book Cahn repeats his grand claim: “The Harbringer contains 14 major revelations or mysteries” (Cahn: 4). Unlike Paul and the other apostles, Cahn was not personally taught by Christ, but he still claims prophetic status based on subjective, inner voices: “I heard an inner voice say, ‘There’s a mystery here. You must seek and find it” (Cahn: 9). Religious leaders claiming special revelations and special status are nothing new. Hundreds of false groups have started that way. We need to decide whether to believe anyone who claims special revelation beyond Scripture.

When Questions Imply Everything and Teach Nothing 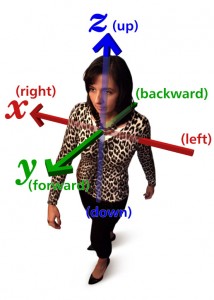 One of the annoying characteristics of many postmodern writers is to use questions that seem to make a claim but have built-in deniability. I noticed this trend when researching the Emergent movement for a book I wrote. They ask questions but refuse to make objective statements, thus creating confusion while appearing to teach something. Cahn follows a similar process, filling his books with suggestive questions so that readers have to scour through every word (as I did) to find out if these are meant to be definitive statements. For example: “Could the mystery of the Shemitah still be at work—moving, impacting, and altering the course of world history—even in the modern world, even in our day”? (Cahn: 42). So he creates confusion with a question, when in fact this is a claim he is making—which I will show is a false one. The Law of Moses that requires cancelling all debts every seven years is not binding on any but Israel in the Old Testament, so it can hardly be the key to world history. Cahn is the master at sowing confusion.

Is America the New Israel?

Cahn often repeats what I call our national myth—that America is somehow the new Israel. This myth goes back to beginning of our history but cannot be sustained by any biblical standard. The myth is based on the belief that man can unilaterally make a covenant and bind God to it, without God having agreed to anything. Cahn claims, “Embedded in America’s foundation is a prophetic warning. The warning was given on America’s first day as a nation. It concerns what will happen if America should ever turn away from God” (Cahn: 21). For such a warning to be valid and binding, it would have to be issued by an infallible prophet who speaks for God, in this case, beyond scripture. Who, exactly, is America’s Moses, or Jesus, or the apostles? Lacking any such person, God cannot have stated that America is Israel and has a binding covenant. That she does is our national myth.

The truth is that God draws out the boundaries of all nations through His providence. The truths revealed in Romans 13 and elsewhere about how Christians relate to civil governments applied to Rome when Paul wrote and all civil governments in history. Only Israel was directly established by God and had a binding covenant mediated through Moses who God chose and appointed. America has neither a Moses nor a binding covenant. We are not the new Israel and never have been. The moral laws of God that do apply are found in the Bible and they apply to all people in all nations.

Cahn falsely claims that any nation can become a covenant nation: “Such a prophetic sign could be given to any nation as long as that nation in some way matched the description or shared the attributes of ancient Israel in 586 BC” (Cahn: 56). Cahn obviously fails to understand what Moses taught in Deuteronomy 32:8, 9 (cited at the beginning of this article). Only Israel was directly under Yahweh, all the other nations are under the “sons of God.” No other nations had an Exodus, a Sinai, or a Moses. All nations are ruled by God’s providence and are under the principalities and powers (‘sons of God’ of Deuteronomy 32:8). America is no exception. Cahn again repeats our national myth: “Those who founded America not only foretold its future blessing—but also gave warning. It was this: If America ever turned away from God, then the same judgments that fell upon ancient Israel would fall upon America” (Cahn: 61). Israel had Moses and the prophets who spoke inerrantly for God. Who speaks bindingly for God beyond Scripture for America? There is no such person.

I reject Cahn’s claim that America is somehow Israel. All the moral laws of God always apply to all peoples in all nations. They are revealed in Scripture. All geo-political entities have boundaries that are drawn out by God in His providence and have leaders that His providence allows. In these important ways America is like all nations. We are not Israel. Furthermore, no man or nation has the power or authority to bind God to a man-made, unilateral covenant. Unilateral covenants in the Bible are established by God, not man. We need to reject the myth that America is a special covenant nation and start thinking Biblically rather than mythologically.  Continue reading

29 Responses to When A False Teacher Calls America “Israel”