Posted By Marsha West on September 27, 2015 in Roman Catholicism
Share

Jordan Standridge of The Cripplegate covers the many reasons evangelicals must not unit with the apostate Roman Catholic Church (RCC) even though some of our leaders are doing everything in their power to bring evangelicals and Catholics together under one big tent. Think: Rick Warren, who seems to have forgotten about the Protestant Reformation. But, thankfully, Jordan Standridge hasn’t forgotten.  He reminds us that “the Pope and his cardinals, as well as tradition have undermined Scripture for centuries.” Jordan challenges Roman Catholics to come out of the RCC and join God’s true church. 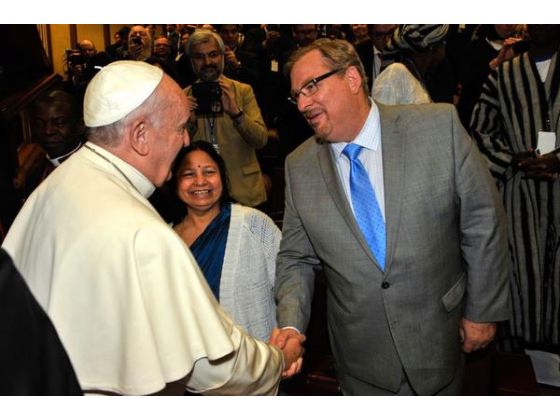 As the evangelical world in America seems rather excited about the Pope’s visit, I can’t help but remember how I felt when I discovered the Evangelicals and Catholics Together document (ECT).

In 1995 the unthinkable happened. Well known evangelical pastors signed a document in which they joined themselves with Catholic priests and Philosophers, in an ecumenical fashion in order to promote the agreements over the disagreements that have plagued Protestants and Catholics for centuries dating back to the greats: Calvin, Luther, Zwingli and Knox. They agreed to no longer “proselytize” each other, agreeing that Catholics are indeed brothers, and sisters in Christ.

This article was successful in its endeavor. The vast majority of Christians in America do not evangelize Catholics. Someone like me who has shed many tears over the deception of the Roman Catholic Church is seen as hateful. I totally understand the desire to believe people are saved. I also desperately want Roman Catholics to go to heaven, but we can’t let our desire for people to be saved or our desire to please men, lead us to cheer them on as they run towards hell. We must love them.

When I first found out about the ECT, I was shocked. I was fresh off the boat and never in a million years did I imagine such confusion over what seemed to be such a clear issue to me and any Italian believer. Most evangelical churches in Italy, many of which we would never step foot into, recognize this truth.

I wondered why there was such confusion in America, and I concluded that it must come down to the Easy-Belivism mentality. In America people believe that all you have to say is, “Jesus come into my heart”, and you are saved, and it doesn’t matter what you actually believe. The devil loves to come as an angel of light.  He loves to be a wolf in sheep’s clothing, and as Spurgeon said, he has created a masterpiece with the Roman Catholic Church. Here are some of the reasons protestants and Roman Catholics will never agree (based on the RCC’s teaching) and why ultimately a Born again Christian who attends a Roman Catholic Church must come out and join God’s true Church.  Continue reading

One Response to Why Evangelicals and Catholics Cannot be “Together”