Posted By Marsha West on May 27, 2016 in Roman Catholicism
Share

Popular blogger, pastor and author Tim Challies, gives three strong reasons that he could never be a Roman Catholic. For those who are not so sure that Catholic doctrine is really opposed to Scripture, this is an important read, as we are admonished in 1 Peter 3:15:

but in your hearts honor Christ the Lord as holy, always being prepared to make a defense to anyone who asks you for a reason for the hope that is in you; yet do it with gentleness and respect.

In Galatians 1:6-8 Paul tells us that anyone who teaches a different gospel is under God’s curse:

I am astonished that you are so quickly deserting him who called you in the grace of Christ and are turning to a different gospel— not that there is another one, but there are some who trouble you and want to distort the gospel of Christ. But even if we or an angel from heaven should preach to you a gospel contrary to the one we preached to you, let him be accursed.

Now listen to Tim give a defense of the true Gospel of Jesus Christ: 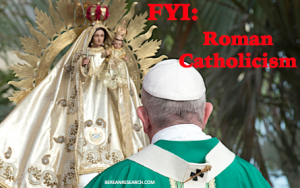 Last week I began a new series titled “Why I Am Not…” and in this series I am exploring some of the things I do not believe as a means to explaining what I do believe. In the last article I explained why I am not atheist and now want to explain why I am not Roman Catholic. The timing of this article is unplanned but rather appropriate. I publish today from Orlando, Florida where I am enjoying some time at Ligonier Ministries, the ministry founded many years ago by Dr. R.C. Sproul. In very important ways the answer to the question “Why am I not Roman Catholic?” is “R.C. Sproul.” But I am getting ahead of myself.

Though my parents were saved into Pentecostalism, they quickly found a home in the Presbyterian tradition and developed deep interests in both church history and Reformed theology. Each of them read extensively in these fields and eagerly taught me what they had learned. In church history they found the long saga of Rome’s battle against Protestants and pre-Protestants while in theology they found her distortion of the gospel. From my early days I was taught that Catholicism is a dangerous perversion of biblical truth and learned the traditional Protestant understanding that its pontiff is the antichrist, the great opponent of God’s people.

As I entered adulthood I felt a growing desire to examine the beliefs I had always assumed to see if I actually held to them independently from my parents. I looked for resources that could guide me and soon came across the works of R.C. Sproul which had largely been written in response to Evangelicals and Catholics Together. Sproul had determined that he would allow the Church to speak for herself through her catechism and official statements and that he would evaluate these through Scripture. He showed a deep, respectful understanding of Catholicism and built a compelling case in which he exposed her most serious problems. Books by James White complemented Sproul’s and under their guidance I came to see that Catholic doctrine really is opposed to Scripture and to the gospel. My convictions about the errors and dangers of Catholicism changed a little bit—I became far less convinced about the connection between pope and antichrist, for example—but overall were sharpened and deepened. I concluded that for a number of reasons I could never be Roman Catholic. Most prominent among them are these three:

I am not Roman Catholic because Rome denies the gospel. Rome has a gospel but not the gospel and, in reality, their gospel damns not saves because it explicitly denies that justification comes by grace alone through faith alone in Christ alone. Rome accurately understands the Protestant position and unapologetically anathematizes it. To the work of Christ it adds the work of Mary. To the intercession of the Savior it adds the intercession of the saints. To the authority of the Bible it adds the authority of tradition. To the free gift of salvation it adds the necessity of human effort. In place of the finished work of Christ on the cross it demands the ongoing sacrifice of the mass. In place of the permanent imputation of Christ’s righteousness it substitutes the temporary infusion of works righteousness. In so many different ways it explicitly and unapologetically denies truth and promotes error. The Roman Catholic gospel is a false gospel.  Continue reading

Yes, Bethel Redding and Bill Johnson are part of the New Apostolic Reformation
Praying Together vs Fervent and The War Room

5 Responses to Why I Am Not A Catholic