Posted By Marsha West on August 22, 2015 in Politics
Share 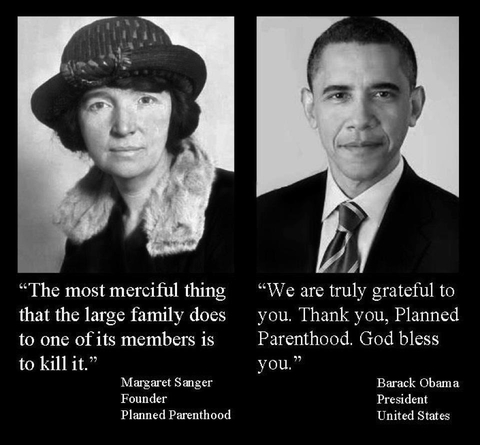 Photo courtesy of We Are the Light Brigade

(The Daily Signal – by Paul Kengor)   Margaret Sanger is a saint in the feminist church. She is a charter member of the progressive hall of fame. Liberals revere this woman who preached “race improvement” and denounced what she called “human weeds”.

Hillary Clinton glows that she is “in awe of” Sanger. She said so in 2009 upon receiving Planned Parenthood’s “highest honor” that year: its coveted Margaret Sanger Award.

Likewise effusive was Nancy Pelosi when she proudly accepted the award in 2014.

Speaking to Planned Parenthood a year earlier, President Barack Obama, hailed the organization founded by this racial eugenicist committed to creating a “race of thoroughbreds” and purging America’s “race of degenerates.”

“Thank you, Planned Parenthood,” and “God bless you,” said Obama to a giddy crowd of ecstatic women. The president commended Planned Parenthood’s “extraordinary” and “remarkable work,” and told the women they do a “great, great job.”

The love by liberals for Planned Parenthood and its founder seems to know no bounds. A professor, blogging at the New York Times, has argued for placing Margaret’s mug on the $20 bill.

And alas, even the Smithsonian, America’s museum, boasts a handsome bust of Sanger in its stately National Portrait Gallery.

Margaret is there enshrined in the Smithsonian’s vaunted “Struggle for Justice” exhibit.

This brings me to my reason for writing here today: a group of angry African-American pastors are demanding the removal of Sanger’s bust from the Smithsonian.

The letter from Ministers Taking a Stand states:

“Perhaps the Gallery is unaware that Ms. Sanger supported black eugenics, a racist attitude toward black and other minority babies, an elitist attitude toward those she regarded as ‘the feeble minded;’ speaking at a rally of Ku Klux Klan women; and communications with Hitler sympathizers. Also the notorious ‘Negro Project,’ which sought to limit, if not eliminate black births, was her brainchild.”