Worldly Christians are more concerned with the affairs of the world than with spiritual things. The Apostle Paul has a lot to say about worldliness in 1 Corinthians. For one thing, Paul makes clear that worldliness is the polar opposite of godliness; therefore, to be worldly is a sin against God. In this piece, Bible study author, speaker and blogger Michelle Lesley tackles the age old problem of the worldly Christian and reveals what she refers to as “sneaky snakes” of worldliness. So, how should believers mortify those sins and respond in a godly way?  Lesley proposes 4 ways to slay the sneaky snake that has slithered into your life and provides the scriptures to slay it.  She writes: 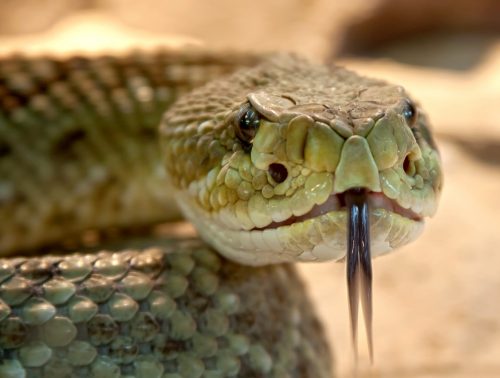 Lately, every time I turn around, I keep bumping up against the same biblical concept. It’s showing up in my personal Bible study time. In Sunday School. In sermons. Even in a revival my husband and I served at this week.

Worldliness, and the need for Christians to be set apart.

God has called His people to be set apart from the world from day one. (OK, day six, if you want to get all technical about it.) You can’t be more set apart than living at an address God personally designed for you and plopped you down in the middle of.

The whole purpose of the Promised Land, the Law, driving out the pagan nations and destroying them, depending on God to miraculously win wars and conquer the enemy, was for God to set apart a people for Himself. To raise up a nation that the rest of the world could look at and say, “Hey, those Israelite folks are different, and their God is different, too. What’s their one God got that our pantheon doesn’t?”.

Jesus reminded God’s people what it looked like to be different and set apart from the world. So did His disciples. And the New Testament is chock full of passages in which the apostles exhort Christians and the church to be holy and distinct from the world in heart, mind, and behavior.

Why? Because being different, and holy, and counter-cultural is weird, and counter-intuitive, and attention-grabbing to the world. And once we’ve got their attention, we’ve got an opportunity to share the gospel with them.

Yes, sister, God has called you to be a weirdo for Jesus.

And you’re going to have to fight the flesh to do it, because worldliness is insidious and subtle. Just like that sneaky, slimy serpent slithered in to paradise with no alarm bells ringing, we modern day Eves often don’t even notice worldliness has slipped in and tempted us to think and act in ways it has never even occurred to us aren’t godly. Sure, we don’t drink, and we don’t chew, and we don’t go with boys who do. And we don’t rob banks or murder people. But is that all there is to it? Avoiding the big, bad, behavioral no-no’s?

Before Eve ever extended her hand to pluck the fruit off the tree, Satan had already won several skirmishes with her heart. He had gotten her to doubt God’s character, disbelieve God’s word, and disregard God’s desires in favor of her own. And isn’t he still doing that with us today? Jesus warned us:

As we look at these four ways worldliness can tiptoe into our actions unannounced and unnoticed, let’s also think about how our actions are merely the fruit of what’s going on in our hearts.

What are some of those sneaky snakes of worldliness, and how can we mortify those sins and respond in a godly way?   Continue reading