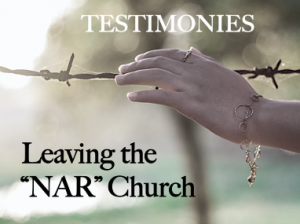 A few years ago I asked our followers if any of them had come out of a New Apostolic Reformation church, and if they’d be willing to share what they experienced, and what happened when their eyes were finally opened to the deception of this insidious movement.

In all, 55 people from all around the world allowed me to include their personal testimonies in this series about a movement called the New Apostolic Reformation, or NAR. It is a movement that we’ve exposed for what it is: An anti-biblical counterfeit that sounds almost like biblical Christianity. Instead, the faith of innocent sheep is often shipwrecked by these doctrines of Satan.

In short, the NAR is a fast-growing Dominionist movement of new Apostles and Prophets who will lead God’s end-times army in establishing His kingdom on earth, by taking authority over earthly and spiritual realms.

(Read: What is the New Apostolic Reformation Movement.)

The following testimonies are the exclusive property of the author and are not to be republished without consent.

Read them here, and share to encourage those who are still trapped in the NAR bondage.