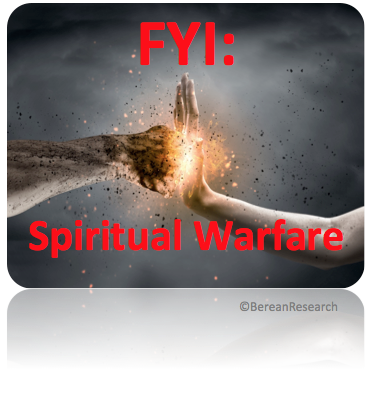 Do not turn to mediums or necromancers; do not seek them out, and so make yourselves unclean by them: I am the LORD your God. (Leviticus 19:31).

Do angels and demons really exist?  The Bible says they do.  Mentioned by name are two elect holy angels (the good guys): The Archangel Michael (Daniel 10:13) and Gabriel who carried messages (Daniel 8:16). Scripture also mentions the Angel of the Lord; the Captain of the Host of the Lord; messengers; and guardian angels.

The Bible tells the story of fallen angels (the bad guys). Lucifer, one of God’s highest angels, led a revolt against God (Isaiah 14:12-14) and was banished from Heaven along with angels who took his side.  Some scholars believe that as many as one third of the angels rebelled against God.

Fallen angels are most commonly called demons. Demons are powerful spirits that can causes all sorts of afflictions.  Read what these odious creatures can do to humans here.

People who contact angels (or a spirit guide) are actually contacting demons.  Demons can and do possess unbelievers but they’re not given the authority to possess believers.  The reason is obvious: the moment of regeneration the Holy Spirit takes up residence in the believer – and He never leaves. Listen to the words of Jesus:

And I will ask the Father, and he will give you another Helper, to be with you forever, even the Spirit of truth, whom the world cannot receive, because it neither sees him nor knows him. You know him, for he dwells with you and will be in you. (John 14:16-17)

A large number of Christians throughout the world consider themselves to be spiritual warfare prayer warriors. What they do is known as “intercessory prayer.” Most likely these prayer warriors are connected to a deliverance ministry (not a recommended site). Deliverance ministers use “strategic level prayer” to “bind” the “territorial spirits” to remove demons who are in control of organizations, communities, cities and in some cases entire nations so that evangelism will go unimpeded. These demon fighting gladiators believe that poverty and other societal troubles will not be eliminated until “demonic strongholds” are torn down and demons are “bound.”

The aim of the Spiritual Warfare movement (SWM) is to take “dominion” over societal institutions and government. Once they have accomplished this lofty goal they’ll take over the kingdoms of this world and build a literal Kingdom of God on earth. This is known as Kingdom Theology.

What is the basic premise of Kingdom Theology?

[M]an lost dominion over the earth when Adam and Eve succumbed to Satan’s temptation in the Garden of Eden. God “lost control” of the earth to Satan at that time, and has since been looking for a “covenant people” who will be His “extension,” or “expression,” in the earth and take dominion back from Satan. This is to be accomplished through certain “overcomers” who, by yielding themselves to the authority of God’s apostles and prophets for the Kingdom Age, will take control of the kingdoms of this world. (Online source)

Kingdom Theology and deliverance/spiritual warfare prayer stem from the New Apostolic Reformation/Dominionism (NAR/DOM). I’ve covered NAR/DOM in other articles that can be read here. The purpose of this piece is the SWM, as this false teaching has spread through Charismatic and Pentecostal churches like a wildfire on a gusty day and it’s rearing its ugly head in conservative churches.

Many spiritual warfare prayer warriors are sincere people who believe what they’re doing is serious work, thus they don’t enter into it lightly and are very cautious when they engage in intercessory prayer. They also admit that they’re still learning the process of warfare prayer. The process they go through to rid the “client” of demons is called “therapy.” A person who’s cleansed of “cosmic beings” is deemed a “survivor.”

Some in the deliverance ministries put their focus on so-called demon possessed people. As I said, many of them are serious sincere people who do not take exorcism lightly — but the fact remains that they’re involved in an unbiblical practice.

So — imagine for a moment a sixty-five year-old woman who has never seen the inside of a gym, toe to toe with a burly man she believes to be possessed, body and soul, by a cosmic being. After a lengthy conversation with the man, she has determined that he’s possessed by a “demon of alcohol.” So the diminutive woman musters up her courage and glares into the drunk’s blood-shot eyes, “In the Name of Jesus Christ,” she bellows, ” I command you, demon of alcohol, depart from this man!” fully believing she has just sent a demon to the pit of hell. She also believes that the drunk has been set free from the demon once and for all.

You may be asking, “If a ‘demon of alcohol’ does exist, how could the woman know with certainty that it had packed its bags and fled the scene never to return again?”

Before I answer the question, I need to provide some background on angels and demons. For the Christian to get the facts on creatures that dwell in the spiritual realm he or she must go to the final authority on these sorts of things — the Holy Bible. God reveals what He wants us to know about the supernatural world in the pages of Scripture. Anything beyond what the scriptures expressly teach on angels and demons is nothing more than pure speculation. Those in the SWM have taken speculation to a whole new level for the simple reason that much of their doctrine is based on just that — speculation. Also, they claim they’re receiving “new revelation” that replaces the Word of God even though Paul clearly taught that the revelation he and the other apostles received was the complete and final revelation from Jesus Christ. Paul even cursed those who brought a different gospel:

But though we, or an angel from heaven, preach any other gospel unto you than that which we have preached unto you, let him be accursed. (Gal. 1:8)  (Source)

Rachel Tabachnick’s “Strategic Level Spiritual Warfare (SLSW) Glossary.” The terms are defined here (We do not recommend Talk to Action)

An Allegory by Marsha West on Spiritual Warfare and Putting on the Whole Armor of God: The Old Serpent and the Slacker

What the Bible Says:

For the weapons of our warfare are not of the flesh but have divine power to destroy strongholds. 2 Cor 10:4

Finally, be strong in the Lord and in the strength of his might. 11Put on the whole armor of God, that you may be able to stand against the schemes of the devil.  For we do not wrestle against flesh and blood, but against the rulers, against the authorities, against the cosmic powers over this present darkness, against the spiritual forces of evil in the heavenly places. 13Therefore take up the whole armor of God, that you may be able to withstand in the evil day, and having done all, to stand firm. 14Stand therefore, having fastened on the belt of truth, and having put on the breastplate of righteousness, 15and, as shoes for your feet, having put on the readiness given by the gospel of peace. 16In all circumstances take up the shield of faith, with which you can extinguish all the flaming darts of the evil one; 17and take the helmet of salvation, and the sword of the Spirit, which is the word of God, 18praying at all times in the Spirit, with all prayer and supplication. To that end keep alert with all perseverance, making supplication for all the saints, 19and also for me, that words may be given to me in opening my mouth boldly to proclaim the mystery of the gospel, 20for which I am an ambassador in chains, that I may declare it boldly, as I ought to speak. Ephesians 6:10-20