In a piece entitled “LeClaire spills ink over ‘sneaky squid spirit’ attack?” Churchwatch Central (CWC) begins by telling us that their article will show that Pentecostalism and charismaticism are enemies of each other.  CWC points out that the Pentecostal AOG in America condemned the New Order of the Latter Rain, an early charismatic movement, for one of six practices. An excerpt of the minutes of the Twenty-Third General Council is included.

So with this background in mind, here’s CWC’s piece:

LEARNING FROM THE LAUGHABLE LECLAIRE 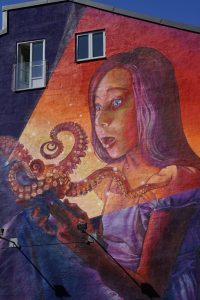 “After this squid spirit attacked my friend, I went to her home to help her battle it. The attack was severe, but when I laid hands on her and commanded the squid to be bound, the most violent symptoms would cease. Of course, when you stand in the gap, you often take a hit. That squid spirit started stalking me. I ended up with a migraine during the battle—a manifestation of that mind control spirit—and was attacked in my mind for days afterwards.”

Is she deceived enough to believe (alongside her NARismatic brethren) that this is a “sneaky squid spirit”? Or is she arrogant enough to think that she, (just like the Sons of Sceva), had the authority over “the squid to be bound.” She was even more deceived to think she could “stand in the gap,” a concept most Christians have of what Christ did on our behalf on Calvary. So her Messiah-like complex is also a major problem when it comes to exorcism. One only needs to read scripture to see what happened with the infamous sons of Sceva who were tricked by a demon to cast out entities by their own authority.

The scriptures suggest that their sin was turning deliverance into a gimmick, using Jesus’ name as a source of magic summoning power to showcase their own might. This is why the devil asked the Sons of Sceva a ‘trick’ question – he knew they would point to themselves, not Jesus.

If anyone thinks they can cast out a demon, you can expect the same result as these poor men if they think authority comes from them in any which way:

“And God was doing extraordinary miracles by the hands of Paul, so that even handkerchiefs or aprons that had touched his skin were carried away to the sick, and their diseases left them and the evil spirits came out of them. Then some of the itinerant Jewish exorcists undertook to invoke the name of the Lord Jesus over those who had evil spirits, saying, “I adjure you by the Jesus whom Paul proclaims.” Seven sons of a Jewish high priest named Sceva were doing this. But the evil spirit answered them, “Jesus I know, and Paul I recognize, but who are you?” And the man in whom was the evil spirit leaped on them, mastered all of them and overpowered them, so that they fled out of that house naked and wounded.” Acts 19:11-16

If this was a demonic spirit, God expects us to get out of the way so His Word can have the authority to set the person free of the demonic influence. It is His Word that does the washing, the cleansing and the freeing. And it is His Word that binds sin, darkness and the devil. It’s never us. We as Christians can find comfort in that. It is GOD who  sets the demoniac free by the power of His Word.

Sadly, it appears LeClaire got her teachings on exorcism from movies.

At best, this entire experience sounds pathetic and laughable. However, if what she said were true, then she put her own life and mental health in danger.

(NOTE: NARismatics believe that Christians can be possessed. However this is an unbiblical belief used by the NOLR/NAR cults so that their ‘Renewed Apostles/Prophets/Evangelist/Shephers/Teachers’ can control their members unethically.

2 Responses to The extreme teaching of Jennifer LeClaire