What exactly is discernment? It means “to distinguish, to separate out by diligent search, to examine.”

Search…examine… “Now these Jews were more noble than those in Thessalonica; they received the word with all eagerness, examining the Scriptures daily to see if these things were so.” (Acts 17:11, emphasis added) The Berean Christians didn’t take Paul’s word for anything. They listened to his teaching and then they went to the scriptures to see if what he taught was true.  Because the Bereans checked Paul’s teaching against Scripture, he commended them saying that they were “more noble than those in Thessalonica.”

Christians who are spiritually discerning are able to properly distinguish between true and false teaching. Those with discernment have wisdom. Moreover, in the Bible we’re told that a true believer possesses the mind of Christ. “The spiritual person judges all things, but is himself to be judged by no one. ‘For who has understood the mind of the Lord so as to instruct him?’ But we have the mind of Christ.” (1 Corinthians 2:15-16)

According to Bible expositor Matthew Henry:

The apostles were not guided by worldly principles. They had the revelation of these things from the Spirit of God, and the saving impression of them from the same Spirit. These things they declared in plain, simple language, taught by the Holy Spirit, totally different from the affected oratory or enticing words of man’s wisdom. The natural man, the wise man of the world, receives not the things of the Spirit of God. The pride of carnal reasoning is really as much opposed to spirituality, as the basest sensuality. The sanctified mind discerns the real beauties of holiness, but the power of discerning and judging about common and natural things is not lost. But the carnal man is a stranger to the principles, and pleasures, and actings of the Divine life. The spiritual man only, is the person to whom God gives the knowledge of his will. … And the apostles were enabled by his Spirit to make known his mind. In the Holy Scriptures, the mind of Christ, and the mind of God in Christ, are fully made known to us. It is the great privilege of Christians, that they have the mind of Christ revealed to them by his Spirit. They experience his sanctifying power in their hearts, and bring forth good fruits in their lives. (Source – bold added)

Before we move on we must add a word of caution from blogger and author Tim Challies.  Speaking on discernment in “How can I increase my spiritual discernment?” he wrote:

So – how do Christians grow in spiritual discernment?  Two ways.  By allowing the Holy Spirit to be their guiding light; likewise, thorough carefully studying the Bible.

What should we do to determine if a person’s teaching is unbiblical? We are commanded to test what’s being taught. In fact, Paul urges believers to “test everything; hold fast what is good.” (1 Thessalonians 5:21) Likewise, John encourages us to “test the spirits to see whether they are from God.” How does one test a spirit?  By reading the scriptures, in context, for that’s where Truth is found. Why is “testing” so important? “For many false prophets have gone out into the world.” (1 John 4:1) False prophets/teachers distort the truth….which is why the Bible refers to them as false teachers and wolves in sheep’s clothing.  It’s no exaggeration to say that a large number of charlatans knowingly—and without a smidgeon of guilt–lie through their teeth. Admittedly, examining someone’s teaching is no easy task.  But nowhere in Scripture are we told that it should be left to “professionals”; it is clearly our responsibility.

We mustn’t ignore the fact that any teaching that fails to line up with what the scriptures say is not from God.  And if the Bible’s not the source of his/her teaching, most likely its source is the “spiritual forces of evil in heavenly places.”  Satan’s not called the father of lies because he’s a truth teller!

Far too many Christians rely on the discernment of other believers, like those of us involved in online discernment ministries. It’s okay to learn from each other (iron sharpens iron), but again, we must do as the Bereans did – test!  Regrettably, when it comes to testing for errors, a growing number of professing Christians deserve a failing grade.

Because so many people spend a huge amount of time on one form of technology or another, it’s easy to see why the views so many evangelicals hold are derived from TV preachers, radio/podcast personalities, best-selling books, popular bloggers and even social media. Many individuals who claim to be evangelicals search religious TV networks such as TBN, Daystar and God TV looking for a spiritual fix.  Unbeknownst to them, they’re exposed to rank heresy taught by Word of Faith (WoF) teachers like Benny Hinn, Kenneth Copeland, Paula White, Joyce Meyer, Fred Price, Creflo Dollar as well as “life coach” Joel Osteen.

If Christians would take the time to test those mentioned above, they’d discover that their teaching is decidedly unbiblical. The fact of the matter is that WoF is a theological cult. What often happens when this fact is pointed out to those who have bought into the teaching of these wolves is that they become defensive, even enraged, take aim and “shoot the messenger.”  Sadly, many professing Christians prefer to hold onto their conspiracy theories, unbiblical philosophies and their distorted view of Scripture than spend time studying the Bible, in context.  As the saying goes: Context, context, context!  Why?  For the reason that taking a verse out of its proper context leads to error. According to 2 Timothy 3:16, all Scripture is “God-breathed” which means that the words on the page are inspired by or come directly from God, not from the writers.  We’re commanded to read, study, and understand God’s Word.  But first we must pray and ask the Holy Spirit for guidance so that we are able to discern the things of God. (1 Corinthians 2:14) In John 16:13 we learn that the Spirit of truth guides us into all truth.

What about believers who claim that they hear directly from God, those who say “God spoke to me”…“God told me” to do ___…”I felt led to___”…I sensed that God wanted me to___”  You fill in the blank.  “There is no divining of the will of God through feelings or extra-biblical visions or pictures that appear in our minds or voices we hear,” says Mike Ratliff. “God will never violate the truths He has given to us in His Word.”

Televangelists, who pretend to have a direct pipeline to God, prance around in front of the TV camera, claiming to hear a “word from the Lord.” At the risk of sounding divisive, most televangelists teach outright heresy (I can prove it), so why would God speak to them at all? Frauds should not expect to hear from God; they should expect to be rebuked by God.

What are we to do about false teachers?  We are to “Take no part in the unfruitful works of darkness, but instead expose them. (Ephesians 5:11) To expose means “to reprove with conviction upon the offender,” says Ratliff.  So we must point out to the offender their error.  And if they do not listen and repent? Then we “prove to the Body of Christ that this is so using the Word of God to show how they are not being obedient to God.” (Source)

The goal for every Christian is to eliminate aberrant and heretical teaching and all that this includes from Christ’s church. The only way for this to happen is for each of us to become a Berean.  So with this I mind, those who love the Lord Jesus must “contend [fight in its defense] for the faith that was once for all delivered to the saints.” (Jude 1:3)

Following is a quote from R.C. Sproul:

Jesus was the most loving person that ever lived and would say “neither do I condemn you. Go and sin no more.” He did not judge in the condemnatory sense but He certainly made a judgment of discernment. And that’s where we get confused. When the Bible tells us not to be judgmental, it means we are not to have a spirit of condemnation towards fallen people. We are to love them, be concerned for them, pray for them—all of that. But we are still supposed to have discernment—to be able to distinguish between what is righteous and what is unrighteous. 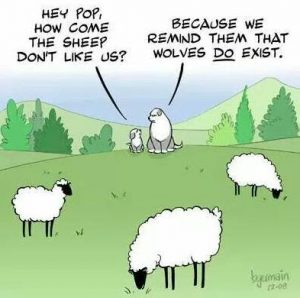 The Discipline of Spiritual Discernment by Tim Challies

Pay careful attention to yourselves and to all the flock, in which the Holy Spirit has made you overseers, to care for the church of God, which he obtained with his own blood. 29 I know that after my departure fierce wolves will come in among you, not sparing the flock; 30and from among your own selves will arise men speaking twisted things, to draw away the disciples after them. 31Therefore be alert, remembering that for three years I did not cease night or day to admonish every one with tears. 32And now I commend you to God and to the word of his grace, which is able to build you up and to give you the inheritance among all those who are sanctified. (Acts 20:28-32)

But false prophets also arose among the people, just as there will be false teachers among you, who will secretly bring in destructive heresies, even denying the Master who bought them, bringing upon themselves swift destruction. (2 Peter 2:1)

About this we have much to say, and it is hard to explain, since you have become dull of hearing. 12For though by this time you ought to be teachers, you need someone to teach you again the basic principles of the oracles of God. You need milk, not solid food, 13for everyone who lives on milk is unskilled in the word of righteousness, since he is a child. 14But solid food is for the mature, for those who have their powers of discernment trained by constant practice to distinguish good from evil. (Hebrews 5:11-14)

For the word of God is living and active, sharper than any two-edged sword, piercing to the division of soul and of spirit, of joints and of marrow, and discerning the thoughts and intentions of the heart. 13And no creature is hidden from his sight, but all are naked and exposed to the eyes of him to whom we must give account. (Hebrews 4:12)

If you just let the modern media soak into your mind without exercising biblical discernment, your mind will be turned to mush (morally as well as intellectually).  So when you watch, read, or listen to anything, Christian or non-Christian, your brain should be in gear, not in neutral.  You need to be interacting with the material in that art form in a manner that is illustrated by the phrase “talking back to your TV.”  Talk back to your music, talk back to your books, talk back to the movie screen—not out loud (though sometimes that might be appropriate!), but in your heart and mind.  And when you see or hear something good, make a note of the truth that is communicated or illustrated.  When you see or hear something bad, make a note of how and why it displeases God, and think about why you should not believe or practice it.  This way you will be “taking every thought captive to the obedience of Christ” (2 Cor. 10:5), rather than allowing your mind to be captured by the deceptive and destructive ideas of the enemy.