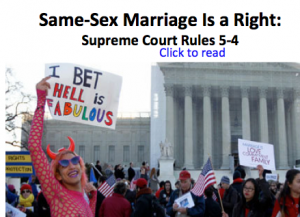 1 Cor 6:9-11 tells us there is no such thing as a homosexual Christian. But the Good News is that Christ’s shed blood covers all sin. Unfortunately, the homosexual agenda’s strategy is to make churches either silent and powerless to speak Truth, or to get them on board as “gay affirming.”

The Homosexual Agenda at its core is a self-centered set of beliefs and objectives designed to promote and even mandate approval of homosexuality and homosexual ideology, along with the strategies used to implement such. The goals and means of this movement include indoctrinating students in public school, restricting the free speech of opposition, obtaining special treatment for homosexuals, distorting Biblical teaching and science, and interfering with freedom of association. Advocates of the homosexual agenda seek special rights for homosexuals that other people don’t have, such as immunity from criticism (see hate speech, hate crimes). Such special rights will necessarily come at the expense of the rights of broader society. The homosexual agenda is the biggest threat to the right of free speech today. (Source)

A step-by-step approach of the homosexual agenda:

Quotes from After the Ball, outlining strategies of the homosexual agenda (Source):

“This conference illustrates just how cleverly deceptive this [Revoice] movement really is, as they manipulate the audience emotionally with heart-wrenching testimonies between each and every session by “homosexual Christians” who have “decided” to be celibate for Christ, for which they surely deserve all the glory and applause!” (Source)

Robert Gagnon addresses his concerns with the Revoice Conference and those who align with the “Spiritual Friendship” program here.

An excerpt from Gagnon’s essay:

The adoption of terminology for self-identity that cannot be sanctified and inevitably brings in the whole “LGBTQ” baggage (“sexual minority,” “gay,” “transgender”). This terminology is normally associated with self-affirmation rather than sin and switches the obligation of the church from a call for repentance and restoration to a call for inclusion and diversity that celebrates what should be mortified. The fact that evangelical proponents of the “sexual minority” language are unwilling to use it of those with a pedophilic or polyamorist orientation should tell us all something. (Source)

What the Bible says about homosexuality: