Posted By Amy Spreeman on November 16, 2014 in Homosexual Agenda
Share 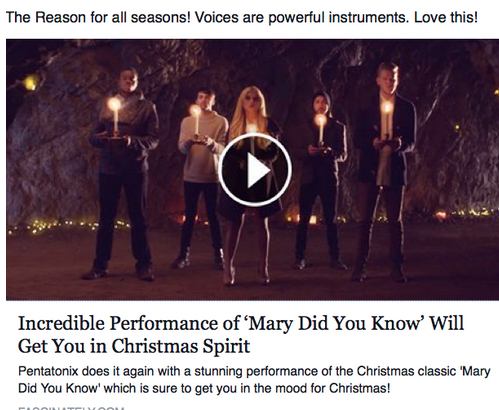 NOTE: The reason for writing/posting about this is not to point fingers at the world, but to ask questions of the visible Church. A big shift is happening, and many are going along with the cultural tsunami rather than make waves being set apart.

This time of year many Christians share beautiful hymns and music commemorating Christ’s first coming foretold in the Old Testament. Yes, most of us are aware that He wasn’t born on December 25. But those of us who celebrate Christmas are doing so because we are joyful that He appeared. And of course we are incredibly thankful for His reason: To give his life as a ransom for many.

So when we hear a beautiful piece of music remembering this amazing advent – a gorgeous a capella song sung by a choir, for instance – we can be overwhelmed with incredible thanksgiving.

One of the most talented new groups singing carols is Pentatonix, a five-member band who has more talent than most of us have ever heard before. I see my friends posting their music videos, and am struck with wonder at how perfectly harmonized these singers are together.

Which brings me to a rather delicate point: Two of the male members of this group are openly homosexual, and actively promoting LGBTQ initiatives. That breaks my heart, because I know it breaks God’s. One thing I need to make clear: Christians must not be pointing fingers at others who are in sin. Yes, Christians are commanded to hold each other to His standard of holiness and love, but we forbidden from judging the world. No, the reason I am bringing this up is because the very people who are supposed to be salt and light (that’s you and me), are more than willing to partake in promoting any brand as long as it’s good. This band is a brand, and it is very good (talented). But they are also being celebrated for something else:

As if their talent wasn’t enough, they’re also big supporters of the LGBT community. Two members of the group are openly gay, Mitch Grassi and Scott Hoying. While competing on “The Sing-Off” Pentatonix visited The Trevor Project headquarters and recorded a PSA for the organization that aired during the season finale. The Trevor Project is the leading national organization providing crisis intervention and suicide prevention services for LGBTQ youth. However, according to The Back Lot, NBC edited the PSA before it aired taking out all of the LGBT references. SOURCE: Fenux -Southern with a gay twist

Also, Pentatonix beat-boxer Kevin Olusola is a professed Christian and has worked with Michael Gungor, who recently had to withdraw from a local Christian concert venue after word got out that he doesn’t believe in a literal Genesis, and that Jesus either may have been wrong when He mentioned Jonah, Abraham, Adam and Eve, the flood and Noah to His disciples.

What are the advantages and disadvantages of being one of two gay members of Pentatonix?

There are actually more advantages than disadvantages. I think it’s a great thing. I love that our fans are so accepting of it. It’s amazing; it makes me feel so close to them.

Some people might say that being openly gay in the music business might deter you from having a career, but I don’t think that’s true. My career, as a queer person, has been pretty successful. We’re still on our way up, but I think we’ve been doing an amazing job.

When members of any musical group are openly celebrating unrepentant sin, how do we react? First, we pray for their salvation, that God would soften their hearts toward Him and that He would send witnesses to them. What’s happening though, is the visible Church is not praying that prayer. Instead it is celebrating diversity and tolerance for sin, making doctrinal compromises to fit in with the changing culture. Knowing that this is the big elephant in the sanctuary, we can do something: We can stand on God’s Word as truth. We can also stop promoting a brand that represents unrepentant sin.

The good news is that there is Good News. Christ came so that we could be forgiven. He died for even the most wretched among us, even me. There is a stack of gifts that awaits those who trust on Him as their Lord and Savior, repent, and trust Him alone: Forgiveness, a new heart and a regenerated life that is His forever.

Should Christians dialogue with obvious apostates and heretics?
Church shopping? 35 Key Questions to Ask the Church

89 Responses to Pentatonix and the elephant in the sanctuary