Dr. Michael S. Horton, Member of the Alliance of Confessing Evangelicals and cohost of the White Horse Inn radio program. penned the exposé on Charles Finney that’s posted over at Monergism: 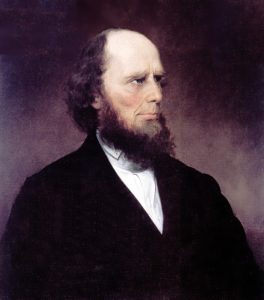 Finney’s message is radically different from the evangelical faith, as is the basic orientation of the movements we see around us today that bear his imprint such as: revivalism (or its modern label. the Church Growth Movement), or Pentecostal perfectionism and emotionalism, or political triumphalism based on the ideal of “Christian America”…

No single man is more responsible for the distortion of Christian truth in our age than Charles Grandison Finney. His “new measures” created a framework for modern decision theology and Evangelical Revivalism. In this excellent article, Dr. Mike Horton explains how Charles Finney distorted the important doctrine of salvation.

Jerry Falwell calls him “one of my heroes and a hero to many evangelicals, including Billy Graham.” I recall wandering through the Billy Graham Center some years ago, observing the place of honor given to Charles Finney in the evangelical tradition, reinforced by the first class in theology I had at a Christian college, where Finney’s work was required reading. The New York revivalist was the oft-quoted and celebrated champion of the Christian singer Keith Green and the Youth With A Mission organization. He is particularly esteemed among the leaders of the Christian Right and the Christian Left, by both Jerry Falwell and Jim Wallis (Sojourners’ magazine), and his imprint can be seen in movements that appear to be diverse, but in reality are merely heirs to Finney’s legacy. From the Vineyard movement and the Church Growth Movement to the political and social crusades, televangelism, and the Promise Keepers movement, as a former Wheaton College president rather glowingly cheered, “Finney, lives on!”

That is because Finney’s moralistic impulse envisioned a church that was in large measure an agency of personal and social reform rather than the institution in which the means of grace, Word and Sacrament, are made available to believers who then take the Gospel to the world. In the nineteenth century, the evangelical movement became increasingly identified with political causes-from abolition of slavery and child labor legislation to women’s rights and the prohibition of alcohol. In a desperate effort at regaining this institutional power and the glory of “Christian America” (a vision that is always powerful in the imagination, but, after the disintegration of Puritan New England, elusive), the turn-of-the century Protestant establishment launched moral campaigns to “Americanize” immigrants, enforce moral instruction and “character education.” Evangelists pitched their American gospel in terms of its practical usefulness to the individual and the nation.

That is why Finney is so popular. He is the tallest marker in the shift from Reformation orthodoxy, evident in the Great Awakening (under Edwards and Whitefield) to Arminian (indeed, even Pelagian) revivalism. evident from the Second Great Awakening to the present. To demonstrate the debt of modern evangelicalism to Finney, we must first notice his theological departures. From these departures, Finney became the father of the antecedents to some of today’s greatest challenges within evangelical churches, namely, the church growth movement, Pentecostalism and political revivalism.

Reacting against the pervasive Calvinism of the Great Awakening, the successors of that great movement of God’s Spirit turned from God to humans, from the preaching of objective content (namely, Christ and him crucified) to the emphasis on getting a person to “make a decision.”

Charles Finney (1792-1875) ministered in the wake of the “Second Awakening,” as it has been called. A Presbyterian layover, Finney one day experienced “a mighty baptism of the Holy Ghost” which “like a wave of electricity going through and through me … seemed to come in waves of liquid love.” The next morning, he informed his first client of the day, “I have a retainer from the Lord Jesus Christ to plead his cause and I cannot plead yours. “Refusing to attend Princeton Seminary (or any seminary, for that matter). Finney began conducting revivals in upstate New York. One of his most popular sermons was “Sinners Bound to Change Their Own Hearts.”

Finney’s one question for any given teaching was, “Is it fit to convert sinners with?” One result of Finney’s revivalism was the division of Presbyterians in Philadelphia and New York into Arminian and Calvinistic factions. His “New Measures” included the “anxious bench” (precursor to today’s altar call), emotional tactics that led to fainting and weeping, and other “excitements,” as Finney and his followers called them. Continue reading

The Dangers, Results, and History of Decisional Regeneration — Mark Kielar