The eight-year-strong Catalyst franchise conference aimed at millennials has long pushed a leftist social justice message rather than the Gospel of the Cross. But as we see more and more leadership conferences pushing the message of UNITY, I’ve been noticing of late the premiere Catalyst Conference is spreading a wider net to include Word of Faith and Dominionism (NAR) celebrities. This year’s theme doubles down on unity, with “Uncommon Fellowship.” Here are this year’s seeker-mergent growth gurus gathering Oct. 5-7 in Atlanta: 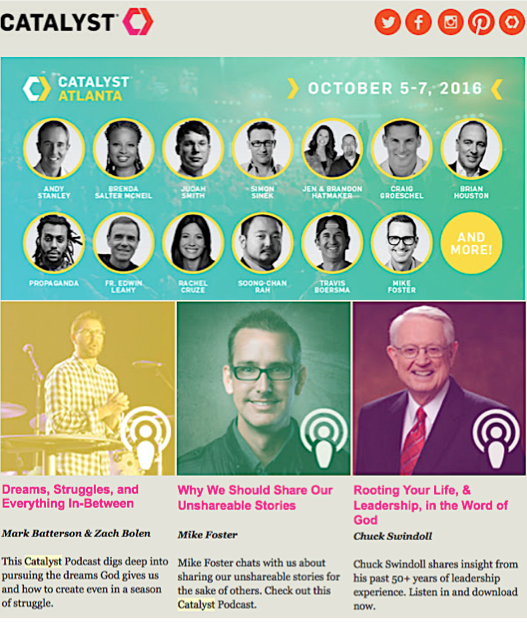 A couple of links to check if you’re not sure what’s wrong with this picture: Brian Houston, Andy Stanley, Craig Groeschel, Judah Smith.

What’s Chuck Swindoll doing there, you might ask? You may be surprised to know he has been a part of Catalyst almost from the beginning, not as a speaker necessarily, but as one of its contributors. Swindoll was Catalyst’s 2009 lifetime achievement award winner. Here’s the podcast in which he speaks about brokenness, accountability and why it is dangerous to be successful. Yes, he actually speaks about Jesus, and the perils of fame. Perhaps some of this year’s celeb speakers should go back and take a listen. Perhaps someone should let Swindoll know that his involvement lends credibility to the wolves.

I’ve been to Catalyst, and I can tell you that amid the iPad giveaways, circus tricks (I watched someone being shot out of a cannon), and the Doritos commercial the audience helped film, Jesus Christ is not glorified. I can also tell you that a wide range of doctrines not of Scripture are included in the ever inclusive net of unity. Check out what Catalyst is all about:

Why don’t you recommend GOOD teachers for a change?
Why Jory Micah pushes our buttons