Author Warren B. Smith asks a really good question: Why on earth would anyone name a beloved pet Judas? In “The Shack” one of the characters, Missy, has a cat named Judas, which is strange because Judas was among those in Jesus’ inner circle and a trusted friend, yet he betrayed our Lord for 30 pieces of silver.  Smith draws an interesting parallel between Judas the betrayer and Shack author William Paul Young.  He writes: 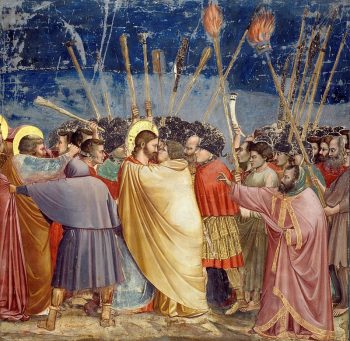 Kiss of Judas by Giotto

The name Judas has been described as the most hated name in all the world. Except for Shack author William Paul Young and maybe a few exceptional others, hardly anybody ever names anyone or anything Judas. It is one of those forbidden names like Jezebel or Lucifer that people would never dream of naming their child, their dog—or their cat. The very name denotes a sense of treachery and betrayal. After all, Judas was the one who openly betrayed Jesus and paved the way for His crucifixion. So what was William Paul Young thinking? Why does The Shack’s most endearing character—Missy—have a cat named Judas?1 And it seems especially odd to have a cat with that name in a family where the mother’s faith is described as “deep”2 and Missy is asking sincere questions about Jesus’ death.3

Young contends that The Shack is much more than a fictional novel. He describes The Shack as “theology wrapped in story.” He writes:

Please don’t misunderstand me; The Shack is theology. But it is theology wrapped in story, the Word becoming flesh and living inside the blood and bones of common human experience.4

This is said in spite of the fact that Young’s Shack characters and Shack “theology” frequently mock God and God’s Word with their cryptic humor and clever interplay. To be perfectly blunt, the name Judas fits right in with much of what William Paul Young is teaching. Like Judas, Young betrays Jesus Christ and biblical Christianity with his heretical Shack theology—a Shack theology where there is, among other things, no Devil and no Christ. Neither of them can be found anywhere in the whole Shack story. The Devil is never mentioned because Young would have us believe that evil and darkness “do not have any actual existence.”5 And The Shack’s “Jesus” is never identified as Christ. In fact, the name of Christ is nowhere to be found in the whole Shackstory.6

One well-known pastor gave an impassioned sermon about thirteen heresies he found in The Shack.7 One heresy he did not mention is perhaps the most egregious of all—the panentheistic proposition that God is “in” all things. Incredibly, William Paul Young puts this foundational doctrine of the New Age/New Spirituality/New World Religion right in the mouth of The Shack’s “Jesus.” Young’s “Jesus” states—“God, who is the ground of all being, dwells in, around, and through all things.”8 But this is a false teaching. God is not “in” all things.9 For Young to put these heretical words in the mouth of The Shack’s “Jesus” is an absolute betrayal of the true Jesus Christ.

A Wonderful and Horrible Betrayal

Thus, as Young plays fast and loose with biblical Christianity, should we be surprised that he plays fast and loose with a name like Judas—a name that perfectly describes his role in today’s wayward church. What Young describes as “theology wrapped in story” is really biblical betrayal wrapped in a cunningly devised fable (2 Peter 1:16). The Shack is everything that the true Jesus Christ warned us to watch out for when he said to “be not deceived” (Luke 21:8). And that warning would seem to include authors like William Paul Young who think nothing at all about putting heretical New Age doctrines in Jesus’ mouth and naming a little girl’s cat Judas.

A wonderful and horrible thing is committed in the land; The prophets prophesy falsely, and the priests bear rule by their means; and my people love to have it so: and what will ye do in the end thereof? (Jeremiah 5:30-31)

To read other articles from The Shack series by Warren B. Smith, click here.

See our White Paper on the New Age Movement

Who cares about Hillsong Pastor Carl Lentz slamming shots with Justin Bieber?
The ‘Prophets’ and ‘Apostles’ Leading the Quiet Revolution in American Religion

8 Responses to “The Shack” and a Cat Named Judas