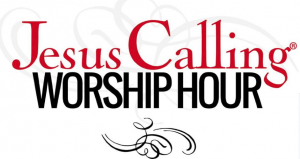 “We’ll be featuring recorded comments, testimonials and stories from Jesus Calling fans just like you sharing how this book has impacted your faith walk,” reported the site.

The site is asking people to share their testimonies. Not about the real Jesus Christ of the Bible, but about the false Jesus that Sarah Young claims speaks to her in a “still small voice” as she writes down everything “He” “says.” This is called “automatic writing,” a technique used by psychics and mediums to channel and communicate with the spirit world. It is sorcery and strictly forbidden by God. (see Deuteronomy 18:10)

Fans were urged to call in on a “special testimonial line” to record their comments which would be aired on future broadcasts. No word on which of the nation’s 400 radio stations will participate in this weekly testimony to sorcery.

For more research into why Jesus Calling is a dangerous franchise, read these:

It’s not too late
What could be wrong with learning to “hear God’s voice”?