The United Nations has launched a biometric registration process for some 245,000 Rwandan refugees living in the Democratic Republic of Congo. The government says it hopes the process will show them how many Rwandans live in the country. Coincidentally perhaps, this is the same year that Rwanda will become the first 100-percent Purpose Driven Nation as it embraces Rick Warren’s P.E.A.C.E Plan. More about that in a moment.

Planet Biometrics is reporting that an unnamed private firm is collecting and storing fingerprints, iris data and photographs for facial recognition, which the government says will cover refugees who fled a genocidal civil conflict in Rwanda in 1994 after the fall of the Habyarimana regime.

The biometric registration is being carried out by the UN’s High Commission for Refugees (UNHCR), according to the Democratic Republic of Congo media.

Part of the Purpose?

This August, Pastor Rick Warren of Saddleback Church in Lake Forest, California, and author of The Purpose Driven Life, will host an unprecedented gathering of pastors and church leaders from all 54 African nations in conjunction with a national day of Thanksgiving.

The All Africa Purpose Driven Church Congress, which is planned for August 6-10, 2015, will be held during Rwanda Shima Imana, a relatively new celebration in Rwanda, a “Day of Thanksgiving” to celebrate reconciliation and gratitude on the anniversary of the Rwandan genocide.

The conference will be the first of five annual continent-wide conferences to take place by 2020, with the second planned to be held in Latin America in 2016, organizers said.

Last year Warren personally arranged to gather over 100 leaders from 30 African nations as well as Russia, China, India and the U.S. to tour the nation and prepare for the 2015 gathering that he calls an “All-Africa Purpose Driven Church Leadership Conference.” It’s the next step in his global P.E.A.C.E. Plan.

“Let’s take the whole gospel to the whole world in a whole new way,” stated Warren, in his email blast to pastors around the globe. If only he would start to include the beginning part of the Gospel (our fallen sinful nature, repentance), and also the rest of it (holiness, sanctification, that sort of thing), which is often lacking in his books and his sermons.

Nonetheless, pastors around the world have embraced Warren’s Purpose Driven model, based on those leaders Warren cites as his mentors: Robert Schuller, Peter Drucker, and Billy Graham:

…a new generation of pastors are ready to be equipped in evangelism, discipleship, ministry, worship and fellowship. So in 2015, I’m going to host an ALL-AFRICA PURPOSE DRIVEN Church Leadership Training Conference in the heart of the continent of Africa in Kigali, Rwanda. Just like Billy Graham, we intend to select and financially sponsor the next generation of key Christian leaders from the 54 African nations to receive this week of training.

Here is his official invitation video: 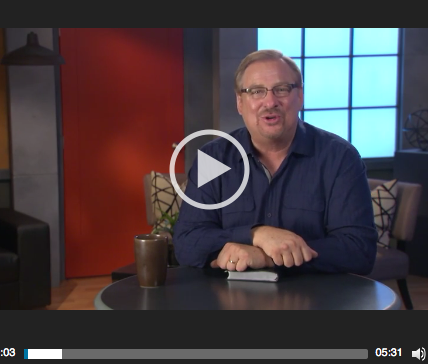 Reminder: What we’re dealing with

Rick Warren was one of the original signers of the A Common Word Between Us and You document with Muslims. His controversial work with Muslims in Orange County during the King’s Way meeting, as well as the controversial teaching of Kingdom Circles (stating those in non-Christian faiths do not need to convert to be saved) at a Catholic conference in France, is just the tip of the ecumenical iceberg.

As of this date, Warren is still a member of the Council of Foreign Relations. In 2013, he announced the launch of three new international campuses, one in Hong Kong, Buenos Aires, and Berlin. All of this is part of Warren’s Global PEACE Plan, a 50-year plan to cure global issues such as “pandemic diseases, extreme poverty, illiteracy, corruption, global warming, [and] spiritual emptiness” and will require the support of all religions. The “P” in his P.E.A.C.E. plan originally stood for “Planting Churches” as the key antidote for curing the world’s ills. Later, however, before a panel and audience of representatives of the world’s religions, he changed the “P” from “Planting Churches” to “Promoting Reconciliation.”

Warren announced unequivocally that the universal problems cannot be solved “without including people of faith and their religious institutions”. He told his audience at the World Economic Forum at Davos , Switzerland ( 1/24/08 ) that the various houses of worship are needed for distribution centers of resources to help eradicate global problems. His shift, however, to an ecumenical program that includes Islamic mosques, Hindu temples, Jewish synagogues, and other religious establishments as participants in meeting social needs may impress the world, but it is contrary to what God says in His Word. The God of the Bible is an exclusive God: “I am the Lord , and there is none else, and there is no God beside me” (Isaiah:45:5) . There is to be no participation with the purveyors of false gods. The Apostle Paul tells us we are not to be “unequally yoked together with unbelievers: for what fellowship hath righteousness with unrighteousness? And what communion hath light with darkness? And what concord hath Christ with Belial? Or what part hath he that believeth with an infidel?” 2 Corinthians:6:14-15 (Berean Call)

Save America – at what cost to the Gospel?
When truth tellers are no longer “on fire”