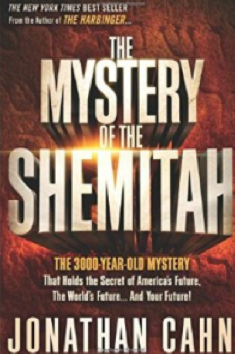 When I saw some recent headlines over at Charisma News like, Keeping the Shemitah Produces Supernatural Results, and, Why Jonathan Cahn’s Prophetic ‘Mystery of Shemitah’ Is Flying off the Shelves, I thought, “what is Shemitah, and why is Jonathan Cahn writing a new book about it?” It wasn’t until this morning that I saw a link to Sid Roth’s show, “It’s Supernatural,” in which Roth interviews Cahn that I began to feel the hairs on the back of my neck rising again. It wasn’t the first time I’d had that reaction to Roth, and Frankly Rabbi Cahn as well, as you’ll see by reading the Related Articles link at the end of this report.

Roth’s interview starts out this way:

Jonathan called me the other day and he said, “Sid, God has given me a revelation. I call it the Mystery of the Shemitah and it’s so big that it affects everything we as a people are personally doing and will affect the rise and fall of the United States of America. You know, the bestselling book, “The Harbinger,” which heeds a warning of judgments, they’re reappearing again. There’s nine of them. But one of the ones that is reappearing is the understanding and the revelation of a biblical term called the Shemitah.

At which point Cahn goes on to describe his extra-biblical revelation about the seven-year cycle of Shemitah, which he says begins September 25 and will result in God shaking the economy and possibly even causing famine in America: 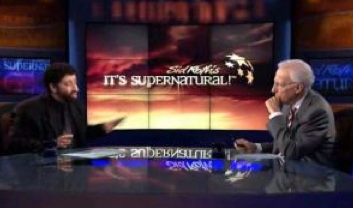 Jesus said for us to look for the signs of the times of His return. The emphasis is not on the signs or on some obscure religious practice, but on Him. I am very concerned that yet another book by someone who is hearing God’s voice will point Christians away from God’s Word and become distracted by a man who is a self-proclaimed prophet. The prophets have spoken and yet we let our Bibles collect dust while we chase after modern-day authors.

Jonathan Cahn, Will Christians be snookered by Shemitah?

Once again the dominionists make it about us rather than Him
“The Holy Spirit Makes a Movie? I don’t think so . . .”

8 Responses to Will Christians be snookered by Shemitah?