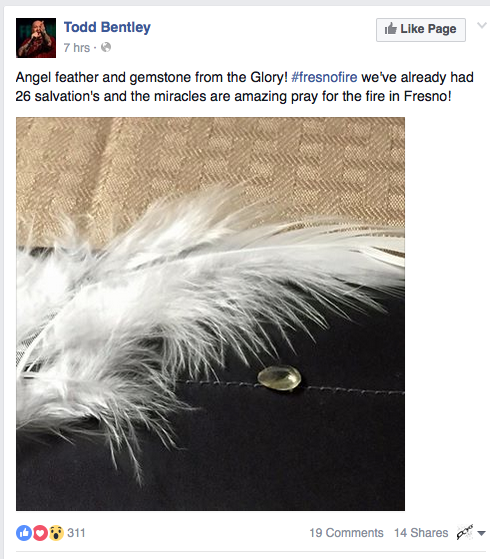 Romans 16:17 tells us to mark and avoid false teachers. Todd Bentley has been marked and (hopefully) avoided by most discerning Christians, but unfortunately he claims millions of followers around the world who are impressed by his “miracles.” Now he has snapped a photo of something that allegedly fell from the ceiling. (Why do these miracles only happen at apostate NAR churches, like Bethel Redding?) 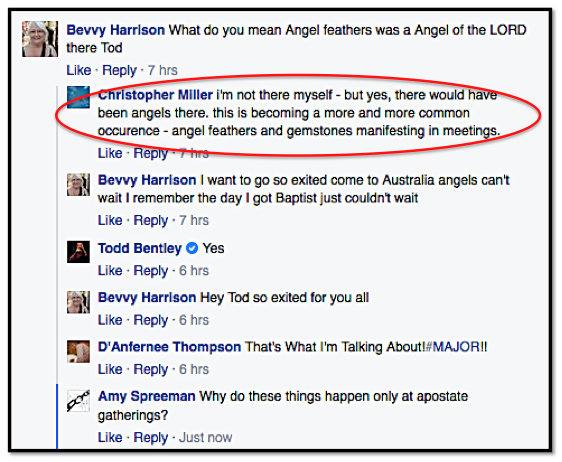 By the way, that gem stone looks a lot like the fish oil capsule I tool this morning.

Is a revival coming? Yes, a false one. Jesus never promised a massive revival in the end days; instead He promised there would be a great falling away from truth and that the love of most would grow cold.

Is our God the God of miracles? Of course He is, but ask yourself if He would ever use a blatant false teacher or use gold dust and gem stones – the riches of this world – to impress people. The biggest miracles God performs involves bringing the dead to life in Christ Jesus. Wow!

Bentley claims he can actually revive dead people. But he can’t.

“Visions of Harvest in America!”

In our first 24 hours in Fresno we have witnessed some incredible miracles. The greatest miracle is 26 decisions for Christ including a sweet lady from Punjab India! The Lord has impressed on me that it is a season of revival Harvest about to take place in the USA! Many revivals in the past have been the Glory, healing, joy, fire and great expressions of the heart of God. This new season of revival and awakening must be the harvest in America. Salvation must be the forefront focus. We have witnessed over 315,000 salvations since Fresno Fire revival last August and are now expecting a million souls to be saved this year. Please pray for us as the miracle realm is easy here in Fresno and we have already had 3 deaf ears healed, vision restored, testimonies of cancer, arthritis and many other glorious miracles as the Lord is moving!

Revival is in the air and I know as the wind of the Spirit blows it will spread everywhere quickly! This revival season will be a moving revival touching coast to coast.

During the last two weeks I have had a open vision of a large revival breakthrough angel standing over the St. Louis archway bridge. The Holy Spirit spoke to me that St. Louis is a major gateway to revival and it would be a key place for the revival of harvest! I saw in the vision a breakthrough revival angel blowing a long silver Jubilee trumpet. The angel also was blowing and releasing the winds of change! There will be a a great St. Louis Missouri outpouring of miracle harvest! I saw many souls coming to Christ. The vision continued as I saw three other angels in Oklahoma City, Tulsa and Wichita Kansas. They were also key areas of revival and harvest. I saw a large harvest net released over these cities. I then saw revival connections as the Angels moved out over Interstates 35, 40 and 44 through Oklahoma City, Tulsa and into Kansas and as far as St Louis Missouri with the strongest release of Harvest power beginning in St Louis Missouri.

Finally, here’s a blast from the past: Remember Todd Bentley’s angel friend, Emma?

Please read and share our White Papers on Spiritual Warfare, the New Apostolic Reformation (NAR), and the Occult.