Megachurch leader Andy Stanley has made some interesting statements over the past few years. Most notably are his statements distancing himself from the authority of Scripture. Easy to mark and avoid a teacher like this, right?

Actually, not so easy. Stanley’s many marketable brands include curricula for children, teens, adults, couples…and many well-meaning church staff will purchase and use the programs – perhaps in your church – without fully realizing the man behind the lessons. (The Orange program for children’s ministries for example.)

Here are a couple of background articles that show Stanley’s drift from the truth of God’s Word:

Getting ‘Unhitched’ from the Old Testament? Andy Stanley Aims at Heresy

Understanding his recent history, check out this interview with Stanley from the Christian Post. Examine his words by holding each statement up to the light of Scripture: 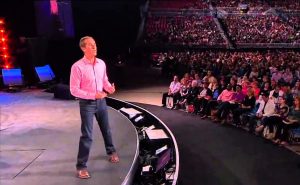 When asked what Christians can do to win people back to church, Stanley responded that he believed even those who are not interested in worship still desire to be loved, “especially when things aren’t going well,” he said in an interview with ChristianBook.com that he shared on Twitter Monday for his new book, Irresistible: Reclaiming the New that Jesus Unleashed for the World.

“Post-Christians could care less about my new sermon series. But they’re still interested in matters of faith and spirituality,” said Stanley.

“And — this is big — most post-Christians still have a crush on Jesus. While modern folks may be hesitant to recognize Jesus as divine, they’re not in the least bit hesitant to laud him as someone whose life is worth imitating.”

Stanley also spoke about reaching out to those who are unchurched, saying he refuses to use the statement “the Bible says,” echoing comments he has made in the past.

“You may or may not already know what the Quran says. But it doesn’t matter. You don’t view it as authoritative.”

“I can tell you from years of personal experience, this approach immediately reduces resistance among post-Christians, nonChristians, and Christians who are struggling to maintain faith,” Stanley added.

Stanley’s book, Irresistible, was released on Sept. 18 and was written in response to the rise in the number of Americans who’ve left Christianity to identify as atheist or “religiously unaffiliated.”

“‘The Bible says’ …. doesn’t carry the weight it once did and thanks to our digital world, folks know ‘what else’ the Bible says without even picking up a Bible. In spite of this, we preach, teach, write, and communicate as if nothing has changed. As if ‘The Bible says it,’ still settles it,” noted the book’s official description.

“According to Stanley, it’s time to hit pause on much of what we’re doing and consider the faith modeled by our first century brothers and sisters who had no official Bible, no status, and humanly speaking, little chance of survival.”

Downplaying the Devil in NAR
Liberation-Not For Everybody