Megachurch pastor Andy Stanley describes the effort to retain much of the Old Testament as “intellectually ruinous and morally debilitating.” Albert Mohler, president of Southern Seminary & Boyce College, disagrees. He argues that because the Lord Jesus and the Apostles did not “unhitch the Christian faith from their Jewish Scriptures” as Stanley urges Christians to do, we should pay no attention to him.  Moreover, Dr. Mohler warns: 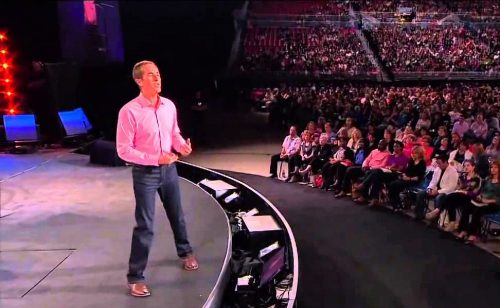 Eventually, we learn to take an individual at his word. Andy Stanley is a master communicator, and he communicates very well and very often. His preaching and teaching often bring controversy, and he quite regularly makes arguments that subvert the authority of Scripture and cast doubt upon biblical Christianity. He returns regularly to certain themes and arguments — so regularly that we certainly get the point. He evidently wants us to understand that he means what he says.

Earlier this year, Stanley brought controversy when he argued in a sermon that the Christian faith must be “unhitched” from the Old Testament. He claimed that “Peter, James, Paul elected to unhitch the Christian faith from their Jewish scriptures, and my friends, we must as well.”

Later, explaining his statement, Stanley told Relevant magazine, “Well, I never suggested we ‘unhitch’ from a passage of Scripture or a specific biblical imperative . . . . Again, I was preaching through Acts 15 where Peter, James, and Paul recommended the first-century church unhitch (my word, I’m open to an alternative) the law of Moses from the Gospel being preached to the Gentiles in Antioch.”

Indeed, in the sermon Stanley did not argue that any specific Old Testament command should be nullified. Instead, he went even further and told his listeners that the Old Testament should not be seen as “the go-to source regarding any behavior in the church.” In his view, the first century leadership of the church “unhitched the church from the worldview, value system, and regulations of the Jewish Scriptures.”

Again, controversy rightly erupted after those comments, spoken earlier this year. But in recent days Andy Stanley has returned to the same theme, this time in a conversation with Jonathan Merritt on his podcast, Seekers and Speakers.

In this conversation, Stanley speaks of outgrowing a childhood belief about the Bible and coming to understand what he presents as a far more complex reality. How complex? Well, Stanley argues that we must know that biblical references to the Scripture “did not mean the Bible.”

“This is something I’m trying desperately to help people understand and every time I try to explain it I get misunderstood so here I go again. There was no “The Bible” until the fourth century. When we think about the Bible we think about a book that contains the Jewish Scripture and the Christian writings and such a thing did not exist until after Christianity became legal and scholars could come out of the shadows and actually put such a thing together.”

“So the early church no one ever said in the early church, ‘the Bible says, the Bible teaches, the Bible says the Bible teaches,’ because there was no ‘The Bible.’ But the point of your question, there was Scripture but every time we see the phrase ‘the Scripture’ or ‘Scripture’ in the New Testament, as you know we have to stop and ask the question, what was this particular group of people referring to because there was no ‘The Bible’ and there was no book that contained all the Jewish Scripture because it was contained in synagogues and as you know virtually no one could read and write.”

Well, wait just a minute. It is true that Jesus and the Apostles did not have the Old Testament and the New Testament bound together in a book (codex) form. It is, of course, also plainly true that the New Testament did not exist until it was given, book by book, by the Holy Spirit to the church in the first century. But it is not true that references to “the Scriptures” or “the Scripture” by Jesus and the Apostles are any mystery to us. They are plainly referring to what we know as the Old Testament. There are references to “Moses and the Prophets” (Luke 16:29) and to the “Law and the Prophets”(Luke 16:16), but faithful Jews in the first century would emphatically have known exactly what the Scriptures are.

As a matter of fact, Mark Hamilton has documented the fact that the Greek phrase, ta biblia, “the books” was “an expression Hellenistic Jews used to describe their sacred books several centuries before the time of Jesus.”

The fact that the Old Testament Scriptures were at the time in scroll form in synagogues rather than book form is plain, but the fact is that the Jewish authorities made their arguments on the basis of appeal to the Scriptures, and so did Jesus and the Apostles. Both Jesus and the Apostles did make their arguments “according to the Scriptures” (see, for example, Paul in 1 Corinthians 15:3-4).

Consider Jesus preaching in the synagogue in Nazareth:

“And the scroll of the prophet Isaiah was given to him. He unrolled the scroll and found the place where it was written, “The Spirit of the Lord is upon me, because he has anointed me to proclaim good news to the poor. He has sent me to proclaim liberty to the captive and recovering of sight to the blind, to set at liberty those who are oppressed, to proclaim the year of the Lord’s favor.” And he rolled up the scroll and gave it back to the attendant and sat down. And the eyes of all in the synagogue were fixed on him. And he began to say to them, ‘Today this Scripture has been fulfilled in your hearing.’” (Luke 4:17-21)