Posted By Marsha West on November 18, 2015 in Discernment 2
Share 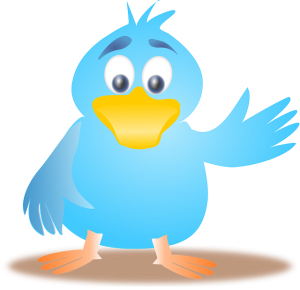 Elizabeth Prada, who blogs over at The End Time,  reports on the case of the disappearing tweet. It seems that one of Mrs. Moore’s tweets suddenly flew the coop (got deleted) which surprised many of her fans.  So Elizabeth fills us in on what took place in Twitterland a couple of days ago: 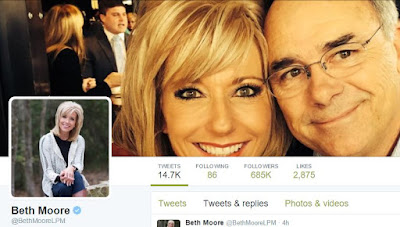 Even some of her followers were puzzled by Moore’s inadvertent unbiblical admission.

I tweeted the following:

A few other people made mention of Moore’ puzzling admission too. And then the usual happened. Usual for these apostate days:

There are a few discernment things to understand here. First, on the literal side of things, Beth Moore’s tweet demonstrates two simple biblical failures. Of course Keith Moore is not “inclined” to study scripture. None of us are. Our flesh always battles Godly disciplines. However the point of the Christian life is that we deny those fleshly indulgences by picking up our cross (Mt 16:24), and we rely on the Holy Spirit to help us overcome the flesh (our ‘inclinations’) to pursue holiness. All of 2 Peter exhorts for growth in godliness and pursuing the holiness our Lord deserves. That Mr Moore gives in to the flesh so as to avoid pursuing holiness is not sanctification.

it’s especially true of husbands who bear the responsibility to lead in a marriage. Your marriage should be a significant source of your wife’s sanctification. Consider Paul’s words to the Ephesians again:

Husbands, love your wives, as Christ loved the church and gave himself up for her, that he might sanctify her, having cleansed her by the washing of water with the word, so that he might present the church to himself in splendor, without spot or wrinkle or any such thing, that she might be holy and without blemish. In the same way husbands should love their wives as their own bodies. He who loves his wife loves himself. (Ephesians 5:25-28)

Clearly, you’re not Christ. There is a sanctifying work that only Jesus can do, but as you model your love on the sanctifying relationship of Christ in the church, you do have a role in your wife’s sanctification. Even if your wife is more spiritually engaged and mature than you are, you still have a responsibility to lead.

Next, moving away from the literal aspects to the conceptual aspects of Moore’s tweet, teachers of God’s word, as Beth Moore claims to be, should be mature, wise, careful, and self-controlled.

Paul advised young Timothy to “set the believers an example in speech, in conduct, in love, in faith, in purity.”

Show yourself in all respects to be a model of good works, and in your teaching show integrity, dignity, and sound speech that cannot be condemned, so that an opponent may be put to shame, having nothing evil to say about us. (Titus 2:7-8).

Titus 2:3 also advises elder women on behavior and comportment in Christian life. As does 1 Timothy 3:11–

In the same way, the women are to be worthy of respect, not malicious talkers but temperate and trustworthy in everything.

I would further state that advice for elder women goes in spades for when they are speaking publicly about their husbands.

On the discernment side, if you’re having red flags about a certain teacher or preacher, one thing to look for is if he or she makes hasty statements. Do they have to retract things often? Do they have to go back the next week and fix a wrong thing they said? I’m not saying teachers don’t ever make a mistake, but if the teacher or preacher you like or follow has a habit of always having to re-explain, correct, or retract, it’s an issue. Real teachers consider their words carefully and speak wisely to minimize such problems, as the 1 Tim 3:11 and Titus 2:7-8 verses says they should do.

I’ve said before that Beth Moore is not qualified to teach partly because of her undignified delivery. She speaks casually, quickly (both in tempo and in heart-haste). Her haste, multitudes of words, and thoughtlessness in her teaching was replicated in posting that tweet for the world to see. It was careless, as evidenced by her almost immediate deletion of it. The Bible says of a person who is hasty in words,

Do you see a man who is hasty in his words? There is more hope for a fool than for him. (Proverbs 29:20)

Be not rash with your mouth, nor let your heart be hasty to utter a word before God, for God is in heaven and you are on earth. Therefore let your words be few. (Ecclesiastes 5:12)

Now someone could say, “Gee, that was one tweet, maybe Beth Moore meant Keith wasn’t inclined to study scriptures with her right then.” That could well be what she meant. So in discernment, we don’t jump to conclusions but we watch fruit grow. LOL, it takes a long time to watch fruit grow. It’s like watching paint dry. It takes time and patience. So, in Keith’s case, is there any? What is the overall, long-term pattern and is there any evidence to support that this is a consistent husbandly failure on his part?

Yes, and yes. The Moores have had a long, public spiritual life. There is much evidence to support that Keith Moore has consistently failed his wife by abandoning the husbandly role, and in so doing, rebelled against his God and allowed a Jezebel-type to be born.  Continue reading

Obama’s praise of Islam: 4-minute montage
Are unrepentant sinners worthy to be baptized?