Heather Clark of Christian News Network has written a piece that we decided to post to alert parents that their child may be attempting to summon a demon.  You heard that right.  Small children are messing around in the spiritual realm.  They’re playing a game called “Charlie Charlie” that’s every bit as bad as Parker Brother’s infamous Ouija board game.

Dabbling in the occult “just for fun” is dangerous for children and adults alike. Thus, God’s people are forbidden to contact the spirit world for any reason.

In her piece, Clark tells us of some of the weird and scary experiences kids who have played “Charlie Charlie” claim they’ve had.  However, we must point out that some of those experiences do not line up with the Bible’s teaching on demons — and we all know that most youngsters have vivid imaginations. 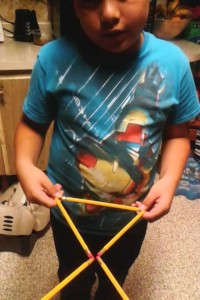 A new challenge being shared on Twitter has youth across the nation and around the world engaging in an Ouija board-like ritual in an attempt to summon a demon.

According to reports, the “Charlie Charlie” challenge involves a Mexican occultist ritual of writing “yes” and “no” on a sheet of paper and crossing two pencils. The ritual is stated to be a type of “rite” for Mexican children.

“Charlie, Charlie, are you there?” those sitting around the paper chant, and then wait to see if the pencils move to point to either yes or no. If yes, those involved ask the demon questions to see how he will answer.

The challenge has gone viral over the past week with a number of teenagers posting videos of themselves engaging in the Ouija-board like practice—some reacting in fear and others finding the matter humorous by using chicken wings or beer bottles for the ritual. The UK-based publication “The Mirror” asked its readers to try the challenge to “see whether it really does work.” Youth responded with reports of hearing eerie voices or seeing strange sights, and some warned others to stay away from the challenge.

“I started to hear noises coming from my room,” one girl named Dakota from New York wrote.

She said that she went to wash the dishes after taking the challenge.

“When I walked in the room, my Bible was on the ground faced down. I told myself it was just the cat. But then I remember my my mom took the cat to the vet. And so I said, ‘Forget the dishes, I’ll do them tomorrow.’ Then I heard a whisper coming from the living room.”

“We we felt like we were surrounded by evil and were being watched,” said Zody from Texas. “[I saw a ] man figure at the top of the steps with black and red eyes.”

One girl from the UK said that she asked the demon if he would kill her and he responded yes. After her friends left her house, the power went out, but she looked out the window and noticed that the lights were working at the other houses on her street. When she attempted to call her parents, the battery died on her phone.

Some are now warning to stay away from the challenge, noting that it is not a game and that it is dangerous to open oneself up to the demonic.

As previously reported, last December, Google reported that searches for Ouija boards had risen 300 percent since October following the release of the film “Ouija.”

“A girl is mysteriously killed after recording herself playing with an ancient Ouija Board, which leads to a close group of friends to investigate this board,” a description of the horror film reads. The friends hold a seance to try to communicate with the deceased girl and find themselves getting in touch with other spirits, unraveling a murder mystery.

By the end of the film, the youth “find out that some things aren’t meant to be played with, especially the ‘other side.’”

But despite the film’s conclusion that “some things aren’t meant to be played with,” the movie reportedly piqued the interest of many of its viewers as Google saw a significant spike in searches for Ouija boards online.

“The fact that people’s intention is to contact the spiritual realm outside the blessings and parameters that God has set out could lead to them to connect with the evil spiritual realm,” Darren Gallagher, a spokesman for Ellel Ministries, told Christian Today. “Therefore such things as Ouija boards are not just harmless fun, but could potentially be spiritually dangerous for those who take part in such things.”

He noted that in the book of Acts, the people “gathered together their occultic objects and burned them because they knew that these practices were not compatible with their new life in Christ.”

Going Against God “Just For Fun” by Marsha West