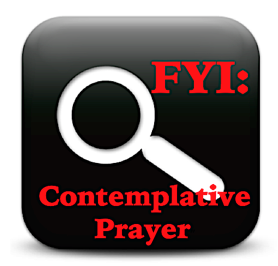 Definition of Contemplative Prayer:  A form of Christian mysticism that allegedly brings about a mystical union with God

The mystical “spirituality” that is so popular in evangelical and charismatic circles today is a yearning for an experiential relationship with God that downplays the role of faith and Scripture and that exalts “transcendental” experiences that lift the individual from the earthly mundane into a higher “spiritual” plane. Biblical prayer is talking with God; mystical spirituality prayer is meditation and “centering” and other such things. Biblical Christianity is a patient walk of faith; mystical spirituality is more a flight of fancy. Biblical study is analyzing and meditating upon the literal truth of the Scripture; mystical spirituality focuses on a “deeper meaning”; it is more allegorical and “transcendental” than literal. — David W. Cloud.

Contemplative prayer (also referred to as centering prayer, breath prayer, meditation or listening prayer) is one of the most esteemed spiritual disciplines taught in spiritual formation. In both practice and purpose, contemplative prayer stands in contrast with what Scripture teaches about prayer. Practitioners believe that one must clear the mind of outside concerns so that God’s voice may more easily be heard and that one may be united with the “divine spark” within.

Advocates of contemplative prayer believe and teach that it is a necessary practice if one desires to become more like Christ. In claiming this, however, they often appeal to the practices of ancient Roman Catholic mystic monks rather than the Word of God.

Contemplative prayer, in its simplest form, is prayer in which you still your thoughts and emotions and focus on God Himself. This puts you in a better state to be aware of God’s presence, and it makes you better able to hear God’s voice correcting, guiding, and directing you…. The fundamental idea is simply to enjoy the companionship of God, stilling your own thoughts so you can listen should God choose to speak. For this reason, contemplative prayer is sometimes referred to as ‘the prayer of silence.’2

Seeks to empty the mind and enter an altered state of consciousness by:

Instructs one to sit in silence, waiting and listening to hear from God:

“Yet God speaks in many ways. We need to learn to listen for His voice. Normally, His voice is not audible … but I wouldn’t want to exclude that possibility. Who am I to say how God will choose to speak?” 5

Understands that what God has revealed in His Word is sufficient; new revelation is unnecessary. 2 Tim. 3:16–17

“There are many terms that seek to capture this dynamic … they all are attempts to capture the same thing: the movement beyond words to an intimacy that requires no words. This intimacy is the kind that lovers know when they give themselves over to the act of lovemaking.” 6

Desires to achieve a “God-consciousness” and a unity with God:

[T]he place to which we are going is one in which the knower, the knowing, and that which is known are all one. Awareness alone remains. The one who is aware disappears along with whatever was the object of consciousness. This is what divine union is.”8

Expects to hear from God, usually through an inner voice or prompting:

“Growing intimacy requires that I pay careful attention to the other person. When that other is God, it’s necessary to still my own voice and listen in quietness. Then I can detect the gentle whispers of the Spirit. Too often we fail to hear God speak because we are not attentively listening.” 9

Understands that prayer is ultimately a form of worship. It should glorify God alone. John 14:13, 14

Understands that prayer is an act of reverence, approaching the very throne of God to receive mercy and find grace.Heb. 4:16

Acknowledges and humbles oneself before the holy God of the universe. Prayer should affirm God’s sovereignty and majesty. Matt. 6:9

“Everything in prayer revolves around who God is, what God wants, and how God is to be glorified. That is the sum and substance of proper praying. 10

The Lord’s Prayer (Luke 11:2–4) offers a model of how Christians ought to pray as it “emphasizes the glory and supremacy of God.”11

Purposes to confess sin and acknowledge our position before God as rebellious sinners (e.g., Dan. 9:5–11;Matt. 6:12): “We are neither worthy of the things for which we pray, nor have we deserved them, but we ask that He would give them all to us by grace, for we daily sin much and surely deserve nothing but punishment.”12

“While God communicates to us through the Bible, we respond to Him in prayer.”13

As noted in the Spiritual Formation research article, the spiritual disciplines are rooted in unbiblical origins. In his book The Sacred Way, Emergent theologian Tony Jones acknowledges that “Centering Prayer grew out of the reflections and writings of the Desert Fathers.”14 These Desert Fathers, however, did not appear until the third century AD, long after the time of Jesus and His Apostle.

Contemplative prayer presupposes that the Christian must seek outside of Scripture to hear all that God is saying, thus Scripture loses its position as the final, authoritative Word from God. The following quotes are from Dallas Willard and Richard Foster, respectively, who are both leading teachers of contemplative prayer:

Many discussions about hearing God’s voice speak of three points of reference, also called ‘three lights’ that we can consult in determining what God wants us to do. These are circumstances, impressions of the Spirit and passages from the Bible. When these three things point in the same direction, it is suggested that we be sure the direction they point is the one God intends for us.15

Only the Bible as a whole can be treated as the written Word of God…. In any case we must certainly go beyond, though never around, the words of the Bible to find out what God is speaking to us.16

While one may indeed “hear” from an entity in the spiritual realm, the voices heard, or impressions received, may not always be from God:

There are other ‘spiritual voices,’ too…. Satan … too will speak in our heart once he sees he no longer holds us in his hand. Only if we learn to recognize this voice as well can we … correctly identify and firmly resist him and make him flee from us (1 Pet. 5:9; Eph. 6:11).17

I also want to give a word of precaution. In the silent contemplation of God we are entering deeply into the spiritual realm, and there is such a thing as a supernatural guidance. While the Bible does not give us a lot of information on that, there are various orders of spiritual beings, and some of them are definitely not in cooperation with God and his way! … But for now I want to encourage you to learn and practice prayers of protection.18

The Christian, however, is told to resist the devil (Jas. 4:7). This would necessarily include rejecting any practice which may engage one in direct communication with the Enemy and his servants.

It is the first half of this verse that is most commonly abused by advocates of contemplative prayer. Psalm 46:10a may also be rendered as “Cease striving and know that I am God…” as it is in the NASB. The context of this verse is one of war and conflict.

“The verb ‘Be still’ (Hebrew, rapah) is used 46 times in the Old Testament with meanings everywhere from describing laziness to ordering relaxation…. In no biblical usage or context does the Hebrew verb enjoin God’s people to meditate or contemplate. Rather, believers are to rest and trust in God.”19 “This is not a contemplative call for reflection but a redemptive call to surrender and to know God personally and intimately before his swift judgment is unleashed (Hab. 2:20; Zeph. 1:7; Zech. 2:13).”20

For God alone my soul waits in silence; from him comes my salvation.PS. 62:1

This verse is used by contemplatives to support the practice of silent waiting before the Lord. However, understood in context, this verse offers a picture of submitting oneself to the Lord, trusting in and waiting patiently for Him to act according to His will. “Only to God did [David] look with complete calmness.”21 “Psalm 62 is not a call to unexpressed contemplation, but rather a song of expressed confidence…. The psalmist is not providing an example for retreating into silence. Rather he is telling fellow believers to go to God.”22

Although God lives in the souls of men who are unconscious of Him, how can I say that I have found Him and found myself in Him if I never know Him or think of Him, never take any interest in Him or seek Him or desire His presence in my soul? 23

Contemplative prayer is a process of inner transformation, a conversation initiated by God and leading, if we consent, to divine union. One’s way of seeing reality changes in the process. A restructuring of consciousness takes place which empowers one to perceive, relate and respond with increasing sensitivity to the divine presence in, through, and beyond everything that exists. 24

This teaching of a “divine spark” existing in all humans contradicts both the biblical doctrine of original sin and the fact that, without Christ, all men are dead in their trespasses and sin (Rom. 3:10–18; 3:23). Pastor Larry DeBruyn teaches:

Parallels to Practices of Eastern Religions

While contemplative prayer mirrors the practices of the Desert Fathers, as noted above, it may also be viewed as a “Christianized” version of what is known as Transcendental Meditation (TM). TM has its roots in Hinduism, 26 and was brought to the West by Maharishi Mahesh Yogi in 1959.27 Maharishi states:

This is strikingly similar to several of the quotations cited above, wherein proponents of contemplative prayer would have the practitioner still himself so as to become more aware of God within.

We should not hesitate to take the fruit of the age-old wisdom of the East and “capture” it for Christ. Indeed, those of us who are in ministry should make the necessary effort to acquaint ourselves with as many of these Eastern techniques as possible…. Many Christians who take their prayer life seriously have been greatly helped by Yoga, Zen, TM and similar practices, especially where they have been initiated by reliable teachers and have a solidly developed Christian faith to find inner form and meaning to the resulting experiences.29

Persisting in such practices as transcendental meditation invariably will lead to universalism, as pastor-teacher Ken Silva demonstrates in his article Meditating on Contemplative/Centering Prayer.

Leaders (to name a few):

On the Dangers of Contemplative Prayer:

A Time of Departing By Ray Yungen

What Does the Bible Teach

Note: Christian Research Network wrote a paper on Contemplative Prayer. Berean Research has obtained permission to extract some of the information and present it here. The original can be found on CRN