Posted By Amy Spreeman on April 10, 2018 in Progressive Christianity
Share 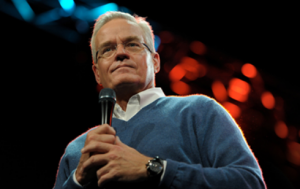 From the Chicago Tribune:

Forty-two years after founding one of the nation’s most influential evangelical megachurches, the Rev. Bill Hybels told his congregation Tuesday night that he would step down from the helm of Willow Creek Community Church six months ahead of schedule.

His departure comes less than a month after a Chicago Tribune investigation disclosed that Hybels had been the subject of inquiries by church leaders into claims that he ran afoul of church teachings by engaging in inappropriate behavior with women in his congregation — including employees — allegedly spanning decades. The inquiries had cleared Hybels.

At times choking back tears, Hybels told the somber crowd at a hastily called meeting at the church’s main campus in South Barrington that, while he continued to enjoy support from within his congregation, the controversy was proving to be a distraction from the church’s mission and work.

Referring to his wife, he said, “It has been extremely painful for Lynne and I to see this controversy continue to be a distraction.”

He also announced that he would not lead the church’s Global Leadership Summit, an annual event featuring leaders from business, government, entertainment and churches hosted by the Willow Creek Association, a nonprofit dedicated to leadership development, where Hybels had planned to focus his energy after retirement.

While saying he believes he has been cleared of all of the accusations, he apologized to the church for how he handled himself. He said he regretted that he reacted in anger when the accusations were made public.

“I apologize to you, my church, for a response that was defensive instead of one that invited conversation and learning,” he said.

Hybels had previously called the allegations against him “flat-out lies.” He also had said that the multiyear effort by former senior leaders of the church to push for an independent investigation was nothing but “collusion.”

On Tuesday, he said he intended to reflect on what has happened and how he reacted.

“I feel the need to look deep inside myself and determine what God wants to teach me through all of this,” Hybels said. “I have complete peace about this decision and I’m not going to rush this process. Your prayers would be much appreciated during this upcoming season of reflection.”

Hybels also said that while the accusations against him have been misleading and “some entirely false,” he apologized for making choices that put him in situations that could be misconstrued.

“I too often placed myself in situations that would have been far wiser to avoid,” he said, adding: “I was naive about the dynamics those situations created. … I commit to never putting myself into similar situations again.”

He has said since May 2012 that he would step down in October of this year.

Willow Creek, which hosts more than 25,000 worshippers a weekend at its main campus in South Barrington and seven satellite sites, made history in evangelical circles last October by naming a woman to succeed Hybels as lead pastor.

Heather Larson, the executive pastor, will take over as chief executive of the megachurch while Steve Carter will become the lead teaching pastor, effective Tuesday.

Larson added that leaders would be working on a way to appropriately honor the Hybels family.

Hybels’ abrupt departure comes days after one of his accusers, as well as a former teaching pastor and a former longtime elder, posted personal blog entries explaining why they made their concerns public when they did.

Vonda Dyer, a former leader of the church’s vocal ministry, who told the Tribune that Hybels kissed and caressed her stomach in an overseas hotel suite 20 years ago, said she stayed silent for decades because she had confronted Hybels privately and believed her encounters were isolated incidents.

Betty Schmidt, a current member and former elder, said that current elders had misrepresented what she told them when she met with them 15 months ago.

“Women need to know that if they muster the courage to tell their stories church leadership will listen with compassion and fairness,” Schmidt wrote. “That has not happened here. Yet. I hope and pray it will.”

The Rev. John Ortberg, pastor of Menlo Park Church in California and a former teaching pastor at Willow Creek, said that women must feel safe coming forward if they have been abused by church leaders.

“In a family, all voices should be heard, and every story should be told,” Ortberg wrote. “This should happen in a setting where there is a balance of power and independent judgment can be made about their accounts. The women cannot and must not be silenced.”

The announcement left many in the mostly full sanctuary stunned and saddened.

After Carter invited the elders and the Hybels family to the stage for a closing prayer, some members of the congregation slowly trickled out of the auditorium. Others stayed in their seats, processing the news.

Jim Tofilon said he believes Hybels was a victim of the #MeToo bandwagon.

“It’s very destructive,” said Tofilon, who has attended the church since 1991. “It worked. It destroyed an old man’s life. Nothing good came out of it. I hope people making the accusations feel satisfied.”

His friend John Stob said that when he received the invitation to the service he knew it “was not going to be a good news night.”

“It felt like walking into a funeral home,” said Stob, who has attended the church for 28 years. But after the announcement, he said it felt a little different.

“I feel sad and hopeful and proud to be part of this church,” he said.

Natalie Sum said she has attended the church since 1984. She was disappointed that the elders didn’t more thoroughly address how they investigated the allegations. While she was sad to see Hybels step down early, she agreed with his decision.

“I know it was the right thing to do,” Sum said. “I think he was right when he said the focus of the church is now being hampered.”

Amy Staska said Hybels’ apology for the defensive way he handled the allegations when they first surfaced was consistent with the pastor she has known since 1994.

“I felt like he owned his initial response and he had a lot of humility, which I appreciated,” she said. “He was who I expected him to be.”

The Chicago Tribune examined allegations investigated by elders and other claims of inappropriate behavior by Hybels by interviewing current and former church members, elders and employees, as well as reviewing hundreds of emails and internal records.

The alleged behavior included suggestive comments, extended hugs, an unwanted kiss and invitations to hotel rooms. It also included an allegation of a prolonged consensual affair with a married woman who later said her claim about the affair was not true, the Tribune found.

Elders of the church — appointed members who oversee Willow Creek’s administration and pastor — had conducted the three reviews after claims about Hybels came to their attention more than four years ago.

Pushing for an independent investigation were three former teaching pastors — one with an allegation of her own — and the wife of a longtime president of the Willow Creek Association.

Some of those pressing for more scrutiny said the church’s prior investigation had shortcomings in their opinion, and at least three leaders of the association’s board resigned over what they believed was an insufficient inquiry.

Francis Chan: “God Might Kill You If You Criticize Church Leaders”
How To Do Online Discernment Ministry, part 1