Posted By Amy Spreeman on September 16, 2015 in Emergent Church
Share 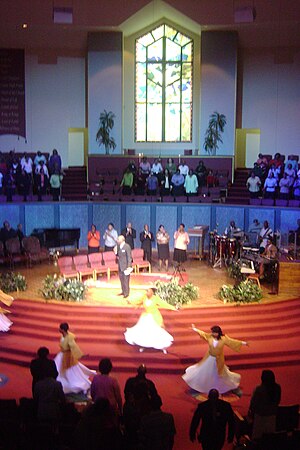 From church marketing, to “seeker-friendly” or “seeker-sensitive” strategies, the visible Church still seems to want to make church all about the “unchurched.” Why is that? Why do we think being part of a church is the end-all “whew!” goal of evangelism? What happens to the saints hoping to be sanctified when church is all about goats rather than sheep? Those terms aren’t mine; Jesus called humans goats and sheep.

Here’s a rather lengthy opinion piece from Berean Call, from about 10 years ago. It’s just as spot on as if it were written this morning, and well worth the read.

The “seeker-friendly,” or “seeker-sensitive,” movement currently taking a host of evangelical churches by storm is an approach to evangelizing through application of the latest marketing techniques. Typically, it begins with a survey of the lost (referred to by a leading church in this trend as the “unchurched,” or “unchurched Harry and Mary”). This survey questions the unchurched about the things their nearby place of worship might offer that would motivate them to attend. Results of the questionnaire indicate areas of potential changes in the church’s operations and services that would be effective in order to attract the unchurched, keep them attending, and win them to Christ. Those who have developed this marketing approach guarantee the growth of the churches that conscientiously follow their proven methods. Practically speaking, it works!
Mega-churches across the country have added bowling alleys, NBA regulation basketball courts with bleachers, exercise gyms and spas, locker rooms, auditoriums for concerts and dramatic productions, and Starbucks and McDonald’s franchises—all for the furtherance of the gospel. Or so it is claimed. Although it’s true that such churches are packing them in, that’s not the whole story in evaluating the success of this latest trend in “doing church.”

The stated goal of seeker-friendly churches is reaching the lost. Though biblical and praiseworthy, the same cannot be said for the methods used in attempting to achieve that goal. Let’s begin with marketing as a tactic for reaching the lost. Fundamentally, marketing has to do with profiling consumers, ascertaining what their “felt needs” are, and then fashioning one’s product (or its image) to appeal to the targeted customer’s desires. The hoped-for result is that the consumer buys or “buys into” the product. George Barna, whom Christianity Today calls “the church’s guru of growth,” claims that such an approach is essential for the church in our market-driven society. Evangelical church-growth leaders are adamant that the marketing approach can be applied–and they have employed it–without compromising the gospel. Really?

First of all, the gospel and, more significantly, the person of Jesus Christ do not fit into any marketing strategy. They are not “products” to be “sold.” They cannot be refashioned or image-adjusted to appeal to the felt needs of our consumer-happy culture. Any attempt to do so compromises to some degree the truth of who Christ is and what He has done for us. For example, if the lost are considered consumers and a basic marketing “commandment” says that the customer must reign supreme, then whatever may be offensive to the lost must be discarded, revamped, or downplayed. Scripture tells us clearly that the message of the Cross is “foolishness to them that are perishing” and that Christ himself is a “rock of offense” (1 Cor 1:18; 1 Pt 2:8). Some seeker-friendly churches, therefore, seek to avoid this “negative aspect” by making the temporal benefits of becoming a Christian their chief selling point. Although that appeals to our gratification-oriented generation, it is neither the gospel nor the goal of a believer’s life in Christ.

Secondly, if you want to attract the lost on the basis of what might interest them, for the most part you will be appealing to and accommodating their flesh. Wittingly or unwittingly, that seems to be the standard operating procedure of seeker-friendly churches. They mimic what’s popular in our culture: top-forty and performance-style music, theatrical productions, stimulating multi-media presentations, and thirty-minutes-or-less positive messages. The latter, more often than not, are topical, therapeutic, and centered in self-fulfillment–how the Lord can meet one’s needs and help solve one’s problems.

Those concerns may be lost on increasing numbers of evangelical pastors but, ironically, not on some secular observers. In his perceptive book This Little Church Went to Market, Pastor Gary Gilley notes that the professional marketing journal American Demographics recognizes that people are

…into spirituality, not religion….Behind this shift is the search for an experiential faith, a religion of the heart, not the head. It’s a religious expression that downplays doctrine and dogma, and revels in direct experience of the divine–whether it’s called the ‘Holy Spirit’ or ‘cosmic consciousness’ or the ‘true self.’ It is practical and personal, more about stress reduction than salvation, more therapeutic than theological. It’s about feeling good, not being good. It’s as much about the body as the soul….Some marketing gurus have begun calling it ‘the experience industry.’” (pp. 20-21)

There’s another item that many pastors seem to be missing in their excitement over “growing your church through attracting the lost.” Although numbers seem to rule in this seeker-friendly mania (an amazing 841 churches in this country have reached the “mega” category, with 2,000 to 25,000 weekend attendees), few have realized that the sizeable increase in church attendance is not due to the influx of the unchurched. During the last 70 years, the percentage of this country’s population attending church has been relatively constant at about 43 percent. A spike of 49 percent in 1991 (years prior to today’s initial seeker-sensitive enthusiasm) gradually declined, returning to 42 percent in 2002 (www.barna.org). From where, then, do those mega-churches, which have outfitted themselves to accommodate the unchurched, get their members? Mostly from smaller churches that aren’t interested in or that can’t afford the fleshly attractions. And what of the supposed horde of unchurched Harrys and Marys who have been assembled? They constitute a very small part of mega-church congregations.

Thousands of churches here and abroad have completely restructured themselves as outreach centers for the unchurched. This, by the way, is not biblical. The church is for the maturing and equipping of the saints, who then go out to reach the lost. Nevertheless, seeker-sensitive churches have turned to entertainment and conveniences in order to attract Harry and Mary and make them feel comfortable in their new church environment. In order to keep them coming back, they have avoided the thorough teaching of Scripture in favor of positive, uplifting messages designed to make them feel good about themselves. As unchurched Harry and Mary continue to attend, they get only a vague hint of biblical truth that might bring conviction of sin and true repentance. Worse yet, they get a psychological view of themselves that undermines that truth. However, as grievous as that situation is, it doesn’t end there.

The vast majority of those who attend seeker-friendly fellowships profess to be believers. Yet most were drawn to those churches by the same worldly allurements that were meant to entice the unchurched, and they continue to attend, being fed the same biblically anemic diet created for the wooing of unbelievers. At best, they receive the skimmed milk of the Word; at worst, pablum contaminated with “profane and vain babblings, and oppositions of science falsely so called” (1 Tim 6:20). Certainly a church can grow numerically on that basis, but not spiritually. Furthermore, there is no opportunity for believers to mature in the faith in such an environment. In defense of seeker-sensitive churches, some have argued that mid-week services are set apart for discipleship and getting into the meat of Scriptures. If that indeed is the case, it’s a rare exception rather than the rule.

Perhaps the most insidious aspect of the seeker-friendly approach to doing church is an attempt to impress the unchurched by looking to and quoting those regarded as the experts in solving all their mental, emotional, and behavioral problems: psychiatrists and psychologists. Nothing in the history of the church has undermined the truth of the sufficiency of God’s Word for “all things that pertain unto life and godliness” (2 Pt 1:3) more than the introduction of the pseudo-science of psychotherapy. Its thousands of concepts and hundreds of methodologies are unproven, contradictory, unscientific, and thoroughly unbiblical, as we’ve documented in our books and in previous articles.

A large part of the evangelical church has developed a pleasure-laden, cruise ship mentality, but it will result in a spiritual Titanic. Seeker-friendly church pastors (and those tempted to climb aboard) need to get on their knees and read the words of Jesus to the church of the Laodiceans (Rev 3:14-21). They were “rich, and increased with goods,” yet failed to recognize that in God’s eyes, they were “wretched, and miserable, and poor, and blind, and naked.” Jesus, standing outside their church, where they had unwittingly displaced Him, offers them His counsel, the truth of His Word, which alone will enable them to live their lives for His pleasure. There can be nothing better here on earth, and for all eternity.

What is the definition of evil?
U.S. priests accused of sex abuse get second chance in South America

4 Responses to Is church for seekers or saints?