Posted By Amy Spreeman on September 14, 2015 in Christian Mysticism
Share 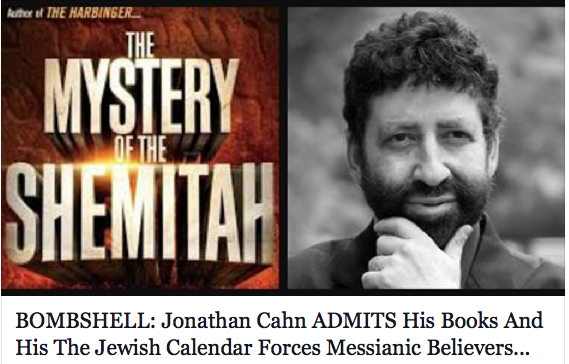 Well, almost nothing. We had a whole bunch of Hebrew Roots Americans jumping on to the fear-wagon promoted in the Mystery of the Shemitah book which claimed that we’re all doomed if we don’t keep the seven-year observation from the Old Testament.

I’ve been warning Christians to not be fooled by the “Shemitah” ever since Messianic Rabbi and book author Jonathan Cahn began pointing Christians to laws meant for the children of Israel.  Cahn claims that “the Mystery of the Shemitah and it’s so big that it affects everything we as a people are personally doing and will affect the rise and fall of the United States of America …”

Because the end of Shamitah was September 13, many self-proclaimed “prophets” have predicted the end of America.  But here’s the thing: NOTHING HAPPENED. Here’s a true or false dilemma: Remember, if a “prophet” predicts something will happen on a certain date and it does not come to pass, that person is a ____ prophet.

Anyone can take any span of time and can make up seven year intervals for all sorts of things. I can say that wars happen every seven years and can find a war in 2001 and another in 2008. The only problem is that a keen eye can also find some battles in 2002, 2003 … and therefore destroy my theory.

The other major fib, Cahn made a “seven-year Sabbatical” as a rule by using the rise and fall of the stock market. Seven-year stock market cataclysms is simply false. We took him on his challenge and he is always welcome to call, we will air the debate (he won’t since he can’t) Cahn knows the gig-is-up.  source

Jesus said for us to look for the signs of the times of His return. The emphasis is not on the signs or on some obscure religious practice, but on Him. I am very concerned that yet another book by someone who is hearing God’s voice will point Christians away from God’s Word and become distracted by a man who is a self-proclaimed prophet. The prophets have spoken and yet we let our Bibles collect dust while we chase after modern-day authors.

76 Responses to Shemitah is over – But nothing happened