For those who haven’t yet heard, “The Shack” author, William Paul Young, is from a New Age/New Spirituality persuasion (like Oprah); likewise, Young rejects the Penal Substitutionary Atonement (that Jesus took the penalty for our sins on the cross). So with this in mind, it’s rather odd that he uses the term “Christian” to describe his religious beliefs.  A mouse in the cookie jar is not a cookie, brethren.

The truth is, Young is a first rate manure spreader. “The Shack,” purchased mainly by the Christian community (sadly) has nothing to do with biblical Christianity. The fact of the matter is that the book is riddled with the worst kind of heresy imaginable. (Read our coverage here.)

Author Warren B. Smith fills us in on Paul Young’s continuing effort to destroy the faith that was once for all delivered to the saints. (Jude 1:3) He writes: 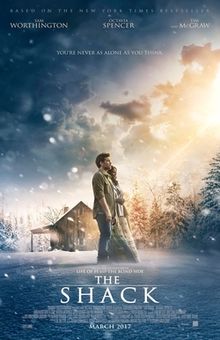 On the March 12, 2017 episode 5 of Restoring The Shack television series on the TBN Christian television network, Shack author Wm. Paul Young stated it is a “lie” to believe that God is “separate” from His creation. Invoking a vision that was reputedly given by God to friend and fellow author C. Baxter Kruger, Young described this alleged lie as the “lie of separation.” But as a former New Ager, I recognized what Young was calling the “lie of separation” was in and by itself a lie. What he was teaching had nothing to do with biblical Christianity and everything to do with the false teachings of the New Age/New Spirituality/New World view. In fact, what Young was attempting to convey to countless TBN viewers was the same thing I had been taught and was teaching when I was in the New Age—that there is “no separation” between God and creation because God is “in” everyone and everything.

But God is not “in” everyone and everything.

As I read the Bible and came out of the New Age movement and saw through the God-“in”-everything deception, I came to understand how our Spiritual Adversary had turned the Bible’s 2 Corinthians 6:17 instruction to “Be ye separate” into a bold lie that turned the whole notion of biblical separation upside down. Taking the word separation and using it in a wholly unscriptural context, false teachers like Wm. Paul Young are now bringing this New Age “lie” about separation and God “in” everything into the church through books like The Shack and on television programs like TBN’s Restoring the Shack.

The God “in” Everything Heresy

The heretical teaching that God is “in” everything and therefore not separate from creation, is the foundational lynchpin of the New Age/New Spirituality/New World religion. Incredibly, this heretical New Age doctrine is taught in The Shack. Wm. Paul Young’s “Jesus” falsely teaches that God is “in” everything when he states, “God, who is the ground of all being, dwells in, around, and through all things.” Most people reading The Shack do not understand that this statement made by Young’s “Jesus” is a New Age lie. Yet Young puts this occult saying right in the mouth of his “Jesus—a false “Jesus” who is “another Jesus” and not the real Jesus Christ (2 Corinthians 11:4). Alert Shack readers will note that the word “Christ” can not be found anywhere—not even once—in Young’s whole Shack story. Inexplicably, the family cat in the story is named Judas but Young’s Jesus is never named Christ. Go figure.

The New Age Doctrine of Oneness

Because God was reputedly “in” everyone and everything, our New Age teachers taught us that we were all “One” and that our “Oneness” with God—our union with God—pervaded everyone and everything. We were told that because there was this “Oneness,” there was no separation between God and creation. And so it was this concept of “Oneness” that singularly expressed our New Age belief in the universal divinity of all things. It seemed very logical. We were all One because we were all in union with God because God was “in” everyone and everything. We honestly believed that a universal acceptance of this universal teaching would bring universal peace. We sensed that humanity was beginning to “awaken” and “shift” into accepting this emerging concept of universal Oneness. We believed if this New Age/New Spirituality/ New World view was universally embraced, it could save the world. Contrarily, those who refused to subscribe to this emerging worldview of Oneness—God “in” everyone and everything—would majorly hinder and ultimately prevent the attainment of this otherwise realizable goal of world peace. The New Age “God” and Christ”—channeling through designated New Age leaders—emphatically stated that the only people who stood in the way of world peace were those who believed in the “illusion of separation.” Wm. Paul Young claiming to quote “God” calls it the “lie of separation.” But what New Age leaders and Wm. Paul Young were teaching about separation was an “illusion” and a “lie.”

Thus, from a New Age perspective, “Oneness vs. Separation” juxtaposes two prevailing but opposing worldviews against each other. “Oneness” is  being hailed as the loving and spiritually correct worldview that will produce world peace and a happy humanity. Contrarily, separation is described as the spiritually incorrect and hateful worldview that hinders world peace and produces a fearful and divided humanity. As seen in the quotes below, the New Age “Christ” makes his bold case for “Oneness” and threatens those who subscribe to the “hatred” of separation. He states:

The oneness of the Creator and the creation is your wholeness, your sanity and your limitless power.9

Let us together show the world: that the need for war is past; that the instinct of man is to live and to love; that hatred is begotten of separation.10

I shall drive from this Earth forever the curse of hatred, the sin of separation.

Continue reading under the heading Satan Is Separation

SEE OUR WHITE PAPER ON THE NEW AGE MOVEMENT