Posted By Marsha West on June 6, 2015 in Christian Mysticism
Share
I wrote this piece a few years ago to bring to light the sad fact that more and more Christians were becoming involved in occult practices.  Well, nothing has changed since I wrote this.  In fact, Christianity is infected with the deadly occult virus, thanks largely to so-called Christian leaders, to include pastors, elders, and Bible teachers.  It’s because of the people we trust the most that “Christian mysticism” has become the norm in the Church.   My hope in re-posting this “oldie but goodie” (with a few minor changes) is to open the eyes of professing Christians who are involved in some of the things I’ve written about below.  Keep in mind that by doing so you’re going against God, and if you are, you must repent.  You have no choice.  You’re in the grip of evil, brethren, so do it now.  Flee from the Kingdom of Darkness! 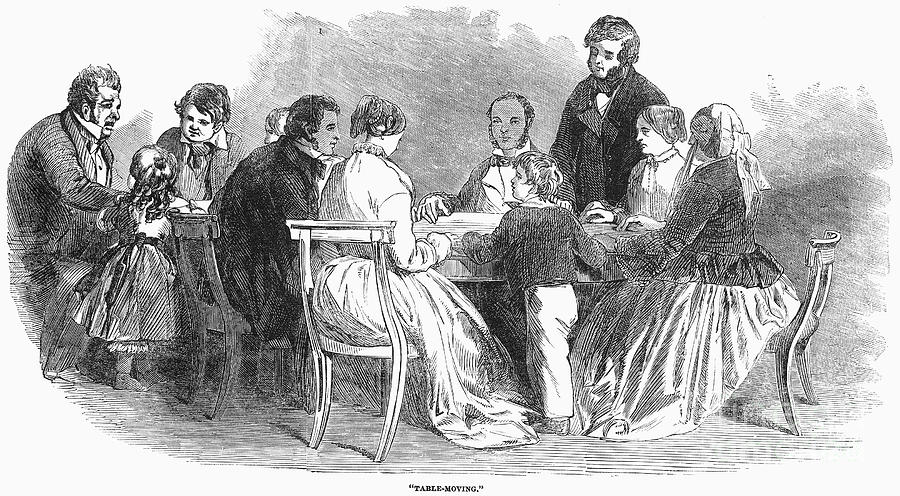 Today we’re hearing a lot about Spiritism or Spiritualism, not to be confused with spiritual or spirituality, as in “I’m not religious, I’m spiritual,” or “I’m into spirituality.” The term Spiritism has replaced what was once called animism and other religious practices involving the invocation of spiritual beings.

Some religions meld Spiritualism with Christianity. For example, a blend of Christian and African folk beliefs that originated in Brazil is now practiced in the U.S. Spiritualism is much the same as Spiritism only it has adopted Christian rites and prayers. People visiting Spiritualistic services can be misled into thinking they’re Christian churches. The problem is Christianity cannot be melded with any other religion or practice.

One of the major tenets of Spiritism is reincarnation. The classic form of reincarnation originated in India in the 9th century BC. Reincarnation has become a hot topic in our post-modern culture.

There are a whole host of beliefs about reincarnation. The most widely touted belief is that upon death one’s spirit exits the body in search of another body to inhabit. Believing in reincarnation gives hope for continuing one’s existence in further lives to work off one’s karma. Karma is broadly defined as the consequences of one’s actions.

The thing Christians need to come to terms with is that belief in reincarnation goes against what the Bible teaches regarding the soul’s final judgment by a holy God. What Jesus Christ clearly taught is that unrepentant sinners are condemned to an eternity in hell. Jesus never mentioned reincarnation – not once!

And as it is appointed unto men once to die, but after this the judgment.

Listen to what Paul says happens when we die:

We are confident, I say, and willing rather to be absent from the body, and to be present with the Lord. (2 Cor. 5:8)

It is imperative that serious Christians view mysticism as evil. When Paul came face to face with the Jewish mystic Elymas, he charged him with being a child of the devil and an enemy of righteousness. Moreover, he accused the mystic of perverting the right ways of the Lord. (Acts 13:10) Through the power of the Holy Spirit, Paul caused him to go blind. Not only did he put out the sorcerer’s eyes, he also put him out of a job! When it came to confronting evil, Paul never backed down, never hesitated, wavered or vacillated. He had all the subtlety of a sledgehammer when it came to evildoers.

God forbids any sort of participation in paganism for our own protection. His reason is simple: its roots are steeped in pagan idolatry and drug use. The occult world is an open door to Satan’s world. Those who enter find themselves on a quest for ‘hidden wisdom’ or ‘deeper truth.’ And, not surprisingly, the sought after ‘hidden wisdom’ is not meant for everyone, it’s meant for a select few such as New Age disciples and gurus.

We call those who possess supernatural power (power’s what it’s all about) shamans, witchdoctors, clairvoyants, trance channelers, spiritists, and the list goes on. So, how does a spiritist go about getting in contact with the spirit world? By receiving radiation, frequencies or vibrations from the dead. “Communication from the spirit world manifests itself in psychical phenomena (e.g., telepathy, clairvoyance, trance speaking, and apparitions) and in physical phenomena (e.g., levitation, automatic writing, and poltergeist and ectoplasmic activities).” (Source)

The Bible tells us that it is God who instigates communication, not man. Generally the Lord will use angels as His envoys to humans. We know very little about angels, either the elect or the fallen. However, the scriptures inform us that on occasion the Lord sent a holy elect angel to Earth to deliver messages. And He also sent angles to minister to people, to protect them, and also to execute His judgment. The angels have one purpose: to glorify God’s holy Name and to carry out His will. 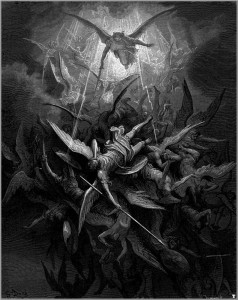 There are also fallen angels – the rebellious ones! The most notorious of the lot is Lucifer aka Satan. The Bible refers to the fallen angels as demons, spirits of darkness and evil spirits. The ones that rebelled against God fell from grace. Consequently, they were hurled out of heaven, lock stock and barrel. “At that point,” says Bible expositor John MacArthur, “Satan gained the rulership of the world, and the term world took on a third meaning: the evil system opposed to God that now dominates this planet.

As I have made clear, Christianity and Spiritism have nothing in common whatsoever. I mean, think about it. Can you trust God and Satan at the same time? Here’s what Paul said:

Be ye not unequally yoked together with unbelievers: for what fellowship hath righteousness with unrighteousness? and what communion hath light with darkness? And what concord hath Christ with Belial? or what part hath he that believeth with an infidel?

And what agreement hath the temple of God with idols? for ye are the temple of the living God; as God hath said, I will dwell in them, and walk in them; and I will be their God, and they shall be my people.

Wherefore come out from among them, and be ye separate, saith the Lord, and touch not the unclean thing; and I will receive you, And will be a Father unto you, and ye shall be my sons and daughters, saith the Lord Almighty. (2 Cor. 6:14-18)

Satan is known as the “father of lies.” Even those who are guided by an “inner voice” can be deceived, warns occultist Nicholas Weeks:

Channels such as [Alice] Bailey are sincere and convinced that their inner voices and visions are real Masters. Unhappily, sincerity is no protection from delusion. In 1884 Master KH wrote to a psychic of that time, giving an explanation for the befuddling of a channel or seer. ‘Since you have scarcely learned the elements of self-control, in psychism, you must suffer bad consequences. You draw to yourself the nearest and strongest influences “often evil” and absorb them, and are psychically stifled or narcotised by them. The airs become peopled with resuscitated phantoms. They give you false tokens, misleading revelations, deceptive images. Your vivid creative fancy evokes illusive Gurus and chelas [disciples], and puts into their mouths words coined the instant before in the mint of your mind, unknown to yourself. The false appear as real, as the true, and you have no exact method of detection since you are yet prone to force your communications to agree with your preconceptions. (Source)

And to think, many Christians are now engaged in magical mystical practices such as contemplative prayer that can give the practitioner misleading revelations and deceptive images, where the false may appear real. (Read a column I wrote on this subject here.)

Keep in mind that the spirits that speak through the mouths of the willing are demons. People who get themselves into a mind-altering trance with the purpose being to channel a benevolent spirit may end up becoming demon possessed! Granted, some channelers are really nothing more than convincing actors who write the script as they go along. These are the charlatans who do it for money or fame – or both. However, there are many dupes that allow their bodies to be used by spirit entities that use the occasion to spew anti-Christian propaganda!

The Bible tells us to, “Prove [test] all things; hold fast that which is good.” (1 John 4:1). We’re also told to flee (run like a maniac) from the devil who “walketh about, seeking whom he may devour.” (1 Peter 5:8) Now, picture a lion hiding in the brush to pounce on an unsuspecting wildebeest. The devil’s like the hungry lion, only he’s waiting to pounce on Christ’s sheep! Unfortunately many Christians fail to obey God’s command to resist the devil, which is one of the reasons Christianity’s in the sorry state it’s in today.

Far too many followers of Jesus Christ are unaware that our Lord quite literallydetests all forms of sorcery. There are no exceptions! Sorry to be a wet blanket, but even astrology is banned. And it doesn’t matter if it’s done “just for fun.” One cannot be a Presbyterian on Sunday and a spiritist the other six days of the week.

This brings me to two blogs I stumbled on. Both male bloggers declare their love for Christ and state that the Bible is the standard by which they live their lives. One studies apologetics; the other is a youth pastor. They both have their Zodiac signs on display. That way if you land on aspiring apologist’s blog, you’ll know that he’s a Gemini; likewise, if you land on youth pastor’s blog, you’ll discover that he’s a Virgo. One can only assume that these young men have not yet read Leviticus 19:26, Deuteronomy 18:9-12, Exodus 22:18 and other similar passages where God commands His people to steer clear of sorcery. And yet these so-called Bible believers find time to read up on astrology?

Christians who are confronted with an evil practice must lace up their trusty running shoes and high tail it out of there, pronto! Keep away from horoscopes (astrology), numerology, séances, tarot cards, tealeaves, palm reading, crystal balls, talking boards, omens or signs. Moreover, do not get involved in wizardry, witchcraft, the study of Kabbalah, nature religion (Wicca), and the practice of yoga (its sole purpose is purely spiritual). Believers must flee from any and all pagan customs and practices. Those who are currently involved in any of the above must bring it to an end today!

Since dabbling in sorcery is a sin against God, repentance is of paramount importance. So if you’ve been dabbling, repent! And never return to any sort of evil practice – even if it’s “just for fun.”

Bear in mind that the demonic powers operating in the realm of the occult are very real. These spirits are stronger and more dangerous than people realize. The Bible warns us to “regard not them that have familiar spirits, neither seek after wizards, to be defiled by them: I am the LORD your God.” (Lev. 19:31).

The Apostle Paul understood all too well that evil forces are ever present in the “heavenlies.” Hence, he admonished followers of Christ to wear the “armor of God” to protect against familiar spirits that prey on gullible humans. He even gave specific instructions to the Church in Ephesus: 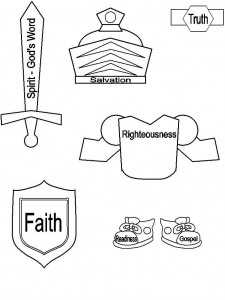 Christian – take Paul’s instructions to heart and daily put on the full armor of God to protect against the rulers of the darkness of this world.

Are You Armed for Battle? By Marsha West

7 Responses to Going against God “just for fun”