Posted By Amy Spreeman on September 14, 2015 in Discernment
Share 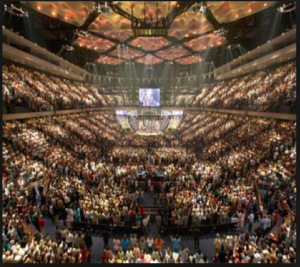 This is a question many of us struggle with as we look at what has happened in the church growth movement over the years: Ginormous, supersized conglomerates with tens of thousands packed into stadium seating to watch a show on a jumbo tron. Multi-site campuses where the only “live” element is the rock band, smoke machine and programs for plugging in and serving the community.

Where are the shepherds who are guarding watch over the sheep? Where are the pastors and elders who take the time to visit the sick and the shut-ins, or to lovingly exhort a member who has backslidden? Do today’s megachurch leaders even know who comes and goes these days? I suppose they do if they look in their info-gathering database. But do they look out among their flock to see who may be missing, or hurting, or lost?

What is the purpose of “church,” anyway?

Pastor Randy White has some great insights in his new series of articles. I’ve interviewed him many times about his departure from the Church Growth Movement.  This one is titled, Churches Are Too Big!

The small church is not appreciated today, and I think that is a sad thing.

A “megachurch” is defined (by an anonymous somebody) as a church that has more than 2,000 in weekly attendance. In the 1980s, a handful of mega churches were born. Today, there are more than 1,600 of these churches across America. In the 2013 Outreach Magazine list of largest churches, the smallest of the top 100 had more than 6,000.

Having been a pastor of both small and large churches, I think I can give a few observations that bring me to my conclusion that churches are too big.

I speak as a Pastor, of course, but I think that knowing your pastor is a great joy. I don’t mean knowing his name, I mean knowing him:  fellowshipping with him, sitting in his study, hearing his joys and feeling his pains.

Through the years, I’ve tried to keep an open office and a published phone number. I found that most people respected the time sensitivities. But I also know that in churches larger than mine, this would be virtually impossible. A pastor is, after all, only one man, with the same 24 hours in a day that others have.  The fact is, the more people under his care, the more challenges he faces to  care for those people. Even when he desires to know “the sheep,” the challenges of doing so are insurmountable in a large congregation. One area in which I personally noticed this was in the area of outreach. For years I made it a point to contact new visitors and invite them to a meal with my family, usually in a local restaurant. I enjoyed these times of fellowship (and gained 40 pounds). After a time, however, I realized that I was creating a false-expectation. Truthfully, once they joined the church, I wouldn’t be able to have dinner with them again because I would have to move on to the next “prospect.” There are only so many meals in a week, after all. In time, I came to dislike the fact that I only had fellowship time for a prospect and not a member. Something was wrong with this picture.

I am committed to the fact that a church has one pastor, and this is the man who stands in the pulpit each week. As a Pastor, I want to know those I preach to. I want to be with these people at the most important times of their lives (birth, marriage, death, and all of life in-between). At these important times, I don’t want to be a professional, called in to perform a ceremony, but I want to be a pastor who has already developed strong relationships with the family so that I can best minister in the crises or celebrate in the joy.

Here’s a truth you should know: the bigger the church, the more the church needs to get bigger. There is a “growth spiral” that becomes a necessity in time. There are two key areas in which growth demands growth.

First, a growing church has growing financial needs, and only growth in numbers can meet the needs. As the church grows, it will build a building. This is almost always done with debt, but even if it is done in cash, the larger building demands more staff, more equipment, and more utilities. The increase in staff, equipment, and utilities becomes a fixed expense. The only way to meet the expense is to increase the size of the congregation.

Second, a growing church has a growing social / psychological pressure to continue to grow. A growing church likes the excitement of seeing how many new members joined this week and how many attendance records were broken. This pressure may not be spoken, but I can promise you that the Pastor is very much under the pressure to do “whatever it takes” to feed this monster.

How do you avoid the growth spiral?  Why not do what churches used to always do: they started other churches. When the Pastor can’t know the people and the building can’t hold the people, a church should at least consider the option of sending a core group to start a new church. This will be healthy for everyone. Start a church, not a “campus,” which only exacerbates the problem.

The “Cool and Rich” Pressure

But have you noticed that most people in our world are neither cool or rich…or even pretty? Most people are average. The mega-church is at war with average. As more and more people attend a church, the cool and rich will rise to the top in leadership and prominence, even if their spiritual substance doesn’t merit such rise.

I think that there needs to be place in a church–even in leadership–for the guy who doesn’t have the social awareness to dress for success, the lady who always has more month than money, and the family whose kids are a bit snot-nosed and sometimes find ways to escape the child-care prison called the preschool area.

In-depth teaching is difficult in large groups. We know this almost inherently, but we deny it at church. Would any of us be happy to discover that our surgeon learned surgery in a class of 500? Would be we thrilled to get notice that our child’s elementary class had just welcomed 15 new students? We would not celebrate in either case, because we know that the most important learning happens in small group or one-on-one settings.

Here is “Randy’s Law of Learning” –As the material increases in complexity, the classroom should decrease in size.

In most large churches, the members are not good at understanding complex doctrinal issues because large-group sermons simply don’t allow it. The members are “generally Biblical” believers who are only equipped to paint with a large brush. The problem is that this is simply ineffective for the real questions of the skeptics around them. Even if those in large churches could attend a small class for these more in-depth issues, they simply don’t.

Do small churches take advantage of the small group for in-depth teaching? Probably not as much as they should. If a small church wants to distinguish itself, this is a prime area of opportunity in which it is uniquely equipped to excel in an area that a large church simply cannot operate.

If you are looking for a church, consider a small church. The fellowship will be great, you’ll know your pastor (and encourage him), you will be able to grow in knowledge and in leadership.  –and your snotty-nosed kid can run the halls without being arrested by the church security forces (and will likely even make his way to the Pastor’s Study, where the Pastor will give him a hug, a piece of candy, and take him back to the nursery!)

Next in this series: Reflection #4: Churches are Too Big

To read all the articles of this series, click here.

2 Responses to Are churches too big?