Conservative evangelicals are often accused by charismatics of having a tendency to box God up.  One charismatic whose mission it is to un-box God is New Apostolic Reformation (NAR) “Super Apostle” Bill Johnson, senior pastor of Bethel Church in Redding, CA. Anthony Wood of Mission Bible Church in Tustin, CA quotes Johnson as saying that “to follow Him we must be willing to follow off the map – to go beyond what we know.” Those who listen to him are encouraged to believe that “God colors outside the lines.” As you’re about to see, Wood vehemently disagrees with Johnson’s portrayal of the Creator of the universe as loosey-goosey.  He also takes issue with Bethel Church’s “special blessings” that include “falling feathers, walking with angels, gold dust, animal growling, raising the dead, and miraculous healings.” Wood writes: 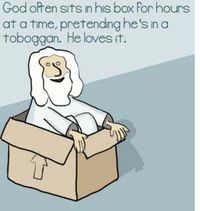 I receive emails from people around the world who are deeply confused and frightened by the teaching and supposed “miracle” ministry of Bill Johnson, Bethel Church, and Jesus Culture in Redding California. Many of these emails are from well meaning friends and family who have a loved one “immersed” in Bethel culture who won’t respond to their basic appeals for biblical clarity. Interestingly, time and again these lost sheep influenced by Bethel provide the same response to inquisitors. “We don’t put God in a box.”

This common tagline from Bethel “Don’t put God in a box” or, “God likes to draw outside the lines” appears often in Bill Johnson’s books. Why do they say it? What does it mean? Is it biblical?

For background, virtually every Scripture Johnson uses in his seminal work [When Heaven Invades Earth, Destiny Image, 2003] is taken out of context [In a former post I’ve documented errors of Bethel which we’ll set aside here]. In the first chapter of WHIE, Johnson presumes: What really happened outside the garden of Eden (Gen. 1:28), Satan is empowered through an invented term “agreement” (Rom. 6:16), Jesus supposedly came to recapture man’s dominion (Lk. 19:10), the Father really wanted Satan defeated by man (no text), the word “evil” actually means “sick and poor” (Matt. 6:13), the key of David is held by believers not Christ (Rev. 3:7), miracle power is what got buried in Christ’s parable of the talents (Matt. 25), all should be seeking a special baptism of the Holy Spirit (something the Gospel authors and Paul connected to conversion),[1] and “all we ask or think” really references signs and wonders. (Eph 3:20)

Space won’t allow we exegetically analyze the entire book, but the point should be clear: Johnson fundamentally manipulates large portions of the Bible toward his own end. However, the most egregious and deceptive example of this is the dichotomy Johnson attempts to create between the Bible and the Holy Spirit, as if they operate with two separate missions. Repeatedly Johnson pits the Holy Spirit against the Bible by writing that Scripture is insufficient to discern the voice of God:

“Jesus did not say, ‘My sheep will know my book.’ It is His voice that we are to know. Why the distinction? Because anyone can know the Bible as a book – the devil himself knows and quotes the Scriptures. But only those whose lives are dependent on the person of the Holy Spirit will consistently recognize His voice. This is not to say that the Bible has little or no importance. Quite the opposite is true. The Bible is the Word of God, and scripture will always confirm His voice. That voice gives impact to what is in print…”[2]

Do not miss what Johnson has just done as this sets the stage for removing the “box” on God: “The voice gives impact…” Manipulatively, Johnson has separated God’s voice from God’s Word. This is done to give authority to personal revelation outside of, and over the written Scriptures; a demonic plot that dates back some 1800 years.[3] Johnson continues, “to follow Him we must be willing to follow off the map – to go beyond what we know.” (pg. 76)… and “signs (the Bible) have a purpose… they are not an end in themselves… they point to a greater reality… the sign is real… but it points to a reality greater than itself… We’ve gone as far as we can with our present understanding of Scripture. It’s time to let signs have their place.” (pg. 129)  Continue reading

Saddleback and its Meulenberg dilemma
“The Gospel according to Glennon”: What gospel?

29 Responses to Hey Bill Johnson and Bethel Church, God Put Himself in a Box Called “Bible”