Posted By Amy Spreeman on September 9, 2016 in Discernment
Share

Little lambs, you are conflicted. You see your nation going by way of darkness, as if every God-hating group with an agenda is in the driver’s seat, driving the nails into the coffin of a nation you hardly recognize anymore.  America is a corpse of its former self.

“If My people who are called by My name will humble themselves, pray, and seek My face, then I will hear from heaven, forgive their sin, and heal their land.”

“That’s it!” you exclaim. If we would just… Then God will…

If we would just…

If we would just repent, then God will heal our land. That is what we are being promised by some of the most prolific pastors in America today. And it sounds so right, doesn’t it? Because God said it to His people. And we are His people, right?

This weekend on September 11 we in the United States mark the anniversary of that day when airplanes, towers, safety and trust came crashing down. And on this day we’re being urged to lay down our doctrinal differences and join in yet another call for Christian unity, to gather in the name of Jesus in our nation’s capitol to pray as one.

The Washington Mall event headlined by Rabbi Jonathan Cahn is called, “If My People.” It hangs its hat on the one word that other unity gatherings have lacked – the one word that seems to lend legitimacy to this movement: Repent.

Yes, we must repent for our sins. And yet…

A question that needs to be asked here is, can we repent on behalf of the ungodly people or groups we blame for ruining this nation? Will God heal our land if we repent on behalf of Planned Parenthood, or Black Lives Matter, or Hillary, or Donald, or…? Or are we commanded to repent of our own sin, pray for the ungodly, and perhaps even (gasp) give them the True Hope we have in Christ. 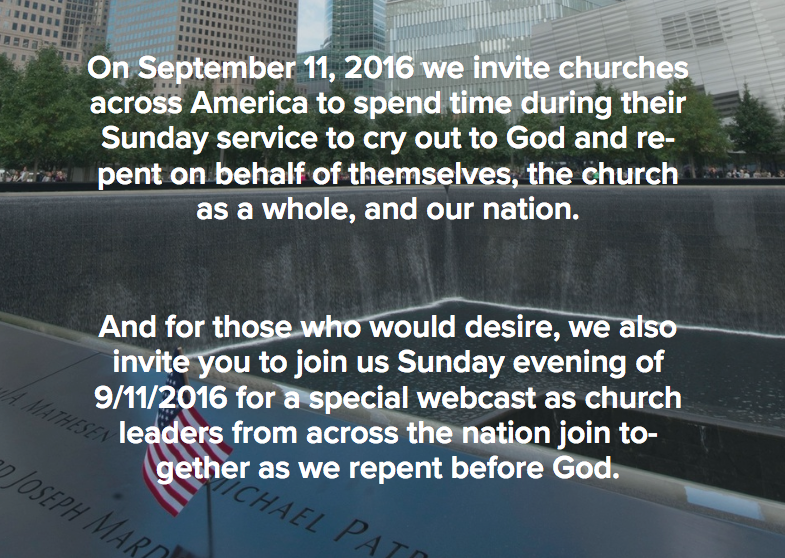 Rather than explaining once again why I’m concerned with the leaders joining theological arms with Jonathan Cahn, or warning of the dangers of dropping our walls of doctrinal truth to gather in “unity,” I’m ending with some links for your consideration. I urge you to do your own research into the legwork that other discerning writers have done for you. Be a Berean, and search the Scriptures to see if these things are so.

Alcoholic Pastor, Perry Noble, Says He Will Return To Ministry
Priscilla Shirer & Women’s Bible “Mis-studies”: When Your Church Doesn’t Care About Your Soul (Or The Scripture)

4 Responses to A Washington D.C. Mall call to unity, again.