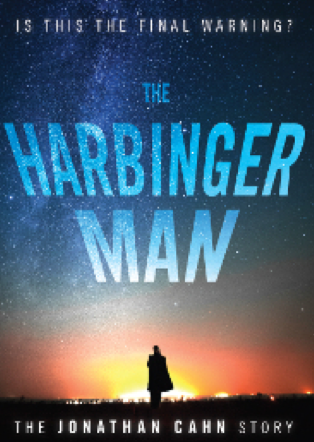 “There are few books that change the course of a nation. Rabbi Jonathan Cahn’s book, The Harbinger, is such a book.” – WND

WND, a ministry that promotes everything from blood moons to mystical soaking prayers, is the go-to news site for millions of Christians. It also heavily promotes author Jonathan Cahn. WND is now peddling a film titled, The Harbinger Man: The Jonathan Cahn Story, released a few months ago.

I’m just going to let the promotional copy speak for itself, with a couple of external research links from recent events:

“There are few books that alter the course of a nation. Rabbi Jonathan Cahn’s The Harbinger is such a book. It burst onto the New York Times best-seller list in early 2012 and stayed there for more than one hundred weeks. Then Cahn did it again with The Mystery of the Shemitah, an instant bestseller in 2015.

Something profound was happening. Was it possible…

All of this came to the forefront for pastors, politicians, and a public growing anxious because of Cahn’s prophetic books.

Hang on a sec. Here’s where I need to insert some links. If you haven’t seen them, please take a look. More at the bottom of this article.

Back to the WND promo copy: 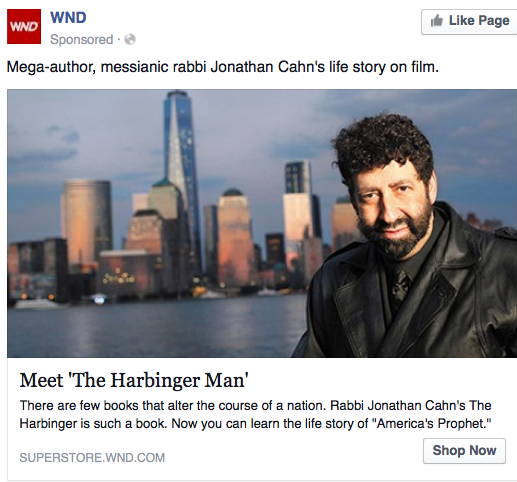 But what of the author himself? What do we really know about him?

What is the life story of Jonathan Cahn, known as “The Harbinger Man” and a Messianic Rabbi? How did Cahn rise from relative obscurity to worldwide prominence and acclaim? Raised a Reform Jew, and hardened as an atheist, why did Cahn beg God to reveal Himself by laying Cahn near death’s door? Was it Cahn’s wake up call to surrender to Christ? But why? For what purposes?

Now, for the first time ever in the biographical documentary, The Harbinger Man: The Jonathan Cahn Story, Rabbi Cahn reveals (in his own words) his journey from being God’s enemy to becoming a close confidante.

“Before God judges a nation, He sends warnings,” Cahn has said. “But America, like Israel, has not responded with repentance, but with defiance.”

While an impending judgment hangs over America, Cahn leaves room for hope. He cites 2 Chronicles 7:14: “If My people who are called by My name will humble themselves, and pray and seek My face, and turn from their wicked ways, then I will hear from heaven, and will forgive their sin and heal their land.”

Will there be judgment or revival? Is this the final warning? Find out in The Harbinger Man: The Jonathan Cahn Story.

Filming the breadth and expanse of the country, from New York to California, Messianic Rabbi Jonathan Cahn takes us on a journey from his boyhood home in New Jersey to pulpits across America, from the bright lights of television studios to Statuary Hall speaking before members of Congress. Rare footage and photos reveal an ordinary man seeking his calling, and stepping out boldly to fulfill God’s great commission.

3 Responses to Meet the “Harbinger Man”?