Posted By Marsha West on February 1, 2016 in Discernment, Entertainment
Share

In his commentary, Glenn E. Chatfield touches on some of War Room’s theological problems and also discusses what he feels are the movie’s positive aspects.  All in all what he has to say is fair and balanced.

In my view, the Kendrick brothers certainly have good intentions in making “Christian” films.  But what I find troubling is that much of their teaching on prayer is decidedly unbiblical.  This presents a problem in that many who see the film lack the discernment to know that what they’re learning about prayer doesn’t line up with Scripture.  This is why the movie’s critics say that those who were involved in it (producers/writers/directors/cast, etc.) have led the sheep down a very rocky path.

Now to Glenn’s excellent commentary on the movie… 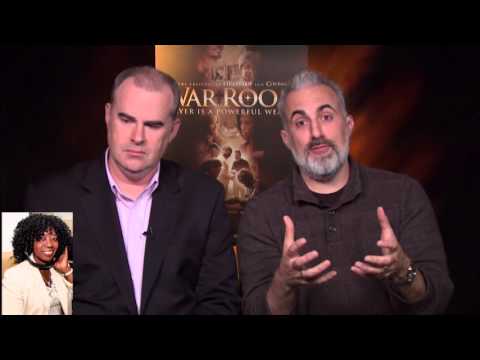 Pictured are producers Alex and Stephen Kendrick. In their movie they use Beth Moore’s schtick of claiming revelations from God!

One of the problems with so many apologetics ministries is the propensity to nit-pick every little detail of someone’s teachings, or lifestyle, or productions.  I have been a wee bit guilty of this myself at times and when I notice it in my older articles I delete them for that cause — or at least clean out the nit-picking part.

There is no such thing as a perfect Bible teacher, be it a pastor or layperson; everyone — and that includes me — has made some type of error sometime in their teachings.  I know I have changed some of my beliefs over the years as I have done more studying of the Word or have received correction/counsel from godly men.  If we nit-pick people for every thing they do or say wrongly, then we will have no one who isn’t guilty!

This is true of movies.  There are no perfect movies; they all have some sort of problem, even if it is just a story line which doesn’t make sense or poor direction.  Some have technical errors, some have historical or social errors, and even some theological errors.  If we criticize movies for minor errors then we may as well not watch any of them!  I understand that we expect higher standards for Christian movies, but these producers are also sinful humans.

Now, I’ve read too many reviews of “War Room” and decided that if I watched the movie I would just be irritated the whole time.  I expected to see lots of Beth Moore, lots of contemplative prayer, lots of aberrant spiritual warfare, etc.  However, my wife decided she wanted to rent the movie so she could be able to discuss it with her Bible study group.  As “luck” would have it, we got called by Family Video a few days ago to tell us we won the drawing to get a new movie rent free and two weeks of 1/2 price movies (we have rented about a dozen movies there in the past 2-3 years), so we decided to get War Room and watched it last night (30 Jan).  It certainly wasn’t what I expected from all the nit-picking criticism I’ve read.

Before I give you my commentary (not a “review) on the movie, let me make a few general statements about the Kendrick Brothers’ movies:

Okay, now for my commentary on the movie itself, starting with my negatives.

Right at the top of my list is their use of Beth Moore as an actress.  Beth Moore is a false teacher (much worse than Priscilla Shirer), and this movie gave her such a personal promotion (albeit in only two cameo scenes) that she is bound to gather more followers.

As with the other Kendrick movies, War Room had a very contrived story to make its point.  I think this movie was more contrived than the others, making it more difficult to accept as a real situation.  That’s just the way I saw it.

I think the idea of going to war with prayer is aberrant, and I believe it comes from the whole aberrant spiritual warfare ideology.  Nowhere in the Bible does it say we are warring with our prayers.  I would really like to know where the term “prayer warriors” began — it never is found in Scripture!

The “prayer closet” teaching is really an abuse of Matthew 6:6.  Jesus was not saying we needed a private room; what he was teaching was that we are not to be out “on the street corners” so as to be seen as holy and righteous and “show-offy.”  Our private “inner room” could be in the middle of the house all alone, or it could be in an open field, or even in a bedroom while everyone else in the house is elsewhere.  The movie made the necessity of a private “prayer closet” (“war room”) virtually indispensable.

Toward the end of the movie, when a couple was looking at Clara’s house, the pastor could feel that Clara’s closet was a “prayer closet” — he said that the prayers were “baked in.”  This is superstitious nonsense; no one is able to discern where people were praying just by “feeling” something.  Continue reading

DOWNLOAD OUR RESEARCH PAPER ON THE NEW APOSTOLIC REFORMATION