Millions of young people around the world are being told that they can soon supernaturally receive the hovering mantle of evangelism from the late Billy Graham, and that this opportunity will be theirs on February 23. Please hear me, Christian, there is no “mantle” from any person dead or alive that we are to activate or receive. 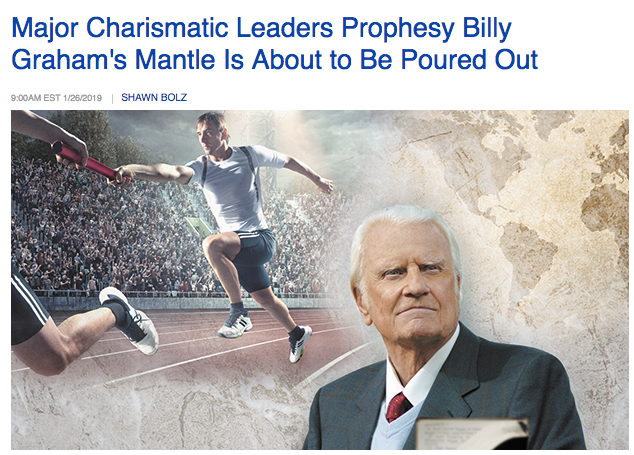 Who is making these promises? Lou Engle, along with leaders in the YWAM organization, according to Charisma News, in an article I will dissect here. The article, titled Major Charismatic Leaders Prophesy Billy Graham’s Mantle Is About to Be Poured Out was written by Shawn Bolz, whom I’ve warned about. Bolz is known widely as a “prophet” who can predict the future in a “thus sayeth the Lord” kind of way, like when Bolz took the stage at the heretical Azusa Now “revival” to do prophetic cold readings (parlor tricks) using his smart phone.

(Note: I wouldn’t intentionally send readers to what I know is a dangerous site as Charisma News is rife with false teaching from the New Apostolic Reformation and Word of Faith teachers. I’ve included a source link at the bottom of this article for those wishing to read the original.)

In December and again just a few days ago, the following was reported about a new movement called The Send. The following paragraphs contain much of the vernacular you would hear in NAR churches:

Lou Engle and key charismatic leaders believe that in 2019, God will ignite a movement in the next generation as never before. Specifically, these leaders believe Billy Graham’s mantle of evangelism will be poured out on the next generation—and they have called for a gathering to usher it in. This event, called The Send, will take place Feb. 23 at Camping World Stadium in Orlando, Florida.

Everyone involved says this isn’t just a stadium event; it’s a movement. In fact, Engle is so confident about this that he has ended his longtime ministry, The Call, to pursue The Send.

“We believe that [Graham’s] mantle is hovering, waiting for thousands to lay hold of it,” Engle says. “It is a mantle that is a burden for evangelism—for a new era of Jesus the Evangelist—to manifest a new Jesus People movement harvest to take place. I believe The Send will be a flashpoint for the fulfillment of that word. I so believe in this shift that I have ended The Call.”

Lou Engle has hosted his The Call stadium gatherings for almost 20 years, but in the past several years those events have gotten international attention.  This year, Engle is telling the next generation of young Christians that he is  mobilizing missions ministries, evangelism groups and churches across North America and even other continents, asking them to throw their weight behind one central theme: It’s time to carry out the Great Commission and show the world Jesus the Evangelist.

I’m not sure who Jesus the Evangelist is, but we know that Jesus the Lord didn’t give Himself such a title. Instead He has commissioned all of us to share the Gospel. That doesn’t seem to be what this movement is about, however.

Enter in the leaders of YWAM (Youth With A Mission), who heard an extrabiblical word for Engle, telling him to start a new movement:

Seven years ago, Engle says, YWAM leaders, led by Andy Byrd and Brian Brennt, came into his living room and prophesied a shift to The Call. They shared prophetically how The Call was going to become a new movement: The Send.

Why The Send? Byrd and Brennt prophesied that Billy Graham’s mantle or ability to reach people would be released on many individuals and ministries, and that people would begin to adopt their neighborhoods, schools and cities with the same faith Graham had for winning souls. They also prophesied that stadiums would be filled by these believers with signs and wonders.

These conversations took place well before Graham’s death in February 2018. These leaders had simply received revelation that just as Elisha received Elijah’s mantle, so there was a generation that would receive Graham’s mantle of evangelism.

…Engle was on a trip, seeking God, when he read 2 Kings 2, in which Elisha actually receives the mantle of Elijah. Elisha basically says, “I will not leave you, Elijah, until I get your spirit upon me.”

As Engle read those words, the Holy Spirit gripped him, and he wrote in big letters in his Bible, “BILLY GRAHAM I WILL NOT LEAVE YOU UNTIL I GET A DOUBLE PORTION OF YOUR SPIRIT ON THE NEXT GENERATION!”

He felt as though God was bringing him into a divine prophetic moment and that Graham was about ready to pass. He sensed that the body of Christ was heading to a Jordan crossing, and it would release a double-portion Elisha movement of signs and wonders as sons and daughters would rise up and carry the mantle of Billy Graham.

“It was like a command shot right into my spirit, with the Lord saying, ‘Bring me a new bowl!'” Engle says. “God went on to say: ‘Whereas before you have seen stadiums filled with fasting and prayer, you are going to see bowls filled with the manifestation of the scroll of Jesus: “The Spirit of the Lord is upon me because the Lord has anointed me to bring good news to the afflicted.'” Just a few days later, on Feb. 21, Billy Graham went home to glory—and I knew it was ‘Game on!'”

Next, Engle met with Andy Byrd of YWAM, Daniel Kolenda of Christ for All Nations, Teofilo Hayashi of Dunamis Brazil, Michael Koulianos of Jesus Image, Todd White of Lifestyle Christianity and Brian Brennt of Circuit Riders. Many more partners have joined, including TBN, Bethel Church in Redding, One Voice, Every Home for Christ and Burn 24-7.

The result: The new movement called The Send. Here is the website, promising every attendee will be “activated.”

Here is the speaker lineup: 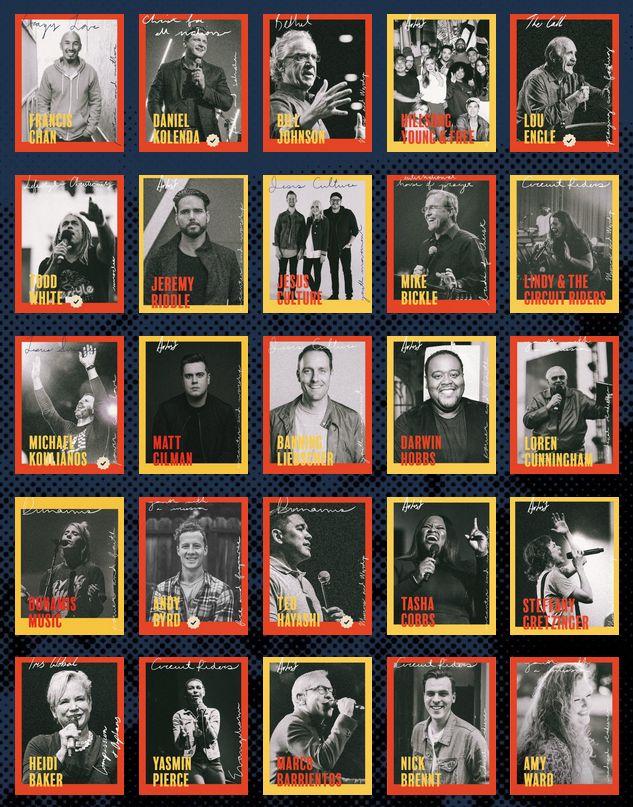 “A great awakening is at hand, and this is the hour of the double portion, sons and daughters. On Feb. 23, I believe fathers of my generation will pass the anointing to the next. My statement is, ‘Billy Graham, I will not let you go until I see a double portion of your anointing on the next generation!'”

“Our goal isn’t just for an event or gathering but for an activation to occur,” Byrd says. “The gathering itself is going to be a place where we commit together practically to reach our region, city and schools; and we commit to God together to target people groups in a really practical way to take responsibility for evangelism as we adopt them in our hearts and prayers. The goal is that those commitments will be walked out in the days that follow, and we are creating a strategic plan and online platform for this to happen. We are creating on-ramps of online training and support so that people won’t just come to an event but create a movement.”

Source for the above citations: https://www.charismanews.com/us/74929-send-me

See more about YWAM’s connection to the NAR here.

Holding on.
An Open Letter to Beth Moore