What’s in a name? When the name and title of “General” is used in a church leadership context, it’s a rank that ought to be a red flag for you.  After reading this article, I hope it will be in the future.

First, the photo. Hillsong’s Brian Houston posted this on his Facebook profile: 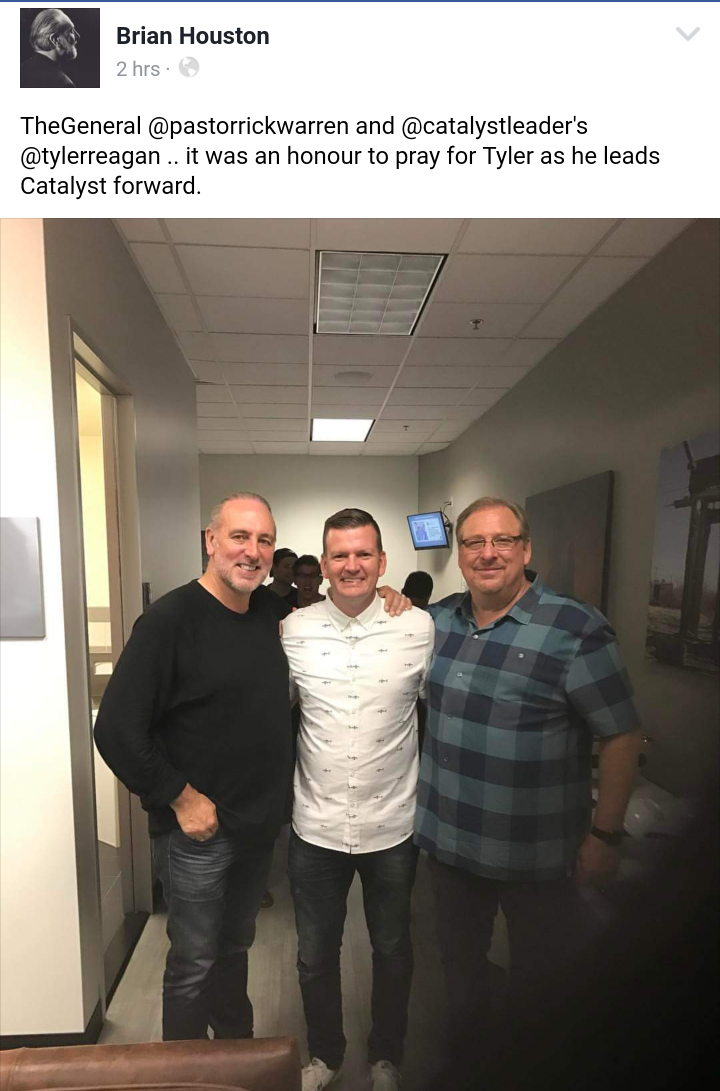 The rank title in this case may be easily dismissed as nothing more than just a friendly term of endearment. But did you know that “General” is code word for Apostle within the New Apostolic Reformation movement?

That’s why Apostles are also called “Generals,” a code word for Apostle.

Leaders in this modern-day apostles and prophets movement know full well that discerning churches today would never consider recommending or inviting theology from a modern-day Apostle or Prophet. So they’ve distanced themselves from those titles for more innocuous ones, in order to penetrate the mainstream and fly under the radar.

That’s how slippery the NAR is to pin down. And that’s how this movement creeps into just about every denomination and non-denom today.

If you want to know if your church is part of the NAR, the main hallmark is that it embraces the idea that God is re-establishing the office of Apostle and Prophet, with the same authority as the original apostles that Christ Himself appointed.

So for instance, on the Bethel Church website, they openly state that they do embrace the biblical office of apostle and prophet, so that tells us they are indeed NAR.

To his own congregation, Bill Johnson is a “Prophet.” But outside of Bethel, he says he feels more comfortable with the word General. Mike Bickle is also called a General, as is Brian Houston.

But NAR leaders will often outright deny ties to the NAR. Because it is being exposed. NAR researcher Holly Pivec observes:

Johnson claimed that Bethel Church doesn’t have any official ties to the NAR. But Johnson didn’t tell the whole story. What he didn’t mention is that it’s impossible for any church to have official ties to the NAR because the NAR isn’t an organization or a denomination. So there’s no official listing of NAR churches. It’s a large movement in which participants are unified by a shared set of beliefs (beliefs in present-day apostles and prophets who govern the church). And you can’t have official, organizational ties to a set of beliefs. However, many of those in the NAR, including Johnson, have developed intentional networks with one another. source

The modern-day apostleship anointing is physically passed from one “apostle” to another, usually through the laying of hands. Marching orders then flow from God to these leaders, whose anointed authority must not be questioned. Through these generals, an army of end-times soldiers will be raised up to take dominion of the earth and the spiritual realm, so that Jesus is able to return to a perfected Kingdom. I’m not kidding.

Back to the photo. Again, I do not doubt that Houston’s bestowal of the General title on Rick Warren will be dismissed as simply another “heresy-hunter’s-guilt-by-association” thing. We’ve heard it all before. And the NAR will advance its dominionist agenda while Christians deny the obvious signs.

But do consider that Rick Warren’s dominionist agenda through his P.E.A.C.E. Plan continues to pick up steam in nations around the world, even though many in the West have forgotten all about it.

“Hope Renewed” in what, exactly?
The aim of Adventures in Missions and the World Race

15 Responses to Why calling Rick Warren a “General” is significant