John Lanagan of My Word Like Fire  continues to expose the false teaching of the NAR “apostles” and “prophets.” 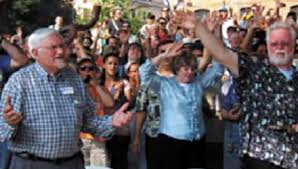 While still assessing the damage done through Empowered21’s Jerusalem gathering, where many were exposed to New Apostolic Reformation leaders and teachings, it seems appropriate to share these words from Cindy Jacobs about her own alleged prophetic gift, as well as her prophecies (?) to C. Peter Wagner, the founder and Grand Poohbah of the New Apostolic Reformation:

“I first prophesied when I was four years old.” –Cindy Jacobs, from The Turn Around Season, spoken at the Empowered21 Jerusalem gathering

So Jacobs had an understanding of the Salvation message at three or four years old? Since she claims her prophetic words are from the Lord, she had to have been a saved toddler to receive this gift, right?

According to NAR founder C. Peter Wagner, Cindy Jacobs was first to prophesy about the “anointing of apostle of prayer” the Lord supposedly placed on Wagner:

“As far as I can find back in the prophetic journal the first prophecy I ever had that used the word apostle came from Cindy Jacobs.” In July in 1995, at a meeting in Colorado springs, at a voice of God conference “Cindy said “The lord would say today my son Peter I put the anointing of apostle of prayer upon you, I put the mantle of an Abraham, a patriarch, and I’m calling you forth into the land of promise.” — C.P. Wagner May 11, 2000 National School of the Prophets (bold mine) (This section excerpted from Let Us Reasonhttp://www.letusreason.org/latrain21.htm)

Jacobs wasn’t done with speaking false prophecies over C. Peter Wagner. She also claimed his work with the Second Apostolic Age would be on par with what Martin Luther accomplished! Jacobs stated:

“Mike and I were sitting at a restaurant with Peter Wagner, and the Lord gave me a word for him, that God was going to use him to do something that would change the face of Christianity. And he said, “Well, I’ll probably never tell anybody that.” Oh, yeah, right, Then, well, right. That’s the second part. I was gonna say that. In fact, the Lord, the Lord, and the word of the Lord said, “It will be, it will be like unto what Martin Luther did.” — Cindy Jacobs National School of the Prophets, subtitled “Mobilizing the Prophetic Office May 11th, 2000 (bold mine)**

Will Empowered21, headed by Billy Wilson of ORU and Assemblies of God leader George Wood, continue to expose people to such false prophets and apostles?

**Again, thanks to Let Us Reason for the last two quotes as well as for the excerpt from the excellent article, The New Apostolic Church Movement which you can read in entirety here:http://www.letusreason.org/latrain21.htm

DOWNLOAD OUR WHITE PAPER ON THE NEW APOSTOLIC REFORMATION