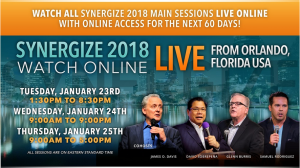 There is a major effort by the “Billion Souls Network”  to “Bring Back The King” by finishing the Great Commission by the year 2100. The Billion Soul Network Coalition comprises more than 1,300 denominations and organizations, along with more than 400,000 local churches, committed to synergizing their efforts together to accelerate the doubling of the “Global Church”.

This Dominionist movement is not only not biblical, it is downright dangerous. (see our White paper on New Apostolic Reformation/Dominionism to begin your research.) Here is a piece I wrote in 2015 on the Billion Souls Network to help you understand how vile this movement is. (By the way, if you’re still watching The 700 Club on CBN, please stop!)

Fast forward to today, as CBN filed this report in Toronto:

Christian ministries have been called streams of God. A number of them are coming together because they believe their unity could help set off history’s greatest revival.

It’s a gathering of some of the most powerful streams of ministry that have been used in revival across the past three decades – much like the Toronto Blessing that started in 1994 and touched millions around the world.

Lighting a Fire & Forming a River

Now these streams have gathered where that revival began because all believe God wants to light the fire again and hit the world with possibly the greatest awakening and harvest of all time.

Daniel Kolenda is the successor of Reinhard Bonnke, whose Christ for all Nations ministry says it has seen more than 72 million salvations. Kolenda insists it’s because they focus on the Lord Jesus Christ Himself.

“It actually makes our jobs quite easy,” Kolenda told CBN News. “We just present Jesus to people and the Holy Spirit comes in and does the rest.”

Lou Engle, co-founder of The Call mass gatherings, has been leading intercessors crying out for this for more than 30 years.

“‘Behold the Lamb of God that takes away the sins of the world,” Engle said, quoting John the Baptist. “I’m believing for a mass Beholding of the Lamb of God. So many people getting saved. And, secondly, that He shall baptize them with the Holy Spirit and Fire.”

John Kilpatrick’s Florida church was the headquarters for the Brownsville Revival that began in 1995. He told CBN News he was assured by God Himself this much larger revival is coming the day al Qaeda brought down the Twin Towers in New York City.

“I watched the towers come down,” Kilpatrick recalled. “And I said to the Lord, ‘Lord, does this mean that revival is over?’ And the Lord responded to me immediately. He said, ‘Oh no. Revival’s not over. I’m going to pour out my Spirit again. But it’ll be in conjunction with end-time events.”

Rick Joyner of MorningStar Ministries believes it’s crucial that all of these various streams of ministry find ways to work in unison.

“Because there’s a multiplication of authority and spiritual authority when you come together,” he explained. “One can put a thousand to flight, but two can put 10,000 to flight.”

Unity Is a Witness

Joyner believes that kind of unity among Christians is the best kind of witness to a fragmenting world.

“They’re starting to love each other, come together, have unity, have peace, have joy — all of these things that the world is becoming increasingly devoid of,” he said.

American pastor Randy Clark had come to visit and guest-preach at this Canadian church when the Toronto Blessing burst out in 1994. The surprised preacher had a front-row seat for one of the most powerful revivals of the 20th century. Now he’s expecting something much greater in the 21st century.

“I do believe in a billion-soul harvest that has been prophesied about,” the Global Awakening founder said.

Clark points out some have prophesied this will be a faceless, nameless revival because God wants to use every willing disciple in the entire Church, not just evangelical superstars.

“It didn’t mean that there weren’t leaders, but that the leaders understood their role was to release the others, the laity,” Clark explained.

From the stage, Engle called the crowd in Toronto to become those disciples rising up from the church pews. He asked them to take off their shoes and shout, “Lord, send me.”

“How beautiful are the feet of those who bring Good News,” he declared, saying of the unsaved, “How shall they hear unless there’s a preacher?”

Kolenda explained what God’s after when it comes to harvesters of souls.

“He’s just looking for people who are hungry and open and who will say, ‘God, whatever You want to do, here am I,” he said.

And that’s what these leaders from past revivals, plus more than 3,000 Christians who’ve come to the Light the Fire Again Conference, are all declaring: “God, whatever You want to do, here am I.”