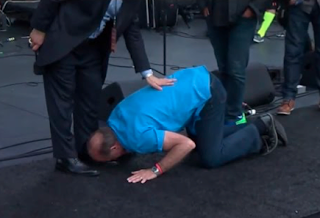 According to NAR  “prophet” Lou Engle, God has revealed that Billy Graham’s mantle “will soon pass, not to just an individual, but to an entire nation.”  Holly Pivec of Spirit of Error fills us in on a prophecy God supposedly revealed to Engle. Pivec writes:

Lou Engle, founder of The Call and a leader in the New Apostolic Reformation (NAR), has been making an audacious claim to audiences in large stadiums and churches across America: that the “mantle” of the aged Billy Graham is about to fall on him and his followers. In other words, Billy Graham isn’t dead yet and Engle has billed himself as the Holy Spirit’s chosen successor to Graham. Of course, Engle doesn’t word his claim quite that directly; you have to read between the lines. Let me explain.

For those who don’t know, a “mantle,” in the NAR, refers to a special empowerment given by the Holy Spirit to a specific individual for a certain purpose. When that individual dies, the mantle can be given to another person. Think of the transfer of empowerment and leadership between the Old Testament prophets Elijah and Elisha, or between Moses and Joshua.

Billy Graham is seen, by those in the NAR, as having been given a mantle for the effective proclamation of the gospel in large stadiums. But Engle claims God has revealed to him that Graham’s mantle will soon pass, not to just an individual, but to an entire nation. And it won’t be limited to proclamation of the gospel with words; it will be a souped-up mantle for the proclamation of the gospel accompanied by miraculous signs and wonders. The ultimate result of this baton pass will be a spiritual “awakening” and the turning back of America to God.  Of course, Engle, who happens to host stadium-sized prayer-and-fasting events through his organization The Call, will receive a pivotal portion of this mantle.  Continue reading