Posted By Marsha West on December 12, 2016 in Church Discipline
Share 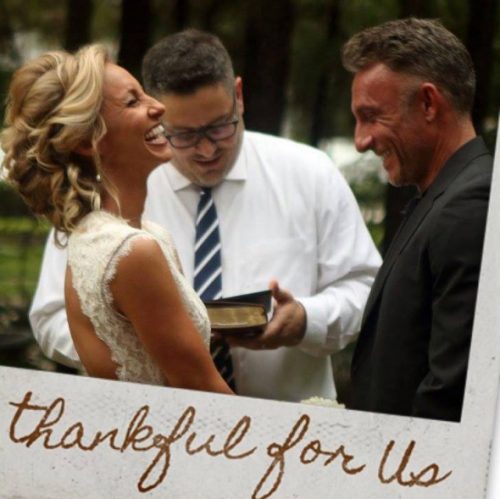 Tullian and Stacie during their nuptials in August 2016. Photo credit: Facebook, posted by Stacie

The Board of Directors of Godly Response to Abuse in Church Environments (GRACE) released a statement addressing the Tullian Tchividjian sexual misconduct scandal. According to their Facebook page: The Mission of GRACE is to empower the Christian community through to recognize, confront, and respond to the sin of child sexual abuse.

We’re including GRACE’s statement as well as a list of its board members that includes Tullian’s brother, Boz, his uncle, Emmanuel and Michael Reagan, son of President Ronald Reagan:

Statement from the GRACE Board of Directors
The GRACE board is deeply disturbed about the revelations of sexual misconduct by Tullian Tchividjian. As an organization that deals with the abuse of God’s lambs and the damage silence causes we feel compelled to speak. We believe that no material institution is more sacred to God than His lambs – be it church or mission or family. Institutions ordained by God were destroyed at His hand when they became corrupt. Given that we must be what He calls His people to be or we too will have chosen silence and darkness over truth and light.

Dear victims – and you are indeed victims. You have suffered and we do not want to add our silence to that suffering. Once again, one of God’s shepherds used his position of authority, his gift of words, his intellect and personality to draw you in when you were vulnerable and in need of care. All power belongs to Christ. Any power we have is derivative and sacred and to be used only for His glory and the good of His people. Anything less is an abuse of that power. You have been victims of the gross misuse of power God intended for your good. We grieve with you. We stand with you in the light. You have with courage exposed the deeds of darkness. Thank you, for we as the Body of Christ need your voices but now that the light shines a failure to respond on our part means we have turned from the light you turned on. We pray for you, knowing full well that each and every one of you has a hard road ahead as you seek newness of life, healing and a restoring of your souls. We pray that the failure of a shepherd will not lead you to forsake the Good and Great Shepherd who turns tables over and cracks whips when those in His church rob His sheep and distort the truth of who God is. We also pray that God will multiply the fruit of your hard labor to step into light to cause the greater body to examine itself regarding the many silenced victims that live in its midst.

Dear church of Jesus Christ, our God feeds and folds His sheep. He speaks truth and does not deceive. He protects us from wolves both inside and outside the fold. He does so by laying His own down at the gate. We fear that we have often helped wolves deceive others and hide themselves in sheep’s clothing for our own gain and comfort. In doing so we have not loved those who prey on God’s sheep for we have left them in their darkness and bondage. There are many untended, discarded victims in our midst. We are called by God to stand in the light they have brought, tend their wounds, lift the fallen and tenderly carry those who cannot stand. We are nothing like our Lord if we fail to do so. May the fruit of this grievous sin bring a sweeping of God’s refining fire through the lives of His people across the globe. At a minimum, God’s “refining fire” requires the Christian community to put in place long overdue reforms that will limit the possibility of continuing transgressions against the vulnerable.

These reforms include:
1. Seminary education of pastors about maintaining appropriate boundaries. Every seminary must provide education on maintaining appropriate boundaries between a pastor and the children or adults he or she may counsel. This training should include instruction on understanding the impact of trauma1 and when and how to refer survivors of abuse to professional mental health providers. If a church is hiring or has hired a pastor who has not received this sort of training, it can and should be conducted after the fact.  Continue reading

GRACE Board of Directors: