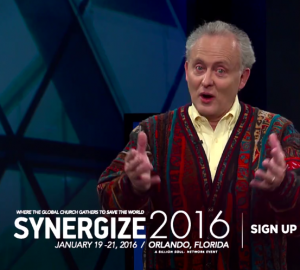 There is a major effort by the “Billion Souls Network”  to “Bring Back The King” by finishing the Great Commission by AD 2100. This Dominionist movement is not only not biblical, it is downright dangerous. (see our White paper on NAR Dominionism to begin your research.) What is the Billion Souls Network?

When I first heard of that organization about three years ago the red flags went off for me and I started doing some digging around.  Back in 2012, Buddhist Ken Blanchard (a favorite of evangelical leadership trainers), teamed up with Tony Blair, Bill Hybels, Henry Cloud, Patrick Lencioni, Craig Groschel, Erwin McManus, and many other Emergent Church founders.

In 2016, that movement will gather a few more speakers in its effort to synergize the global church to save the world. (Who is it that saves the world? The global visible church?) This gathering is called, Synergize 2016: Where the Global Church Gathers to Save the World. True to the Dominionist movement, the conference promises plenty of experiential supernatural moments and an imparting of empowerment in harmonizing, healing and harvesting souls.  Speakers  for the January event include names you never heard of, and one you should know: NAR teacher John Bevere and Leonard Sweet, one of the forefathers of the Emergent Church. (What’s Ravi Zacharias doing there?)

Do your research on the New Apostolic Reformation to learn more about why this movement is one of the most dangerous, fastest-growing cancer in the visible Church today.

Christian Gun Owners Are Heretics
Birds of a feather? David Jeremiah plans to team up with Osteen and Meyer