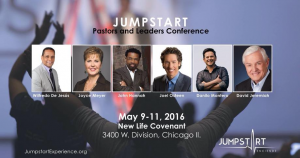 Join us as we share the journey of what God has done through our Dream Center, dynamic outreach, and community engagement. You’ll leave inspired and purposeful to make a bigger difference in your community. Be sure to bring your leaders and associates with you to this purpose-driven event.

UPDATE:  In April, one month before the conference, it was reported that Jeremiah was no longer going to be speaking due to “scheduling conflicts”: 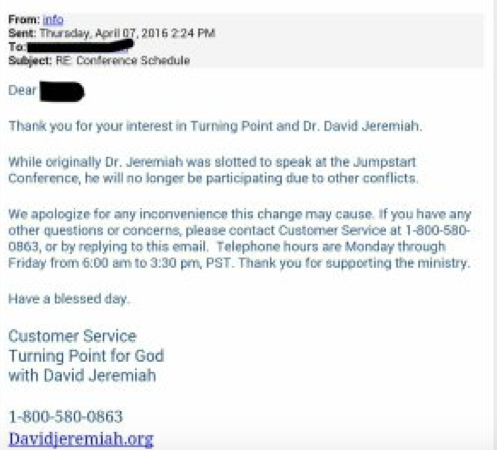 As for even considering speaking at the Jump Start conference in Chicago this past May, why anyone would want to hitch his pony to the heretic express?

If appearing at a conference with known and exposed heretics was the only concern, this probably wouldn’t garner much more than a raised eyebrow at Jeremiah’s incredible lack of discernment.

It’s a serious pattern of confusing the sheep.

Do not be unequally yoked with unbelievers. For what partnership has righteousness with lawlessness? Or what fellowship has light with darkness? 15 What accord has Christ with Belial? Or what portion does a believer share with an unbeliever? 16 What agreement has the temple of God with idols? For we are the temple of the living God; as God said,

“I will make my dwelling among them and walk among them,
and I will be their God,
and they shall be my people.
17 Therefore go out from their midst,
and be separate from them, says the Lord,
and touch no unclean thing;
then I will welcome you,
18 and I will be a father to you,
and you shall be sons and daughters to me,
says the Lord Almighty.”
2 Corinthians 6:14-18

Additionally, it is dangerous to fellowship with false teachers because they can corrupt even sound theology.

Do not be deceived: “Bad company ruins good morals.”
1 Corinthians 15:33

The Billion Souls network wants churches to Bring Back The King
Benham Brothers on Oregon Shooting: Satan and Demons Manifesting Themselves in Our Nation

37 Responses to Birds of a feather? David Jeremiah plans to team up with Osteen and Meyer