But a better question would be: what do high-profile Baptist pastors David Jeremiah and Robert Jeffress have in common with prosperity preachers?  Seeing two pastors who are admired by many Christians praying with the likes of Paula White, Ken Copeland and Jan Crouch, the wife of the late Paul Crouch and co-founder of what some refer to as the Trinity Blasphemy Network, was disappointing to say the least. Many in the Christian community are eager to hear why they agreed to attend such a gathering.

CNN has the full report, including some of the prayers uttered by Word of Faith heretics for real estate mogul and reality TV-star Donald Trump, prayers that are unbiblical and troubling. 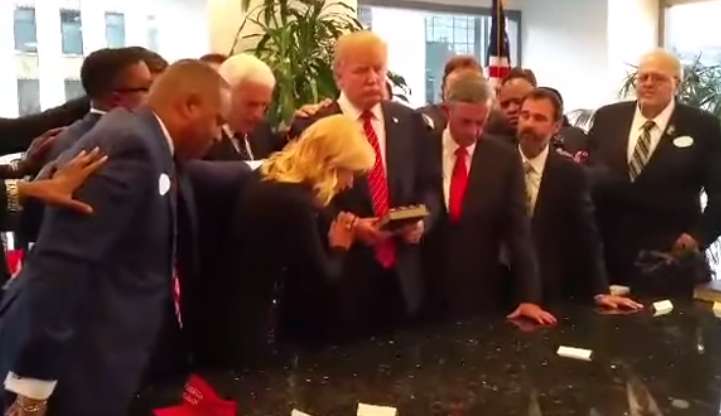 A video has surfaced online showing the men and women, along with others, laying hands on Republican presidential candidate Donald Trump this week and praying for his potential presidency.

According to reports, an estimated three dozen spiritual leaders from across America met with Trump for over two hours at his Trump Towers on Monday, providing advice. Those in attendance included a number of nationally-recognized televangelists and prosperity preachers, including the aforementioned Copeland, Crouch and White, as well as TBN regulars Jentezen Franklin, Steve Munsey and Clarence McClendon.

The meeting concluded as many of those gathered laid hands on Trump and prayed for God’s wisdom and favor on the candidate—the last few moments of which was captured on camera. He was flanked by White on one side and Jeffress on the other.

“Father, we just secure him right now by the blood of Jesus. We thank you that no weapon formed against him will be able to prosper and any tongue that rises against him will be condemned according to the word of God,” White, who leads New Destiny Christian Center in Florida, prayed as she touched his arm. “Even as we lay hands on him right now, let Your hand be laid upon him. Let him have a greater encounter with You, a greater encounter with the spirit of God.”

Kenneth Copeland, who leads Kenneth Copeland Ministries in Texas and has come under criticism for his health and wealth teaching, asked for wisdom for the candidate.

“[W]e ask you today to give this man your wisdom, boldly. Make sure and certain that he hears You. Manifest Yourself to him,” he prayed. “And we thank You and praise You for a bold man, a strong man and an obedient man.”  Continue reading...watch the video below