I am a huge proponent of screencap. Capturing an image before a false teacher or wolf or talk show host or author realizes he’s been caught peddling falsehoods is often the only way sheep will realize just how deceitful their beloved Christian celebrities really are.  So when I saw that someone had captured yet another horrific, blasphemous lie on social media this morning, I just about fainted:  “Jesus bled and died for us so that we can lay claim to the promise of financial prosperity.” 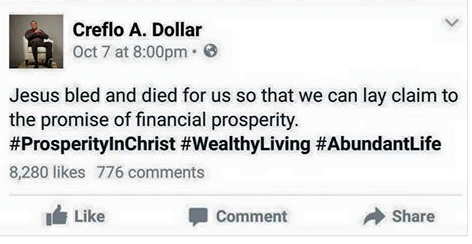 Screencap is good, but being a Berean is better. I had to check this out for myself. I could not find Creflo Dollar’s statement on his Facebook or Twitter profiles. But I did find an article by Andy Walton on Christian Today, confirming that Team Creflo indeed removed the post after hundreds of Bereans criticized him for his statement:

Pastor and popular preacher Creflo Dollar has carried out an apparent u-turn over a post which endorsed the prosperity gospel on his official Facebook page. The post was on the site for around 24 hours before seemingly being removed.

While Dollar has been accused of promoting the prosperity gospel many times before, this was the most obvious and blatant statement of those beliefs. Soon, he was being heavily criticised in the comments under the update as well as roundly mocked for the statement, which is so clearly at odds with orthodox Christian teaching.

The statement was then removed from the Facebook page without comment from Dollar or his team. While there seems to be no trace of the original post remaining on his Facebook page, screengrabs were taken of it which are readily available online.   Story here.

When a wolf shows his true colors and his fur peeks out from the white wool he has been pulling over the eyes of sheep around the world, it is not mean to point it out and warn the flock.  Do not be deceived.  Please research this movement called Word of Faith, and read our white paper on it.

Nothing will create more euphoria in the average person than the promise to make them wealthy, and this the Word-Faith leadership knows very well. The Word-Faith teacher’s lifestyle is clearly identified by opulence, luxury, riches, and the assurance that all of this can be his followers as well — if only they apply certain principles.

Prophecy: “For men (and women) will be lovers of self…”
Dancing on Money [VIDEO]: Creflo Dollar’s Cash Foundation