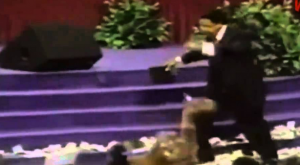 If you’ve never seen this video of prosperity preachers Creflo Dollar and LeRoy Thompson dancing across their stage on the dollar bills of congregants, you’d best gird your loins first with truth:

For the wrath of God is revealed from heaven against all ungodliness and unrighteousness of men, who by their unrighteousness suppress the truth. For what can be known about God is plain to them, because God has shown it to them. For his invisible attributes, namely, his eternal power and divine nature, have been clearly perceived, ever since the creation of the world, in the things that have been made. So they are without excuse. For although they knew God, they did not honor him as God or give thanks to him, but they became futile in their thinking, and their foolish hearts were darkened. Claiming to be wise, they became fools..  Romans 1:18-24

Creflo, who recently removed his post stating that Jesus’s blood was shed so we could be wealthy, has always been a wolf. His love of money knows no satisfaction, even guilting his followers into funding a $65 Million private jet.  Thompson boasts about his $16,000 dog and his $3.6 Million home.

Hat tip to Jeremy Siefert for finding this video for me:

What are your thoughts?