Posted By Amy Spreeman on December 21, 2016 in Catholic
Share 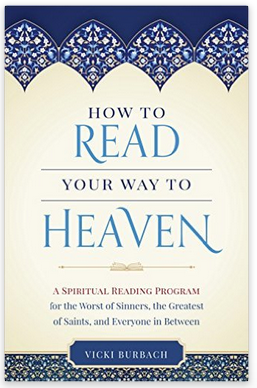 Advertising claims can be quite sensational, but I’ve never heard one quite like this. I came across this ad for a brand new book that promises instant access to heaven IF you’ll only read the book, titled, How to Read Your Way to Heaven – A Spiritual Reading Program for the Worst of Sinners, the Greatest of Saints, and Everyone in Between,

That’s quite a claim, considering Jesus says He is the only way to Heaven.

For it is by grace you have been saved through faith, and this not from yourselves; it is the gift of God, not by works, so that no one can boast. (Ephesians 2:8-9).

The book was written by a Catholic author Vicki Burbach, who leads the book club at SpiritualDirection.com (a Roman Catholic resource site for mystical practices.) In promoting the book, the site’s editor writes:

What if I told you, you could chart a course to heaven simply by reading? The fact is that many of the saints regularly read the spiritual classics. And, what they read affected their spirituality, their Catholicity, and their lives in a positive way.

So reading the book helps you get to heaven. But if you can’t read, or if you don’t buy the book, I guess you are out of luck and will have to find a different path. After all, this book is to be taken literally as a how-to manual:

“She knows that getting to heaven is not as simple, and as easy, as curling up with a Good Book and the beverage of one’s choice. But, she also understands how critical spiritual reading is to our faith-life and our development as Catholics, and ultimately our journey to heaven.”

Says Dan Burke, President of the Avila Foundation, Founder of the Avila Institute, “Getting to heaven often requires that we rely on the wisdom of those who have gone before us. Vicki Burbach has done us a great service by providing an insightful reading plan and approach that, if absorbed and followed, will no doubt produce saints!”

But the Bible says something quite different about getting to heaven. Salvation is by faith alone. No works, and no righteous acts will get us there. The only righteousness we can lay claim to is Christ’s righteousness, imputed to us.

Jesus said to him, “I am the way, and the truth, and the life. No one comes to the Father except through me. John 14:6

Jesus answered him, “Truly, truly, I say to you, unless one is born again he cannot see the kingdom of God.” John 3:3

Then they said to him, “What must we do, to be doing the works of God?” Jesus answered them, “This is the work of God, that you believe in him whom he has sent.” John 6:28-29

He saved us, not because of works done by us in righteousness, but according to his own mercy, by the washing of regeneration and renewal of the Holy Spirit, whom he poured out on us richly through Jesus Christ our Savior. Titus 3:5-6

Because, if you confess with your mouth that Jesus is Lord and believe in your heart that God raised him from the dead, you will be saved. For with the heart one believes and is justified, and with the mouth one confesses and is saved. Romans 10:9-10

Are You Trembling Yet?
Christmas: Christ In You

23 Responses to How to Read Your Way to Heaven?