What in the world is going on with Greg Laurie? For this article you will need to remember our recent reports, Azusa Now, Catholics and…Greg Laurie? and, “Together 2016”: Denominations link arms with Chrislebrities to erase doctrinal divisions, and, Calvary Chapel Pastor Posts Photo Standing With New Age Advocate Roma Downey.  Bud Ahlheim over at Pulpit And Pen captures a growing concern Laurie’s increasing fascination with false teachings and unholy alliances: 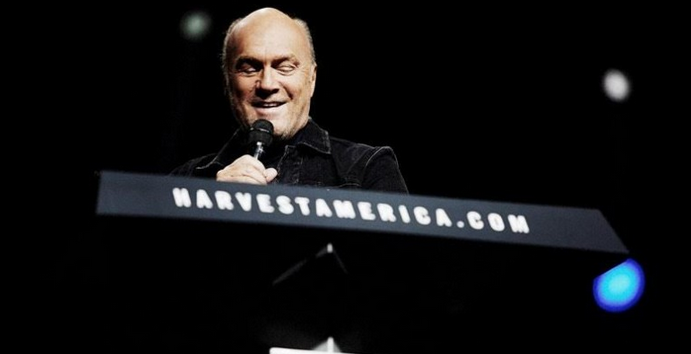 The Baptist Press features an article highlighting the March 6 Harvest America crusade in Texas (and worldwide via live-streaming) led by megachurch pastor Greg Laurie. The article, entitled Harvest America Event Sees 25,000 Professions of Faith, includes a summary of these “professions”:

While Southern Baptists of Texas Convention were supportive of Laurie’s crusade, by providing counselors for the event and simulcasting it in churches around the state, there is much about Laurie that is decidedly outside the traditional beliefs of Southern Baptists.

Yet, on the heels of such attention-grabbing headlines, The Christian Index, the newspaper of the Georgia Baptist Convention, reported on March 9 that Laurie will take his crusade to Atlanta in September 2016 and Arizona as part of the SBC Crossover in 2017.

Baptists are embracing this. But should we?

Professions of faith in our Finney-esque, “all heads bowed, all eyes closed,” “raise that hand,” “repeat this prayer” altar call environment are as easy to elicit as getting Kenneth Copeland to speak in tongues for the promise of a seed faith donation. (Copeland will be joining Ronnie Floyd, current SBC president, at the upcoming “The Gathering”, by the way.)

We are too apt to rest in a bare profession of faith, and to think that this will save us; it is a cheap and easy religion to say, ‘We believe in the articles of the Christian faith’, but it is a great delusion to imagine that this is enough to bring us to heaven.

It appears that Laurie likewise does not recognize a profession of faith as authentic evidence of possession of faith. But for Laurie, it’s not because the guideline of authentication that Scripture actually implies–evidence of sanctification.

According to the Statement of Faith on Harvest.Org, Laurie rightly includes “water baptism” as a scriptural practice. While confirming that water baptism is not salvific, Laurie’s “What We Believe” page features an element of faith conspicuously missing from the Baptist Faith And Message: “Baptism of the Holy Spirit”.

Folks, we’re now entering TBN fantasy land here. Please fasten the seat belts on your pews.  Usher in the charismatics, please.  Someone queue up the fog machine!   Get ready the tambourines, pew hopping, gibberish utterances, word of faith, the whole shebang!  Come get an anointing!

Laurie affirms the indwelling of the Holy Spirit at the moment a sinner is saved. But like a Sham-Wow infomercial for the Holy Spirit, he declares, “BUT WAIT, THERE’S MORE!”

To be an authentic Christian, it seems, you must get an extra-special, gift endowing baptism! Laurie may endorse “one Lord and one faith”, but he clearly promotes two baptisms.  After water baptism, the real believer still needs the “baptism of the Holy Spirit”.  Laurie’s site describes it:

Baptists have not historically supported such charismatic influences. Nor have we distinguished a separate “baptism of the Holy Spirit”. Rather, Baptists have rightly sided with the Apostle Paul when he declares “one Lord, one faith, one baptism” (Eph. 4:5)

Other than prescribed church offices, exactly where does Scripture teach the believer must be further qualified for Christian service?   Where is the baptism of the Holy Spirit prescribed?

Acts describes the introduction of the Holy Spirit in a profoundly new way in the embryonic church. As John MacArthur explains,

To say that you get the Holy Spirit later, after salvation because the apostles did is to misunderstand the redemptive history of God. The Spirit came here (at Pentecost) because this was the time for the Spirit to come. And there had to be a beginning. It is not to say that this is the example of every Christian who then gets the Spirit X number of years after his salvation. Not at all.

The SBC has never officially espoused the notion that “believers also need the baptism of the Holy Spirit”. However, if you’ll be noble and check out almost any Word Faith, Prosperity Gospel heretic, you’ll find that “baptism of the Holy Spirit” is prevalent.  According to Kenneth Copeland’s website, “After you become a new creation, however, it is God’s will that you be baptized in the Holy Spirit with the evidence of speaking with other tongues.”

Hmm.  “Other tongues,” another missing element from the Baptist Faith and Message. (But one that is apparently embraced by the presumptive next President of the Convention, J.D. Greear. In the Christian Post, he says it’s a “sin to forbid speaking in tongues.”)

It’s incredible when someone, by God’s grace, is authentically saved. Baptism is a wonderful testimony to the continuing truth of Jesus’ mission and the promises of His Word. But to go beyond that Word, and suggest such a clearly false teaching as extra baptisms, is not merely a slight theological difference.   It is violence to God’s Word to proclaim anything other than “one Lord, one faith, one baptism”.

There seems to be a battle in the SBC, will its acronym come to mean “Slowly Becoming Catholic”, as Russell Moore might prefer, or will it mean “Surely Becoming Charismatic?” Whichever result wins, it wins at the disregard of Scripture.

When we open the door to altering Scripture or adding to it,  where does it stop?  If “baptism of the Holy Spirit” leads to tongues, as Copeland says, what do “tongues” lead to?  It leads to what is proclaimed in so many Charismatic churches–the Prosperity Gospel.  And where does the prosperity gospel lead?  Umm, HELL.  (Better enjoy your “Best Life Now”, cuz it ain’t getting any better!)

Baptists who should decry this, though, are settling in with Laurie, and his addition to Scripture.  Greg Laurie will be a featured speaker at the 2016 SBC Pastors’ Conference. Next thing you know, we’ll look in the Baptist Press and find the Lottie Moon offering replaced with a collection to buy Creflo a jet!  It’s what happens when you disregard Scripture.  And that’s just what the SBC is doing.

About our acronym?  One thing is evident, “S.B.C.” doesn’t mean “Solidly Biblically-Centered”.

And that … that is a shame.

7 Responses to Greg Laurie and the SBC: “Surely Becoming Charismatic”