Posted By Amy Spreeman on September 26, 2016 in Discernment 22
Share 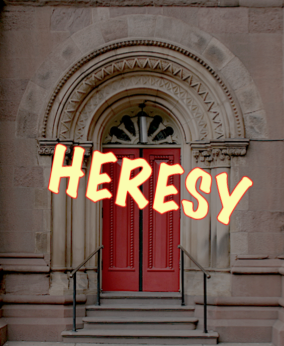 Heresy is a false teaching about the essential doctrines of our faith – the ones we must adhere to, regarding who God is, who Jesus is, salvation by grace, and Jesus’ resurrection. Non-essential beliefs are certainly worth discussing with passion (and love of course), but not to the point where those who hold opposite non-essential beliefs are considered heretical. It is also important to remember that sanctification (our growth in holiness, truth, and wisdom), often is on a different timeline from other brothers and sisters in Christ.

So what constitutes a heresy? There’s no better resource than what CARM (Christian Apologetics & Resource Ministry) has put together on the subject. At the bottom of this article is a list of heresies determined by church councils throughout the centuries, with links and explanations:

“Error, indeed, is never set forth in its naked deformity, lest, being thus exposed, it should at once be detected. But it is craftily decked out in on attractive dress, so as, by its outward form, to make it appear to the inexperienced (ridiculous as the expression may seem) more true than truth itself,” (Irenaeus Against Heresies 1.2).

The word “heresy” comes from the Greek ‘hairesis’ which means “choosing” or “faction.” At first, the term heresy did not carry the negative meaning it does now. But, as the early church grew in its scope and influence throughout the Mediterranean area, various teachers proposed controversial ideas about Christ, God, salvation, and other biblical themes. It became necessary for the church to determine what was and was not true according to the Bible. For example, Arius of Alexandar (A.D. 320 ) taught that Jesus was a creation. Was this true? Was this important? Other errors arose. The Docetists taught that Jesus wasn’t human. The Modalists denied the Trinity. The Gnostics denied the incarnation of Christ. Out of necessity, the church was forced to deal with these heresies by proclaiming orthodoxy; and in so doing, condemnation upon these heresies and the heretics became a reality.

Unfortunately, some of those who attempted to defend and establish the truth did so by killing those who disagreed with them. What would prompt such hostile actions against those who merely had “differences of opinion” on biblical subjects? The answer may not ever be fully known, but I offer this explanation.

Theologically, the Bible teaches condemnation upon false doctrines and false teachers. Gal. 1:8-9 says, “But even though we, or an angel from heaven, should preach to you a gospel contrary to that which we have preached to you, let him be accursed. 9 As we have said before, so I say again now, if any man is preaching to you a gospel contrary to that which you received, let him be accursed.” (See also 1 Cor. 16:22; 2 Cor. 11:13-15; 1 Tim. 1:18-20; Titus 3:10) Why is this taught in the Bible? The reason is simple. Christians are saved by faith in the work of Jesus on the cross, but faith in itself is not enough. Faith is not a substance you can put in a jar. It is belief in something. Faith is only as good as who it is placed in. If you put your faith in a false God, you are lost because a false god cannot save anyone. This is why God says in Exodus 20:3, “You shall have no other gods before Me.” Faith is not what saves, but faith in the true God is what saves. (read more here on What is heresy?)

Is Kris Vallotton Embracing Anti-Trinitarian Heresy?
Is John Piper Disqualifying Himself As A Teacher?

22 Responses to What is Heresy?